Carp Swimming Against a Waterfall, 1852

“Considered the last great master of the ukiyo-e genre (“pictures of the floating world”), the Japanese artist Utagawa Hiroshige (1797–1858) was a hugely influential figure, not only in his homeland but also on Western painting. Towards the end of the nineteenth century, as a part of the trend in “Japonism”, European artists such as Monet, Whistler, and Cézanne, looked to Hiroshige’s work for inspiration, and a certain Vincent van Gogh was known to paint copies of his prints.

“Hiroshige was born in 1797 to a samurai family in Edo (modern Tokyo). After his parents died, around the age of fourteen, Hiroshige began to take up painting and studied for several years under the artist Toyohiro. During this period he produced many works reflecting traditional ukiyo-e themes such as women and actors, but upon Toyohiro’s death in 1928 he underwent a pronounced shift to toward the landscapes for which he best known today, as well as bird and flower images. His most famous series include Famous Views of the Eastern Capital (1831), The Fifty-three Stations of the Tōkaidō (1833–1834), The Sixty-nine Stations of the Kisokaidō (1834–1842) and Thirty-six Views of Mount Fuji (1852–1858). 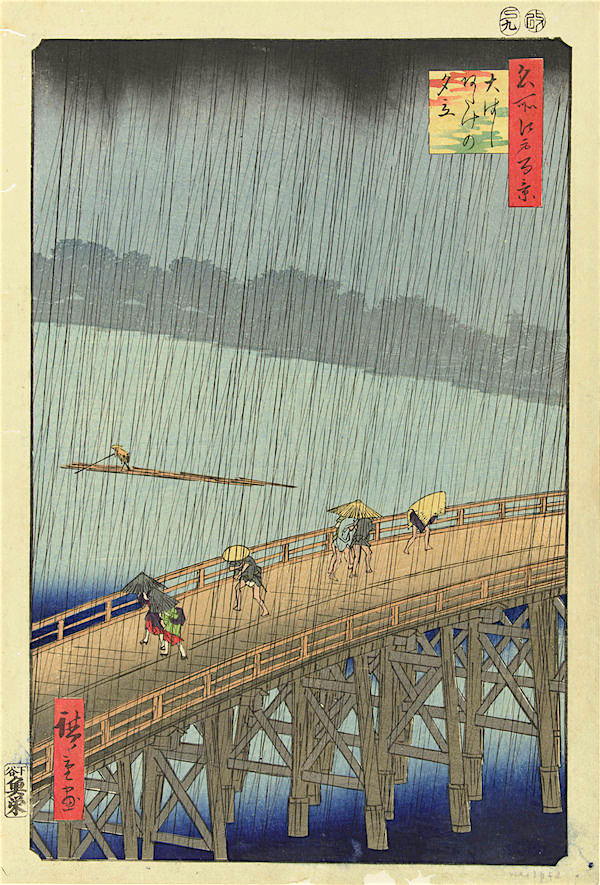 Unexpected Rainfall on the Big Bridge at Atake, 1857

“In 1856, around the age of 60, Hiroshige “retired from the world”, becoming a Buddhist monk. Two years later he passed away (during the great Edo cholera epidemic, though it’s not known if this was the cause of death) and was buried in a Zen temple in Asakusa. Just before his passing, he wrote the following poem:

I leave my brush in the East
And set forth on my journey.
I shall see the famous places in the Western Land.” 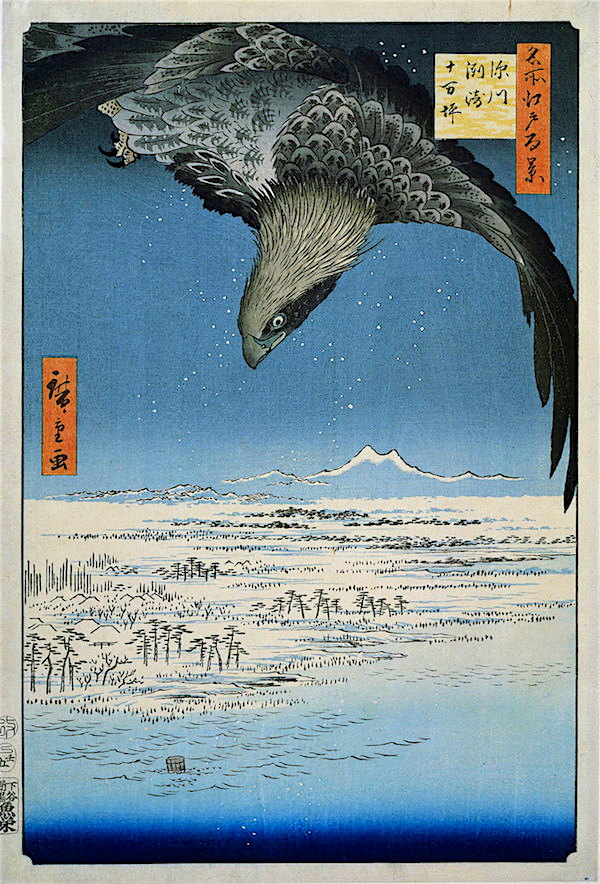 Jumansubo Plain in Susaki near Fukagawa, 1857

Across his lifetime Hiroshige is thought to have produced a colossal 8000 prints,

More at The Public Domain Review

Next post: Let’s Review 68: Of Cheese and the Cutting Thereof