The Curious Death and Last Wish of Justice Ginsberg 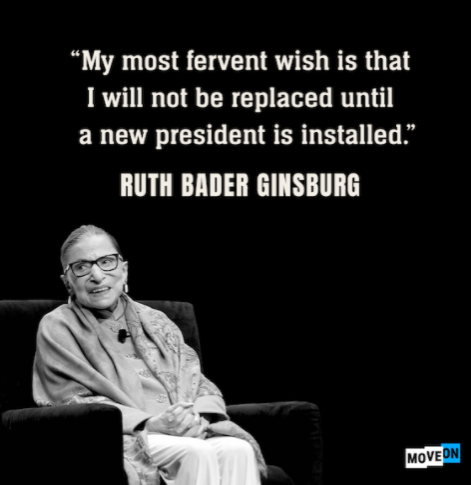 A Death announced just before the Weekend Riot Hours? A curiously stupid “fervent wish” announced by her granddaughter? It’s like watching the Biden automata rolled out of the recharging bay with the BlueTooth charging socket in his heel.

Who knows what she said and when she said it other than the pack of political liars that form the phalanx of her friends and family?

Who really knows when she actually died?

Given the ability of the DemoComms to control news and the news cycle, Ginsberg could have been dead for months and been given the full Lenin’s Tomb waxjob and held at “Ready to Launch.”

UPDATE: Trump casts doubt on Ginsburg statement, wonders if it was written by Schiff, Pelosi or Schumer

President Trump cast doubt in a Monday interview on Fox News that Justice Ruth Bader Ginsburg’s dying wish was that her replacement on the Supreme Court not be picked by Trump, saying those words might have been “written by Adam Schiff, Schumer or Pelosi.”

Althouse: Let’s look at Ginsburg’s language: “I will not be replaced until a new president is installed.”

Justice Ginsburg exercised her own will by holding on to the seat despite grave illness, and there was some ability to choose who would take her place, but the force of nature kept her from completing that task. The Constitution gives the appointment power to the President, and a Supreme Court Justice cannot grab that power from him.

Previous post: And Now for Something Completely Different: “Infinity is bigger than you think.”