The Confederate States of America? Not So Fast by Hale Adams 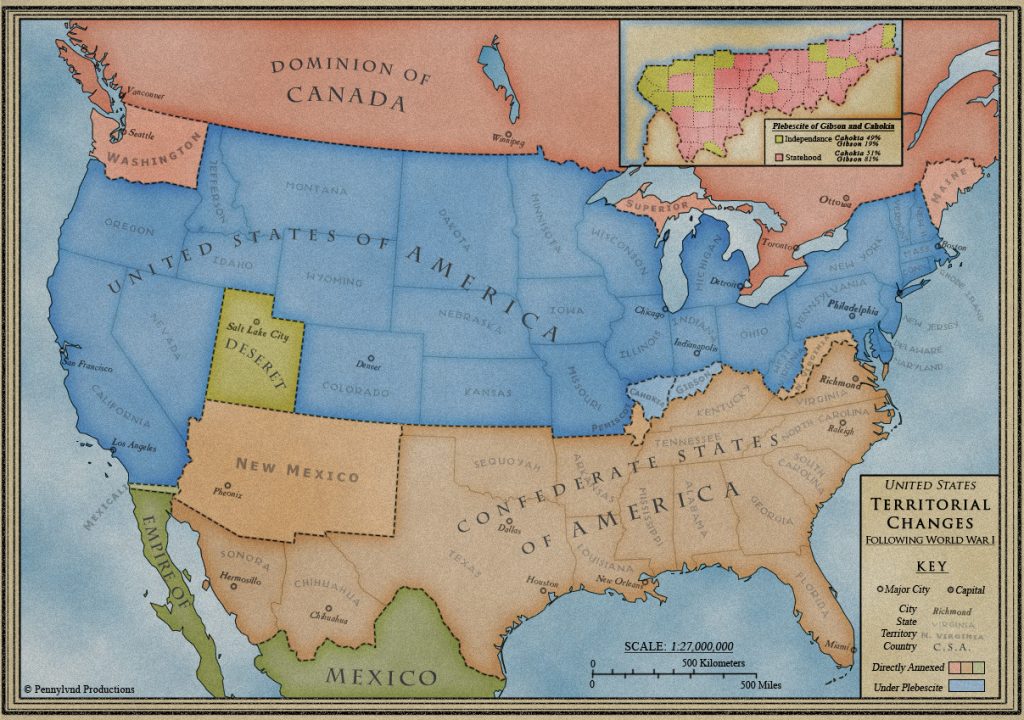 [ Hale Adams comments to ghostsniper in The Declaration Is Final ]

I would agree that democracy has its flaws — it’s been described by some (for instance, Jerry Pournelle, the noted science-fiction writer) as “two wolves and a sheep voting on what to have for lunch”. I think Winston Churchill described it as “the worst possible form of government, except for all the others”. At worst, it can be something akin to mob rule, which is why the Framers put various anti-majoritarian features in the federal Constitution, some of which have been undone by Progressives over the last century or so — see, for instance, the Seventeenth Amendment.

As for your fuming about Lincoln being a tyrant, and it being a bad thing that the South lost the war, I’m not unsympathetic — I think it was Gale Norton, George W. Bush’s Secretary of the Interior, who noted that “the States lost too much after 1865”, and she was right — the tendency since then has been to regard the states as mere departments of the central government, on the French model.

(You knew that was coming, didn’t you? *wry smile*)

…. I think your moaning about Northern tyranny and Southern virtue puts you on a par with Faulkner’s 14-year-old boy (see Gerard’s post a page or two back) — not wrong, necessarily, but not right, either.

The science-fiction writer, Harry Turtledove, has written a long (9 or 10 volume) series imagining a world in which the South won the Civil War at Antietam — he imagines that a Confederate courier did NOT lose a message, which then did NOT fall into the hands of the Northern generals, who then did NOT have a clue what the South was up to, which in turn resulted in the Northern army having its collective backside handed to it. With the North utterly defeated at Antietam, the South was able to bring the North to the peace table and win its independence.

In Turtledove’s alternate universe, the South allies itself with Second Empire France, Great Britain, and Imperial Russia, while the North falls under the spell of Imperial Germany. North America becomes an unquiet place, with Civil War II being fought in the 1880s (and the North gets spanked again, driving it farther into the arms of the Kaiser). World War I, with all its horrors of trench warfare, is visited on North America. The war ends in 1917, and the North is victorious with German help over the South, forcing harsh peace terms on it, and France, Britain, and Russia are likewise treated harshly by a victorious Germany.

The 1920s and ’30s see a slide all over the world toward authoritarism, and there is no UNIFIED United States present to counteract that slide. The USA and and CSA glower at each other along a fortified, 2,500-mile long border, and the South is just itching for revenge. The North has its hands full pacifying and absorbing Canada, and the South lapses into something like Nazi Germany, only with blacks becoming the object of race-hatred instead of the Jews.

And it gets worse from there …..

Yes, Turtledove may have an ideological ax to grind — given his background, he may well favor a strong central government with 20th-Century “liberal” ideals — but the man has a point. A world without the United States as it was after 1865 (however flawed the US was afterwards) would have been a scary place — there would have been no countervailing force working against the various European empires, and Imperial Germany under Kaiser Wilhelm II was (I think) rotten at its core. It may have been more benign had Frederick III not died in 1888 after just 99 days on the throne, but Bismarck built the Imperial constitution in such a way that capture of the Imperial government by military interests was inevitable.

As an aside, Japan’s Meiji Constitution of 1890 had the same flaw — the military was NOT subject to the civilian government. The military did not answer to the prime minister, but to the Emperor, allowing it to do an “end run” around the civilian leadership. Worse, the Imperial Rescript of 1905 dictated that the Minister of the Navy and the Minister of War had to be serving officers. The civilians might offer the posts to an officer, but if the Army or Navy said “no”, the officer couldn’t serve (obviously). So, the government would collapse because a Cabinet could not be formed. This veto-power over the very formation of a government explains the slide of Japan into a de facto military dictatorship after 1930.

Imperial Germany had the same problem. World War I didn’t end in part because the German military wouldn’t let it end — they had the ear of Wilhelm II as “supreme warlord”, and he was too dysfunctional to tell the Army where to go.

Ghost, is the country we now have ideal? No, of course not. Is the best we could hope for, given the facts of 1865? Probably. I’m sure you’re enough of an engineer to appreciate the saying, “The best is the enemy of the good enough”.

It seems to me that the country our great-great-grandparents gave us is “good enough”.

My two cents’ worth (sorry about the length of the comment),