The Burning of the New York Marine Hospital

FILE UNDER: “Those who will not learn from history will be defeated” 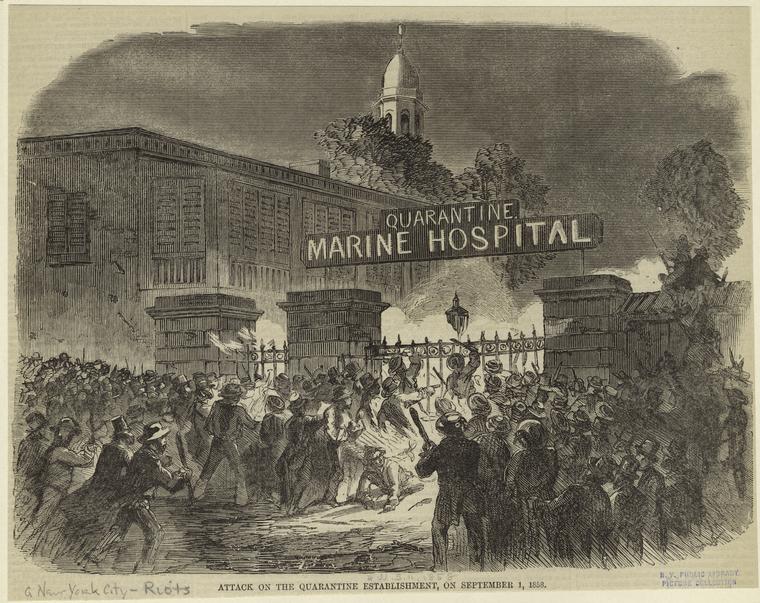 The Staten Island Quarantine War was a series of attacks on the New York Marine Hospital in Staten Island—known as “the Quarantine” and at that time the largest quarantine facility in the United States—on September 1 and 2, 1858.

The attacks, perpetrated mainly by residents of Staten Island, which had not yet joined New York City, were a result of longstanding local opposition to several quarantine facilities on the island’s East Shore. During the attacks, arsonists set a large fire that completely destroyed the hospital compound. At trial, the leaders of the attack successfully argued that they had destroyed the Quarantine in self-defense. Though there were no deaths as a direct result of the attacks, the conflict serves as an important historical case study of the use of quarantines as a first response.

Yellow fever returned to Staten Island in August 1858. Locals were quick to blame the outbreak on workers from the Quarantine. In August 1858 the Castleton Board of Health passed ordinances encouraging local residents to take action against the Quarantine. When New York City officials sought an injunction against the Castleton Board of Health, locals responded by threatening to burn down the Quarantine. In retaliation, the City shut down the Staten Island Ferry, ostensibly on health grounds. At this point, locals began to stockpile hay and other flammable materials.

On September 1, 1858, the Castleton Board of Health passed the following resolution: “[The Quarantine is] a pest and a nuisance of the most odious character, bringing death and desolation to the very doors of the people….Resolved: That this board recommend the citizens of this county to protect themselves by abating this abominable nuisance without delay.”

Locals acted quickly following the passage of the Castleton Board of Health resolution. At dark, two large groups assaulted the Quarantine: one broke down the gate, the other scaled the wall on the opposite side of the compound. The attackers removed patients from buildings and then systematically used mattresses and hay to set every building on fire.

The New York Times reported that the conflagration illuminated the bay and the entire east side of Staten Island. Efforts by employees or firemen to combat the blazes were met by violence; one stevedore was shot. One of the leaders of the attackers, Ray Tompkins (a grandson of former Governor Daniel D. Tompkins) convinced the crowd to spare the medical staff from physical violence. In addition, Tompkins struck a deal with Quarantine staff to leave the Female Hospital standing in exchange for the release of attackers who had earlier been apprehended by Quarantine officials.

The attackers also battered down large sections of the wall surrounding the Quarantine. Two men died in the night, one from yellow fever, and one Quarantine staff member who was murdered by a co-worker. New York City officials were slow to react both because of the health risk posed by sending police officers into a quarantine zone and the likelihood of violence.

The following day a handbill appeared posted throughout Tompkinsville. The handbill read:

A meeting of the Citizens of Richmond County, will be held at Nautilus Hall, Tompkinsville, this evening, September 2 at 7 1-2 o’clock [sic], for the purpose of making arrangments to celebrate the burning of the shanties and hospitals at the Quarantine ground last evening, and to transact such business as may come before the meeting. September 2nd, 1858.

Several hundred individuals attended the meeting and then proceeded to the Quarantine. The crowd burned down the Female Hospital and the piers.

The police arrested several leaders of the attack, including Ray Tompkins, on September 4. At trial, the defendants argued that they had destroyed the Quarantine in self-defense. The presiding judge agreed. He noted that patients had been removed and that the local health board had previously identified the facility as a danger to the community. “For these reasons,” he concluded, “I am of opinion that no crime has been committed, that the act, the necessity of which all must deplore, was yet a necessity not caused by any act or omission of those upon whom it was imposed, and that his summary act of self-protection, justified by that necessity and therefore by law, was resorted to only after every other proper resource was exhausted.”

FULL REPORT IN PDF: THE QUARANTINE WAR: THE BURNING OF THE
NEW YORK MARINE HOSPITAL IN 1858

Next post: RTWT of the Day: VIPS — The Real Very Important People in America