The 5 basic laws of human stupidity, according to Cipolla 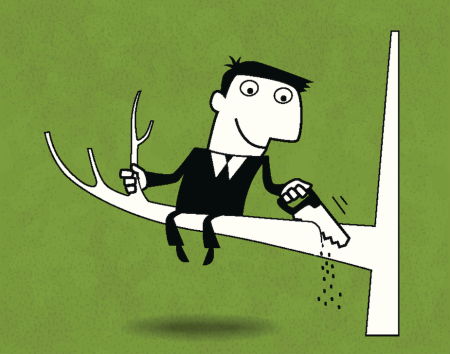 Published on November 2, 2021 Written by psychology-spot.com

“The stupid ones are more fearsome than Mafia, the military-industrial complex or the Communist International. They’re an unorganized group, without a leader or norm, but in spite of that, they act in perfect harmony, as guided by an invisible hand.

“With the smile on his lips, as if he were doing the most natural thing in the world, the stupid will appear on the spur of the moment to spoil your plans, destroy your peace, complicate your life and work, make you lose money, time, good humor, productivity, and all this without malice, without remorse and without reason. Stupidly.”

These are the words of the famous professor of economic history Carlo Cipolla, who taught at the universities of Pavia and Berkeley and published academic works in which he analyzed overpopulation throughout history but passed to posterity thanks to his “Theory of Stupidity”, condensed in his book “The Basic Laws of Human Stupidity”, a treatise on human stupidity with satirical overtones.

The 5 basic laws of human stupidity

1. Always and inevitably, each of us underestimates the number of stupid individuals in the world

That there are stupid people in the world is well known. But Cipolla was convinced that we underestimated their number and influence in our lives and in society. He stated that “any numerical estimate would prove to be an underestimate”.

It’s enough thinking, for example, of those people we classified as intelligent but who suddenly begin to behave in a foolish and obtuse manner. Or it’s enough going out to the street to see how many people insist on hindering us, for no apparent reason other than stupidity.

2. The probability that a certain person is stupid is independent of any other characteristic of the same person

Cipolla was convinced that stupidity was another characteristic, like blond hair or black eyes. Therefore, it’s distributed in all circles of society in a more or less similar proportion. He cites a study on the level of stupidity in the four large strata that make up universities: beadles, employees, students, and teachers. In this analysis, it was found that the distribution of stupidity was uniform, no matter how much we ascended in the educational level.

“Whether you practice elegant circles or you take refuge among the Polynesian head cutters, you lock yourself in a monastery or decide to spend the rest of your life in the company of beautiful women, the fact remains that you must always face the same percentage of stupid people”, he concluded.

3. A stupid person is one who causes harm to another person or group without at the same time obtaining a benefit for himself or even damaging himself

Cipolla didn’t consider stupidity a matter of intellectual quotient, but rather a lack of relational intelligence. He started from the idea that by relating to each other we can obtain benefits for ourselves and for others or, on the contrary, cause harm to ourselves and to others. A stupid person is one who harms others and also himself.

His behavior is irrational and difficult to understand, but it’s likely that you remember more than one person who blocked your way, generating difficulties, frustrations, and prejudices, even if they didn’t gain anything at all. According to his theory of human stupidity “There are people who, with their unlikely actions, not only cause harm to other people, but also to themselves. These people belong to the superstupid genre”.

According to Cipolla, we continually forget the danger that stupid people represent. He says that “Stupid people are dangerous and unfortunate because reasonable people find it difficult to imagine and understand a stupid behavior.”

Generally, their attack takes us by surprise and even when we suffer it, we find it difficult to organize a rational defense because the attack itself lacks rationality. By underestimating their power, we remain vulnerable and, therefore, at the mercy of their unpredictability.

We can also fall into the error of thinking that a stupid person can only hurt himself, that we’re immune to his actions, but with thinking this way we confuse naivety with stupidity and, believing ourselves invulnerable, we lower our defenses.

5. The stupid person is the most dangerous person that exists

“All human beings are included in four fundamental categories: the naive, the intelligent, the evil, and the stupid […] The intelligent person knows that he’s intelligent. The evil one is aware to be evil. The naive is painfully imbued with the sense of his own candor. Unlike all these characters, the stupid doesn’t know to be stupid. This contributes to giving greater strength, incidence, and effectiveness to his devastating action. The stupid is not inhibited by self-consciousness”, wrote Cipolla to outline the last fundamental law of human stupidity.

Cipolla represents in this graph the 4 types of people taking into account who benefits or harms their behavior: 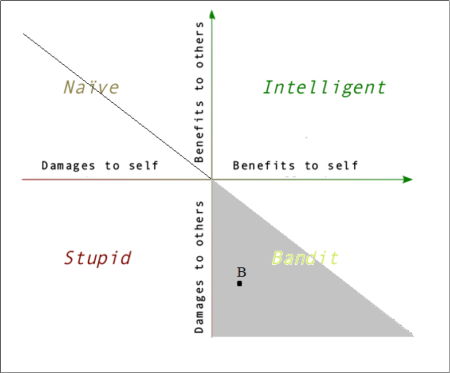 And he also warns us that “Some stupid people usually cause only limited damages, but there’re others that cause terrible damage, not just to one or two individuals, but to communities or entire societies. The ability to hurt of a stupid person depends on the […] position of power or authority he occupies in the society.”

How to protect yourself from human stupidity?

“Intelligence and stupidity are not the opposite of one another, nor is stupidity the lack of intelligence, but intelligence is the product, more or less unsuccessful, of a continuous series of attempts to dominate or escape, the stupidity that constitutes everything that is human”, wrote Matthijs Van Boxsel.

Beyond labeling people, it is important to understand the risks that represent stupidity. Actually, we can all behave stupidly, if we don’t measure the scope of our actions or words. If we don’t develop critical thinking and forget the necessary introspection, we can become victims of stupidity, suffering it or exercising it.

A very interesting study conducted at the Eötvös Loránd University gives us other clues to gain self-consciousness in determining the 3 causes of human stupidity:

1. Ignorance or overconfidence. It would be the highest degree of stupidity and appears in people who take risks of any kind, although they lack the skills or knowledge necessary to face them.

2. Lack of control. It’s a medium degree of stupidity that corresponds to impulsive people, who lack self-control and act letting themselves be carried away by the first impulse.

3. Distraction. It would be the slightest degree of stupidity, which manifests itself in those who fail to achieve something because they don’t pay attention or don’t allocate sufficient resources, struggling uselessly.