Terra Incognita: “Reflecting Everything…. Every Thing We Are.” 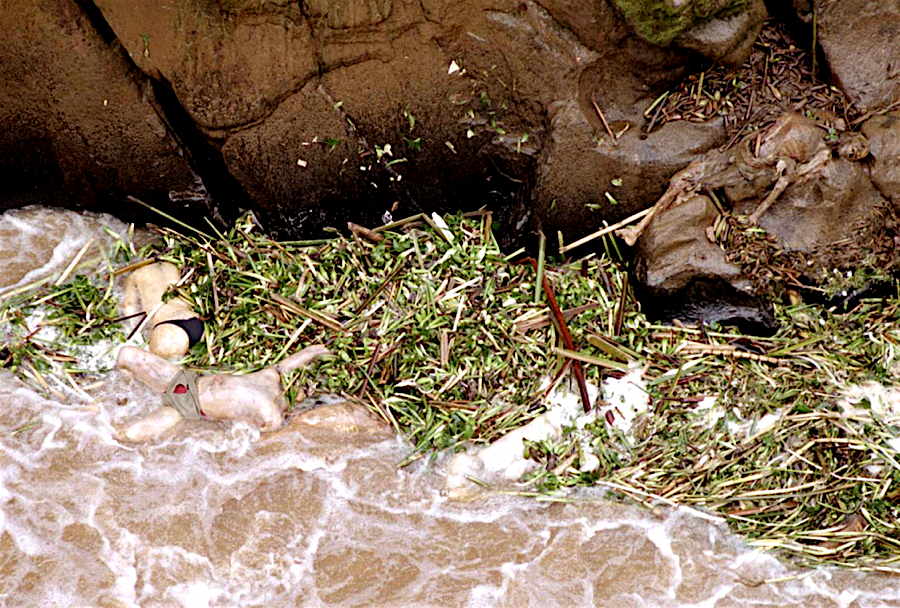 1.
This rusted field, these shattered skulls…
…This stained and rutted ancient road that runs…
…That runs beside the river of civil war
Where the molting carp roil and fatten
On bloated children, on shoals of human offal
And then drowse sated in the fetid slime.

This is the Palace of Dust where the shallows,
Stagnant, show the crocs’ warm morning meals —
The cracked bones glued with a woman’s gristle,
The infant’s rags caught between the pointed teeth
Like some vile floss formed from shredded tendons,
With all once-breathing flesh consumed.

And on the shore in the baking heat
The severed ears of women, dry and crisp,
Whirl in the drought’s dust devils,
Hearing death’s dirges declared
All along the abandoned watchtowers…
And so…
And so…
… And so one wades hip-deep into thick pools of dark blood…
All watched over by the cadaverous dead
Stacked waiting on the sun-bleached shore…

(But drift down not like leaves
In some pretty autumn breeze;
Nor in some poem of lace,
Nor zen-fresh airless space,
Some trifle of moss and leaves.
Nor mincing celebration
Of some dead god’s grace.)

Drift down like chunks of poaching pork,
Bobbing in some cartoon cannibal’s cauldron
Until your soul itself is bleached, scraped bare,
Flayed open, raw, exhausted of all care,
Exhausted of all rage —
Until the phrase
“Can you imagine?” is answered
Only with one word, “No.”
Until the only image that might impinge
On Democracy’s Dwellers slumped in
Their beaten down beanbag chairs
While watching the News ooze in
Is blood erupting in a syringe
Plunged into an eye, that the souls that see
Blind themselves at last with sleep,
And away,
Turn away,
Turn away,
Turn away.

10.
Starved soldiers sunken in stupor
Behind their tin tripwires strung
Where trees dance without wind,
And sleepless sirens slash the dark,
Where fingernails scratch last letters in sand.

In the room of crystal walls and iron floors,
Our trophies sigh under waves of  pleasure’s gore:
Clad in skin suits of screams and dried weeds,
Sewn by broken fingers with strips of flayed reeds.

( And I looked and saw your body’s banner bright
Against the umber buildings as a silver jet slicked by
Lined out against the sunset sky
Like love’s true arrow.
And the clouds rose above night  in golden blooms
Against the jadegleamed wall of trees
Until the white gull pirouetted down,
Down on evening’s fade.
And your love’s warm wine was cold upon my lips.
And like all men, I wished to live
The life of the body forever,
As it was in the beginning,
Is now and ever shall be:
World without End.

The infant’s corpse bobbing in the scum
In the brackish backwaters of Lake Victoria.
And the eye of that corpse seen smeared in scum
Was stained like urined snow.
And the dead iris of that eye was surrounded by scarlet,
And rising within the center of that dead iris
Daubed pale beneath the bright noon sky,
I looked and saw our dead moon rising there,
Rising dead above us all so that the infant’s eyes were reflecting. . . .

Reflecting everything we are.

Reflecting
Everything, everything…
Every Thing
We are.