Sweeping Up the Dead Leaves in the Labyrinth 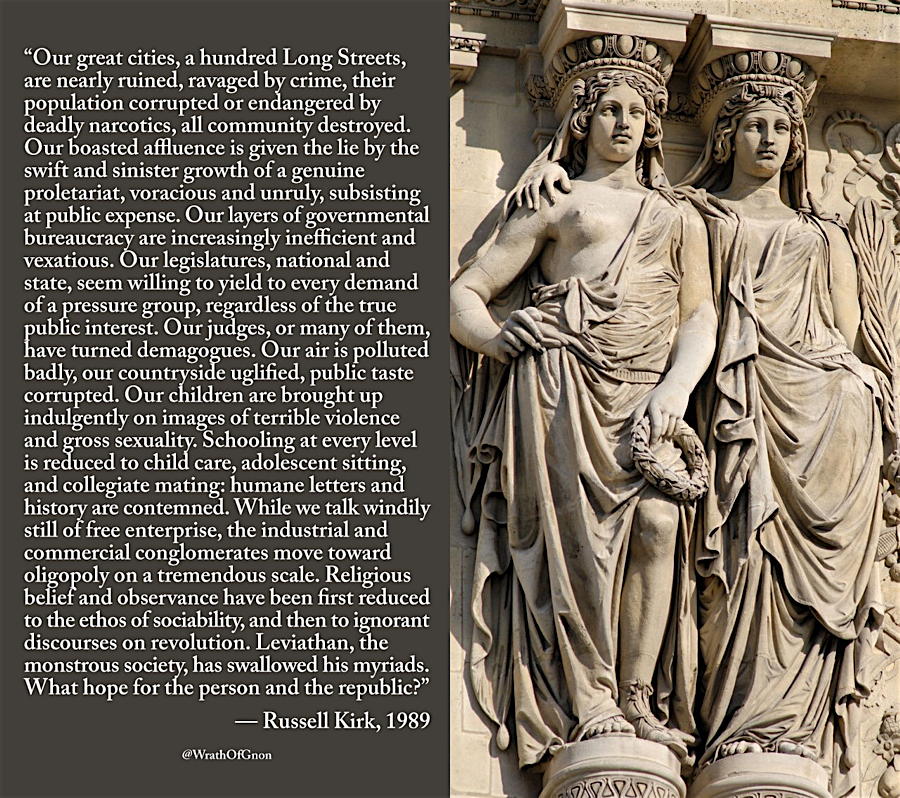 “Our great cities, a hundred Long Streets, are nearly ruined, ravaged by crime, their population corrupted or endangered by deadly narcotics, all community destroyed. Our boasted affluence is given the lie by the swift and sinister growth of a genuine proletariat, voracious and unruly, subsisting at public expense. Our layers of governmental bureaucracy are increasingly inefficient and vexatious. Our legislatures, national and state, seem willing to yield to every demand of a pressure group, regardless of the true public interest. Our judges, or many of them, have turned demagogues. Our air is polluted badly, our countryside uglified, public taste corrupted. Our children are brought up indulgently on images of terrible violence and gross sexuality. Schooling at every level is reduced to child care, adolescent sitting, and collegiate mating: humane letters and history are contemned. While we talk windily still of free enterprise, the industrial and commercial conglomerates move toward oligopoly on a tremendous scale. Religious belief and observance have been first reduced to the ethos of sociability, and then to ignorant discourses on revolution. Leviathan, the monstrous society, has swallowed his myriads. What hope for the person and the republic?” — Russell Kirk, 1989 From Russell Kirk’s 1989 The Attack on Leviathan: Donald Davidson and the South’s Conservatism. 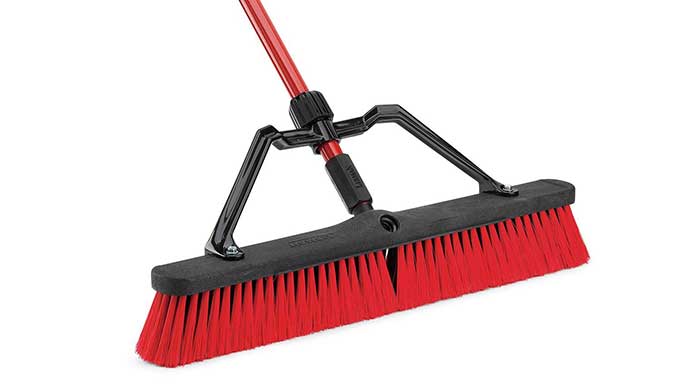 Libman 24″ Multi-Surface Heavy Duty Push Broom The construction of this wide push-broom from Libman is very superior. It has a bank of bristles that is three inches deep, quite dense, and embedded in a tough-looking resin that in turn is part of the brush-head. The pole and its socket are polypropylene, a stable artificial material. The pole is a single piece that is hollow and doesn’t weigh much. It has reassuring side braces that are lacking in the competitive O-Cedar & Weiler models. It captures more debris in one sweep than my other brooms do in two. What it doesn’t get on the push stroke, it mostly gets on the pull stroke. It looks sharp, and presumably it won’t “weather” the way my other brooms have. Its bristles are recycled. It’s made in the U.S. And the price is right: only $27 (and free shipping).

Larry Brooks accused of stealing $100,000 from armored truck on his first day of work Released on his own recognizance. Whatever can be the reason? 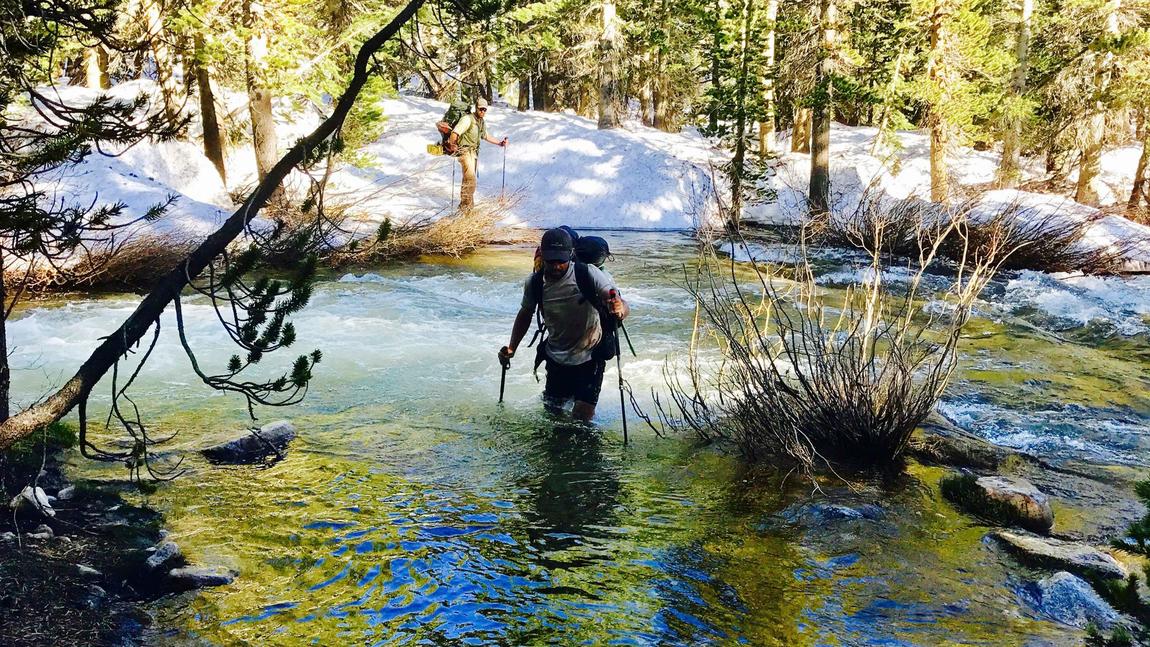 Global Warming Strikes Again! A wet winter makes some California hikes more treacherous than usual – “The velocity and the amount of gallons that are zooming by per second is pretty astounding,” Hiltz, who hiked the trail 10 years ago, said. He recalled one spot on the Southern California portion of the trail where he and Kellogg crossed “a churning, crazy rapid. Almost something that you can usually splash over without even getting your feet wet was chest-deep at least on me — I’m 6’3” — and flowing at an incredible rate.” 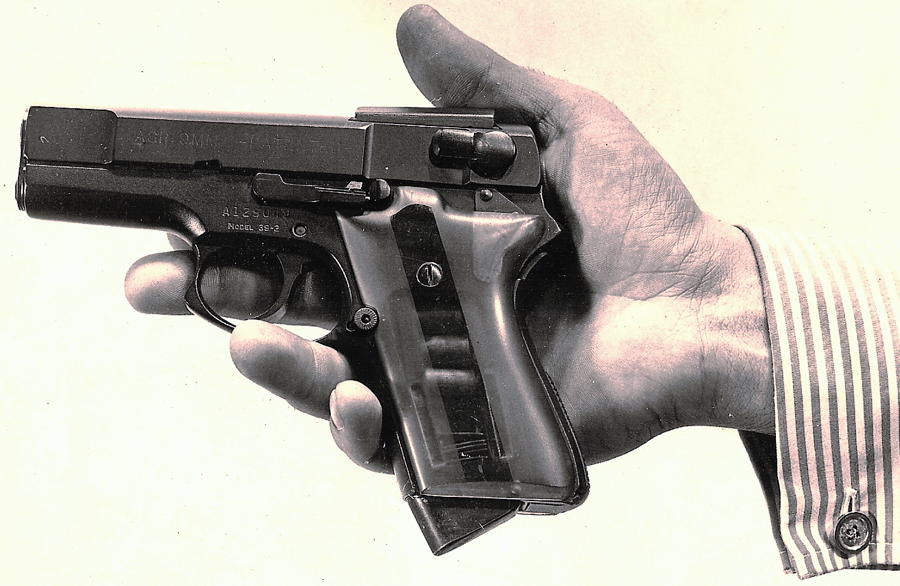 Cold War Mystery Pistol? The Story of the Revolutionary 9mm ASP The ASP was the result of some 212 modifications on the stock Model 39. The most dramatic modification was the reduction in the size of both the slide and frame. The slide and barrel were shortened by ｾ inch while the butt of the frame was reduced by 9/16 of an inch. Both reductions required extensive internal modifications with regard to the barrel bushing, recoil spring and guide, the mainspring and back strap assembly. To lighten the slide, the muzzle end was tapered. To further reduce the size, the hammer spur was removed and the thumb safety was shaved. Each pistol came with three reduced-size magazines that featured a patented finger rest base plate.

Even those who hate the NYT have to read it for their daily fix of HateTrump Heroin: Althouse: “The man who takes the aisle seat next to me looks about my age. He’s tall, walleyed and bushy browed. Cologne, khakis.” There’s so much detail about the man’s looks — and his writing — and yet there’s not the whiff of a hint about his ethnicity. This goes to show that in the NYT, your mind may be spiraling wackily out of control and yet you maintain stiff discipline in the crucial center of political correctness.

One can only break oneself upon the law. On breaking the law : To say that a human act is “unnatural” was, until very recently, to say it should not be attempted. There will be a cost, and the cost is very likely to exceed what the experimenter can afford. The cost may be displaced for a time, as the cost of our “gay revolution” has been displaced in the destruction of natural families. Governments may legislate such displacements of cost: they may tax A for the benefit of B. They are under the impression that they make the laws. But no such effort is sustainable. For in the end, we will see what the real Law says.

As Vox Day is fond of saying, in the future, your skin will be your uniform. Wear it with pride. Put another way, if being pro-white is only going to mean anti-black or anti-Jew or anti-Asian, then it is never going to be a useful identity group. It’s just going to be the nullification of other identity groups. That’s not a movement with a future, because it’s definition lies outside its control. It’s why feminism is curdling into a home for barren spinsters. It’s just a list of grievances. In order to avoid that fate, white identity is going to have to be a positive identity that defines itself, independent of the rest of the world. Positive and Negative | The Z Blog

Cholera’s not bad. It’s just drawn that way: When bacteria kill us, it’s more accident than assassination | Vibrio cholerae, the bacterium that causes cholera, is a good example. Scientists used to regard it as a human pathogen that spreads when the faeces of infected people seep into water supplies. We now know that it’s mainly a marine species that attaches itself to the shells of small crustaceans, and occasionally makes its way into our water supply. 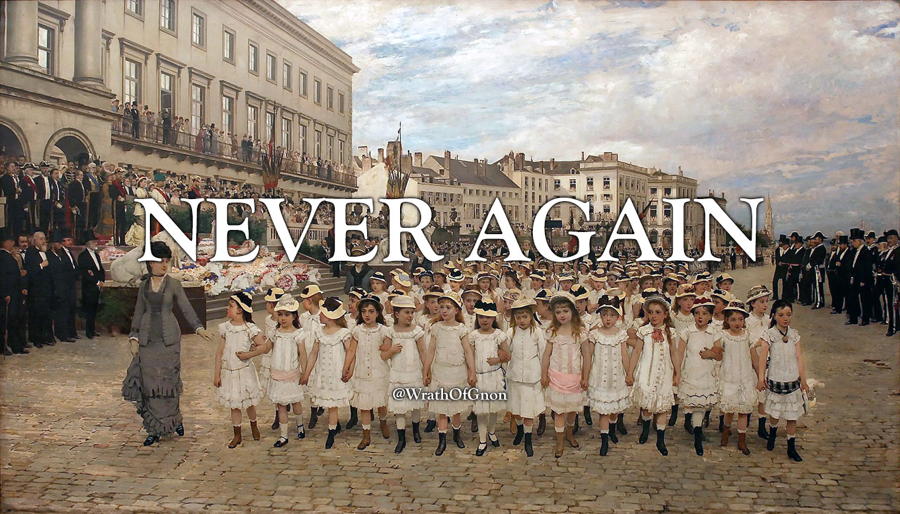 Next post: “Truth as a Possibly Illegal and Addictive Substance” | Van der Leun in The Saturday Evening Post