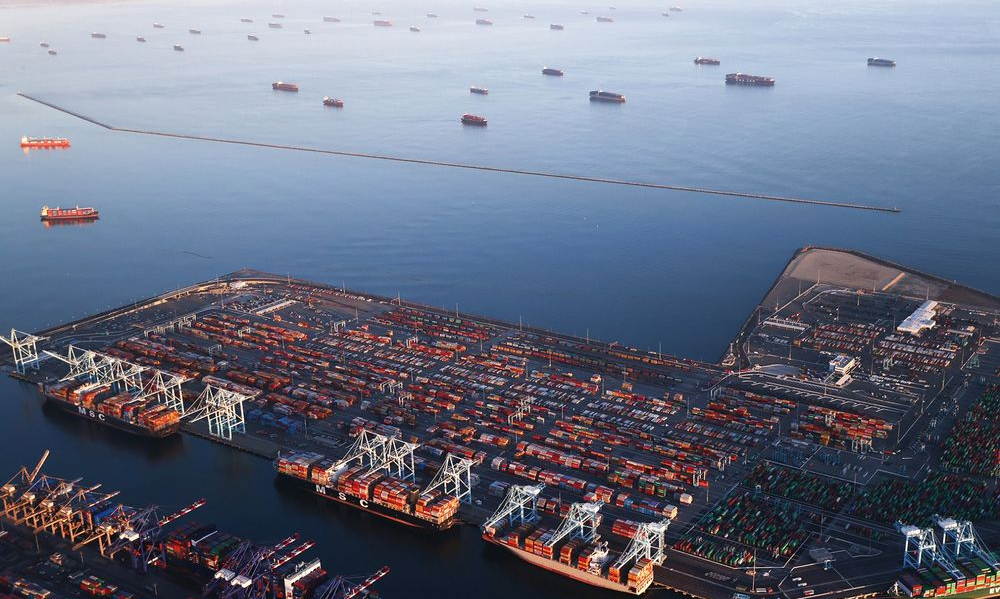 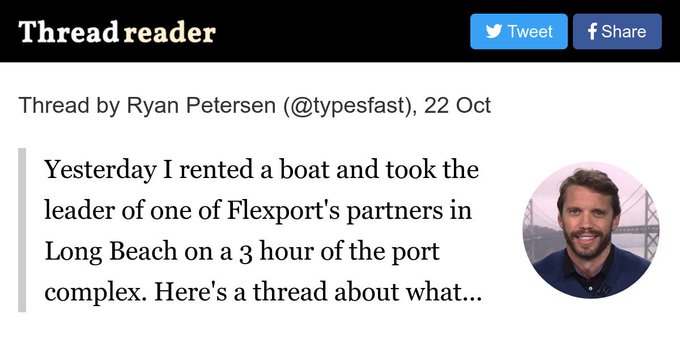 Yesterday I rented a boat and took the leader of one of Flexport’s partners in Long Beach on a 3 hour of the port complex. Here’s a thread about what I learned.

First off, the boat captain said we were the first company to ever rent his boat to tour the port to see how everything was working up close. His usual business is doing memorial services at sea. He said we were a lot more fun than his regular customers.
The ports of LA/Long Beach are at a standstill. In a full 3 hour loop through the port complex, passing every single terminal, we saw less than a dozen containers get unloaded.

There are hundreds of cranes. I counted only ~7 that were even operating and those that were seemed to be going pretty slow.
It seems that everyone now agrees that the bottleneck is yard space at the container terminals. The terminals are simply overflowing with containers, which means they no longer have space to take in new containers either from ships or land. It’s a true traffic jam.
Right now if you have a chassis with no empty container on it, you can go pick up containers at any port terminal. However, if you have an empty container on that chassis, they’re not allowing you to return it except on highly restricted basis.

“The circulatory system our globalized economy depends on has collapsed.”

With the yards so full, carriers/terminals are being highly restrictive in where and when they will accept empties.

Also, containers are not fungible between carriers, so the truckers have to drop their empty off at the right terminal. This is causing empty containers to pile up. This one trucking partner alone has 450 containers sitting on chassis right now (as of 10/21) at his yards.

This is a trucking company with 6 yards that represents 153 owner-operator drivers, so he has almost 3 containers sitting on chassis at his yard for every driver on the team.

He can’t take the containers off the chassis because he’s not allowed by the city of Long Beach zoning code to store empty containers more than 2 high in his truck yard. If he violates this code they’ll shut down his yard altogether.

With the chassis all tied up storing empties that can’t be returned to the port, there are no chassis available to pick up containers at the port.

And with all the containers piling up in the terminal yard, the longshoremen can’t unload the ships. And so the queue grows longer, with now over 70 ships containing 500,000 containers are waiting offshore. This line is going to get longer, not shorter.

This is a negative feedback loop that is rapidly cycling out of control that if it continues unabated will destroy the global economy.

Alright how do we fix this, you ask? Simple. And we can do it fast now.

You should always choose the most capital-intensive part of the line to be your bottleneck. In a port that’s the ship to shore cranes. The cranes should never be unable to run because they’re waiting for another part of the operation to catch up.

The bottleneck right now is not the cranes. It’s yard space at the container terminals. And it’s empty chassis to come clear those containers out.

In operations when a bottleneck appears somewhere that you didn’t design for it to appear, you must OVERWHELM THE BOTTLENECK!

Here’s a simple plan that @POTUS and @GavinNewsom partnered with the private sector, labor, truckers, and everyone else in the chain must implement TODAY to overwhelm the bottleneck and create yard space at the ports so we can operate against.

1) Executive order effective immediately overriding the zoning rules in Long Beach and Los Angeles to allow truck yards to store empty containers up to six high instead of the current limit of 2. Make it temporary for ~120 days.

This will free up tens of thousands of chassis that right now are just storing containers on wheels. Those chassis can immediately be taken to the ports to haul away the containers.

2) Bring every container chassis owned by the national guard and the military anywhere in the US to the ports and loan them to the terminals for 180 days.

3) Create a new temporary container yard at a large (need 500+ acres) piece of government land adjacent to an inland railhead within 100 miles of the port complex.

4) Force the railroads to haul all containers to this new site, turn around and come back. No more 1500 mile train journeys to Dallas. We’re doing 100-mile shuttles, turning around, and doing it again. Truckers will go to this site to get containers instead of the port.

5) Bring in barges and small container ships and start hauling containers out of long beach to other smaller ports that aren’t backed up.

This is not a comprehensive list. Please add to it. We don’t need to do the best ideas. We need to do ALL the ideas.

We must OVERWHELM THE BOTTLENECK and get these ports working again. I can’t stress enough how bad it is for the world economy if the ports don’t work. Every company selling physical goods bought or sold internationally will fail.

The circulatory system our globalized economy depends on has collapsed. And thanks to the negative feedback loops involved, it’s getting worse not better every day that goes by.

I’d be happy to lead this effort for the federal or state government if asked. Leadership is the missing ingredient at this point.

Next post: Noted in Passing: 2 Comments on 2 Different Subjects

Previous post: LGBTQ — OR –Let’s Get Brandon To Quit