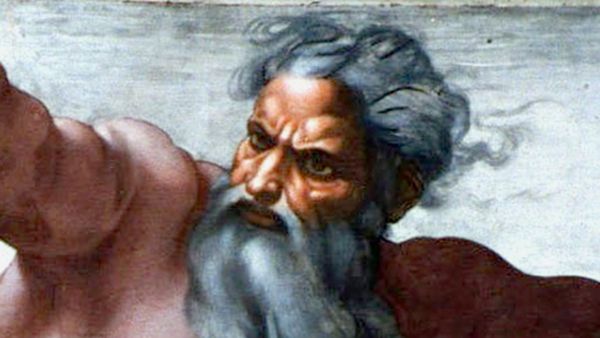 Out of the whirlwind:

Some people have been asking how, in a world they say is governed wholly by me, Stephen Paddock was able to shoot hundreds of people this week, killing dozens. They seem to think I was AWOL.
Some accused me of actual dereliction of duty, saying that yes, I was present, but simply didn’t bother to intervene. I saw everything that happened as it happened, they say. In fact, I knew what would happen even before it happened. When Paddock bought the first rifle out of forty-seven, I already knew what he would do with them.

And yet I did nothing but watch, uninterested.

This is far from the first time such accusations have been made against me. You sing in praise of me that I sit on the throne of heaven, yet you seem to call me to the dock more often than you approach me on the throne. I get indicted every day. I have known church people who accused me in their hearts of unfaithfulness to them because I didn’t fix the Powerball lottery so they’d win tens of millions of dollars. I have had high school seniors accuse me of uncaring dereliction when they didn’t get accepted to their first college choice. Or grown men when they get fired from their job or even when they don’t get a coveted promotion.

Let me put this bluntly: I operate on a different level than you do. I have a longer view of the horizon than you. I have been around a lot longer than you. So: what have I done to you? How exactly, have I wearied you? I would like an answer.

I don’t recall that you were around when I big-banged the universe into existence. Nor were you there to advise me when I set the earth on its course, set the limits of the sea and the moon in your sky. I gave the hawks and eagles their flight. I gave the lion his power and invented how nature renews and reproduces itself. The seasons come, the seasons go because that is the way I set it up. Where were you when I did that? Your world supports your life and the lives of innumerable creatures. Do you think I had nothing to do with that? I set up life itself. It is in me that you live and breathe and have your very being.

But you tell me that I do not know what I am doing.

Very well, let us reason together. Get a backbone and listen. You want to know why I did not intervene in Las Vegas. And my answer is: I did. I did intervene, countless times and in countless years…..

READ THE ENTIRE SERMON AT Sense of Events: God and Las Vegas