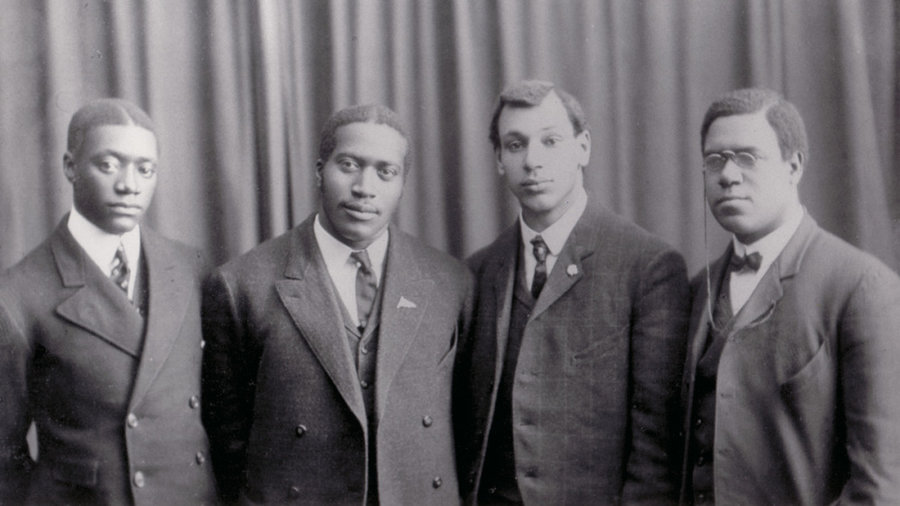 “Featured here is the first known recording of the song performed in December 1909 for Victor Studios by the Fisk University Jubilee Quartet (pictured above), a male foursome carrying on the legacy of the original Fisk Jubilee Singers of the 1870s.

“The unaccompanied recording of the quartet showcased the talent of four Fiskites: John Wesley Work II (1st tenor), James Andrew Myers (2nd tenor), Alfred Garfield King (1st bass), and Noah Ryder (2nd bass). By the time of the 1909 recording session, Fisk University had earned a reputation as being the “music conservatory” for aspiring black artists, primarily due to the immense fame of the original Fisk Jubilee Singers, who toured in the interest of the university from 1871-1878.

“The 1909 recording popularized the song hugely, helping it become one of the best known African American spirituals. Over the last century composers have arranged it for choral ensembles, concert soloists, jazz bands, concert bands, dance bands, and symphony orchestras, and it has been recorded countless times by popular musicians, from Paul Robeson to Johnny Cash, from Fats Waller to Eric Clapton. The song has also been adopted by England’s rugby fans who’ve sung its emotional strains at games for decades.”  – Via The Public Domain Review

Next post: “Last Salute Of The Army Of Northern Virginia”

Previous post: GRINGO DE MAYO!: A Counter-Celebration for May 7