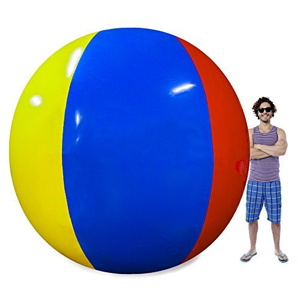 Dear Amazon,
Regarding our recently purchased The Beach Behemoth Giant Inflatable 12-Foot Pole-to-Pole Beach Ball.
We took this ball to the beach and after close to 2 hours to pump it up, we pushed it around for 10 fun-filled minutes. That was when the wind picked it up and sent it huddling down the beach at about 40 knots. It destroyed everything in its path. Children screamed in terror at the giant inflatable monster that crushed their sand castles. Grown men were knocked down trying to save their families. The faster we chased it, the faster it rolled. It was like it was mocking us. Eventually, we had to stop running after it because its path of injury and destruction was going to cost us a fortune in legal fees. Rumor has it that it can still be seen stalking innocent families in the Florida panhandle. We lost it in South Carolina, so there is something to be said about its durability.

Dear Amazon,
I bought this beach ball thinking it was going to be a good gag gift to take to the office on “Tiki Tuesday” (I work at staples headquarters) but i am now legally married to this 12-foot behemoth of a beach play toy and I don’t regret a thing.

Tiki Tuesdays at Staples HQ are why I get up in the morning. It’s more than just having a louou themed banquet at the beginning of the work week, it’s about team building, eating things my family doctor advised me to stay away from, staring Brook in her khaki pants, and most importantly reflecting on where life went wrong because I’m working at a failing business with fake flowers hanging on my gullet of a neck. Ask any child what they wanted to be when they grow up. I promise you none of them will tell you they want to work for Staples HQ.

Brook is a new intern at Staples and she is being prepped to be the new face of this failing franchise. Shes everything I ever wanted in a lady and more. Smart, a little overweight, and a girl.The first time I met Brook she had just finished off a whole hog that the company spent the vast majority of its budget on from its December earnings ($178.65). She proceeded to belch and spill the 3 two liters of off-brand cola onto the carpet and sent mountain mist directly into my corneas. Clean up on aisle love. I knew I had to impress her.

I found myself searching for the right outfit but realized we only wear those terrible red polos so my options were limited. I needed to find any other way to “carpe diem” and it seemed like tiki Tuesday would be just the way to do it. The 12-foot beach ball came in just 4 days. The party was only one day away. Time to get to puffin.

I opened the box and got sweaty because I’m overweight and have type 2 diabetes. It took me roughly 7 hours to blow up the ball in my studio apartment and I lost consciousness half a dozen times, but I knew it would be worth it to get Brooks attention. Once I finally finished I gazed upon god’s beautiful creation in sheer joy. It was just like any other beach ball toy but 12 times the size. You could not Imagine it if you tried. What I failed to recognize was that I needed to get it out of my studio and onto my Chevy Tahoe’s roof rack so I could take it to Staples HQ. I ended up deflating it 2/3’s of the way and blowing it back up in the parking lot. I then violently threw up multiple times and continued to doze in and out of consciousness for the next 3.5 hours. By the time I finished, it was time for work.

After finally getting to Staples HQ I realized that I needed to get the 12-foot beach toy through the revolving doors so I deflated it a second time but this time the sucker got away and flew around the Staples HQ parking lot like a party balloon so I lost all progress. After giving a homeless man my watch to get the ball back I was in the building on my way up the party.

Once I reached the 14th floor I heard the Staples HQ crew talking and setting up for this beloved event. I still could pull this off. I found an empty janitors closet and got to puffin. I puked a handful of times but it was only stomach bile so it really hurt and boogies came out and filled my stapes polo Brest pocket.

When I finally regained consciousness I looked up and noticed the ball was finally inflated. I was ready to steal Brooks’ heart. But there was a problem. I needed to deflate the ball in order to get it out of the janitor’s closet. Out of sheer anger I punched the 12-foot play toy with all my might and it bounced and hit a quart of Lemon Pledge that was on a mop bucket. The lemon pledge fell to the ground and the cap exploded sending pledge straight into my eyes. After 20 minutes of extreme pain my vision slowly came back to me and I looked up and knew what I was chasing all along was right in front of me the whole time.

Me and Beachball have been happily married for 9 months and plan on having children in the near future. The only reason I rated the love of my life 3/5 stars is because I wish it would have spilled mountain mist instead of lemon pledge. Far less painful.

Meanwhile, the summer fun continues on Cooper’s Hill in England where God spends some time each May being amused by the antics of his latest creation: The “Smart” Monkey. UPDATE: The Original Killer Beachball.

Next post: Let’s Review 82: Don’t Kid Yourself. They Really Do Want to Kill the President… And You… And Your Little Dog Too.