Strange Daze: “It was about the 30-minute mark that I turned to my wife and said, “This is a freakshow”.”

#Ukraine Mariupol. This pain is unbearable.

A man cries while sitting by the road in the middle of a completely ruined city pic.twitter.com/0sJPjI1aQg

It was about the 30-minute mark that I turned to my wife and said, “This is a freakshow”. Just then a surrey went by with some diverse passengers holding ferrets, confirming my freakshow diagnosis. Shortly thereafter two identical 50ish fat lady twins with dyed black hair of equal length and wearing the exact same clothes shuffled by, reconfirming my freakshow assessment. In addition to the waddling land whales, there were the purple hair brigade, nose, and lip piercing platoon, and of course the tattooed taskforce. Some hit a grand slam by being in all four categories. 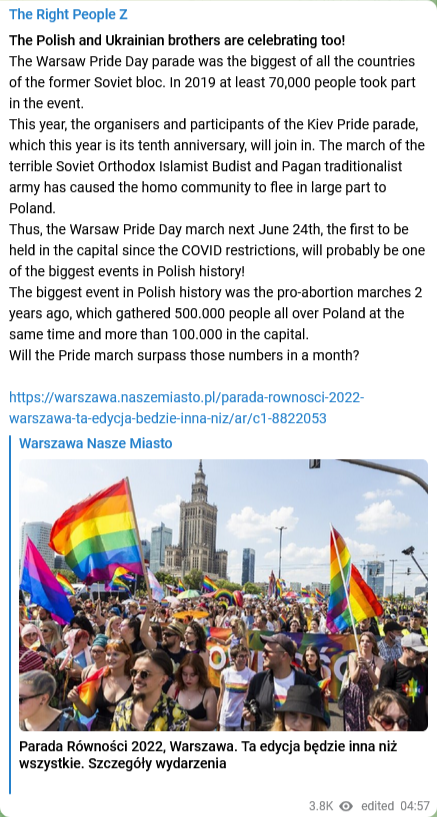 In Stunning Shift, WaPo Admits Catastrophic-Conditions, Collapsing-Morale Of Ukraine Front-Line Forces  For the first time The Washington Post is out with a surprisingly dire and negative assessment of how US-backed and equipped Ukrainian forces are actually fairing. Gone is the rosy idealizing lens through which each and every encounter with the Russians is typically portrayed. WaPo correspondent and author of the new report Sudarsan Raghavan underscores of the true situation that “Ukrainian leaders project an image of military invulnerability against Russia. But commanders offer a more realistic portrait of the war, where outgunned volunteers describe being abandoned by their military brass and facing certain death at the front.”

The Washington Post report belatedly admits the avalanche of propaganda based in a pro-Kiev, pro-West narrative from the outset: “Videos of assaults on Russian tanks or positions are posted daily on social media. Artists are creating patriotic posters, billboards and T-shirts. The postal service even released stamps commemorating the sinking of a Russian warship in the Black Sea.”

The report then pivots to the reality of an undertrained, poorly commanded and equipped, rag-tag force of mostly volunteers in the East who find themselves increasingly surrounded by the numerically superior Russian military which has penetrated almost the entire Donbas region. 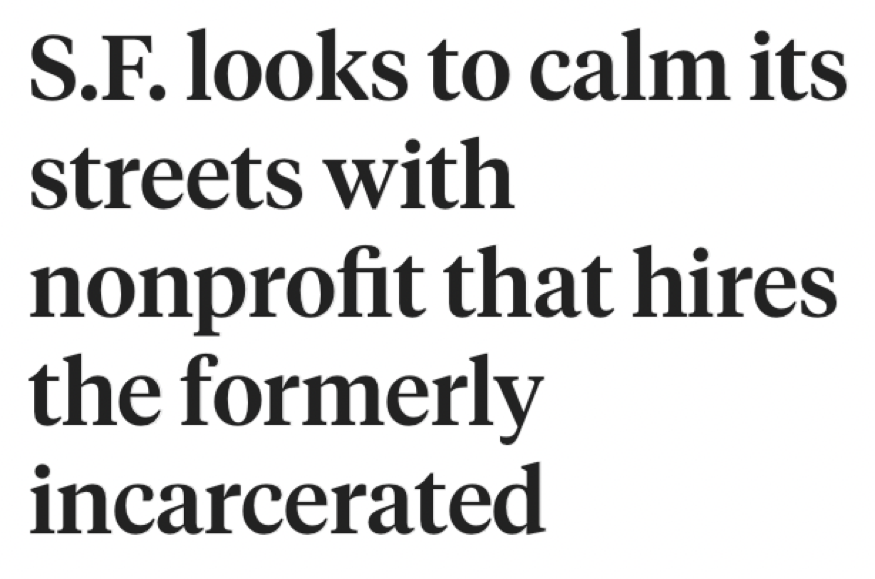 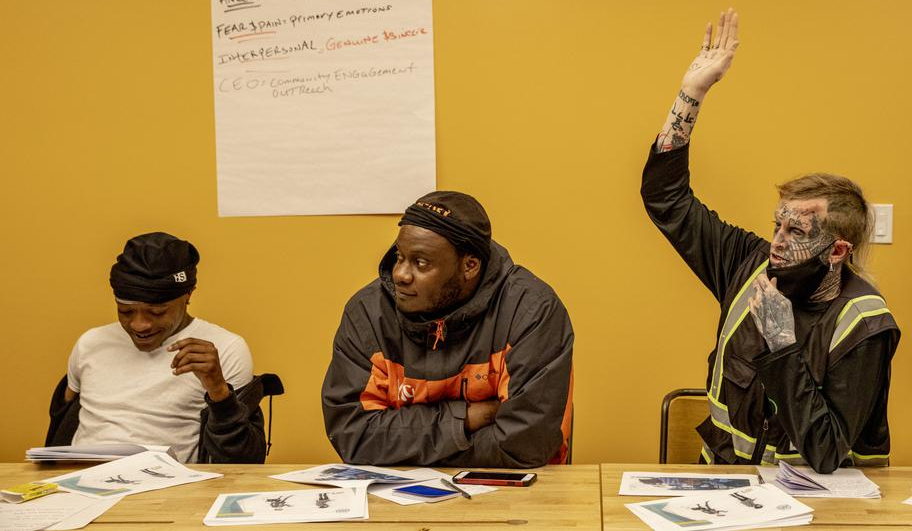 Spun Up About Race Bating and Gun Grabbing: “With that behind us I have one thing to say. Put armed guards in the schools!”

Law-Abiding West Virginian Woman With Concealed Firearm Stops A Mass Shooting |  Instead of waiting for the police to arrive, a woman with a concealed carry license in West Virginia acted fast to stop a crazed man with an AR-15-style rifle who was about to kill dozens of people at a graduation party. “Instead of running from the threat, she engaged with the threat and saved several lives last night,” Charleston Police Department Chief of Detectives Tony Hazelett told local news.

Folks, when the British tabloid press is admitting the front is collapsing you know the situation to this point has been nothing but narrative control.https://t.co/Ekqghxu7Sr

Authorities say the monkeypox outbreak has been linked to gay sex at raves in Europe    I’m sure monkeypox can infect all sorts of people who have wanton sex with random, infected strangers, so I’m not here to simply single out one type of sexual deviancy. But I’ll just leave you with this passage from Romans 1 before I get back to my coffee:

For this reason God gave them up to dishonorable passions. For their women exchanged natural relations for those that are contrary to nature; and the men likewise gave up natural relations with women and were consumed with passion for one another, men committing shameless acts with men and receiving in themselves the due penalty for their error. 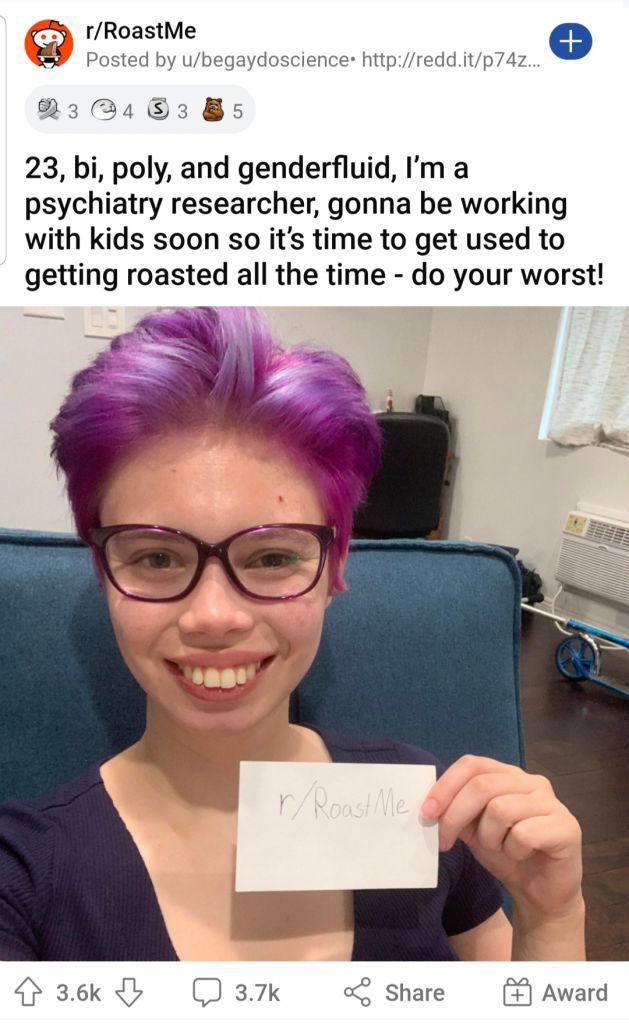 It was about the 30-minute mark that I turned to my wife and said, “This is a freakshow”.  I’m often left speechless when observing what people are doing to their bodies in the world today. When I was a kid the only people with tattoos were military guys or bikers, and those tattoos were a single symbolic tattoo on their upper arm. You never saw a tattoo on a woman in the 1960s, 70’s or 80’s. On this day it seemed like 50% of every man, woman and teen was adorned in hideous unrecognizable graphics from head to toe. My wife took this picture and the 60ish couple just happened to be walking by. It’s difficult to make out, but both of these seniors had full leg and arm tattoos. They were the classic representation of white trash. 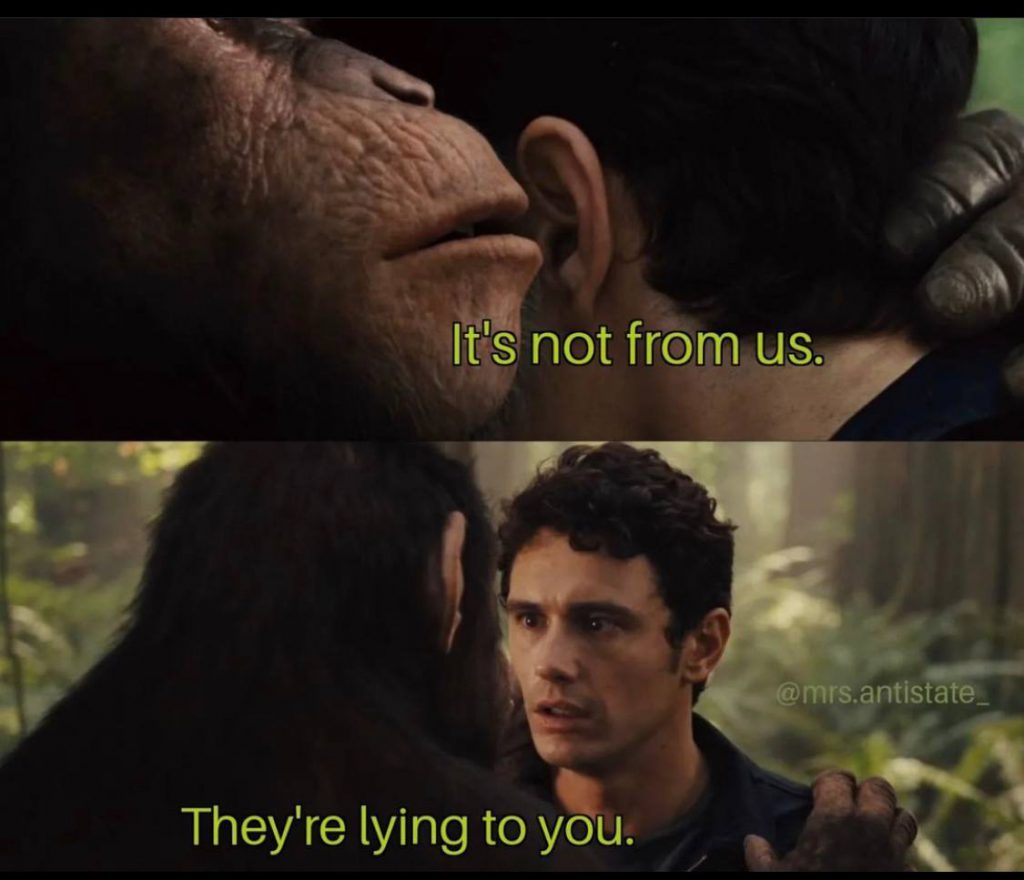 Monkeypox likely spread by sex at two raves in Europe, expert says  In an interview with The Associated Press, Dr. David Heymann, who formerly headed WHO’s emergencies department, said the leading theory to explain the spread of the disease was sexual transmission among gay and bisexual men at two raves held in Spain and Belgium. Monkeypox has not previously triggered widespread outbreaks beyond Africa, where it is endemic in animals.

Under a progressive information-state, it’s vitally important to erase the immediate past. Otherwise it would be deeply confusing to everyone in that state why my dad, his brothers, and all their friends used to take guns to school in their cars, without a single school shooting. These aren’t the bygone days of yore we’re talking about like it’s the Founding Fathers. It’s my *dad*. He’s still alive, I could call him up right now

These events aren’t caused by guns. They’re caused by something else. That we appear to have no interest in understanding. Stuff like this would have been far far more confusing to my parents, because it was so culturally alien despite them all owning guns all over the place

Therefore the cause is not the guns, but the culture: but the culture can’t possibly be examined and replaced. Just the guns. A culture that—if we’re just being empiricists here, scientists, the foundation of our society—apparently now regularly drives people to commit acts of mass violence that were just unthinkable when my parents were kids.

You would think there would be some curiosity about that. Entire fields of study should be dedicated to rigorous understanding of this.

Demographics, yes of course. But it also requires the cultural amnesia that it didn’t used to be this way. When you erase the collective memory of what’s normal, you get to reshape what is normal
Crazy, then, that despite this ability to induce cultural amnesia, in service of outlawing guns, gun rights have only gotten *stronger* over the last 30 years

You can catch monkeypox if you: Come in contact with the rash, rash fluid or scabs of a person who has monkeypox, especially if you are caring for the sick person, living with the sick person, or if you are the sexual partner of a sick person. . . Many of the cases in the current multi-country outbreak are in men who self-identify as gay, bisexual, or other men who have sex with men (gbMSM). These cases were diagnosed at sexual health clinics. The reason we are hearing more reports of cases of monkeypox in gbMSM communities may be because of positive health-seeking behaviour   in this community. [Editor’s Note: I just love the groveling sleight of hand involved in “health seeking behavior.” ] Monkeypox rashes can resemble some sexually transmitted diseases, including herpes and syphilis, which may explain why these cases are being picked up at sexual health clinics. 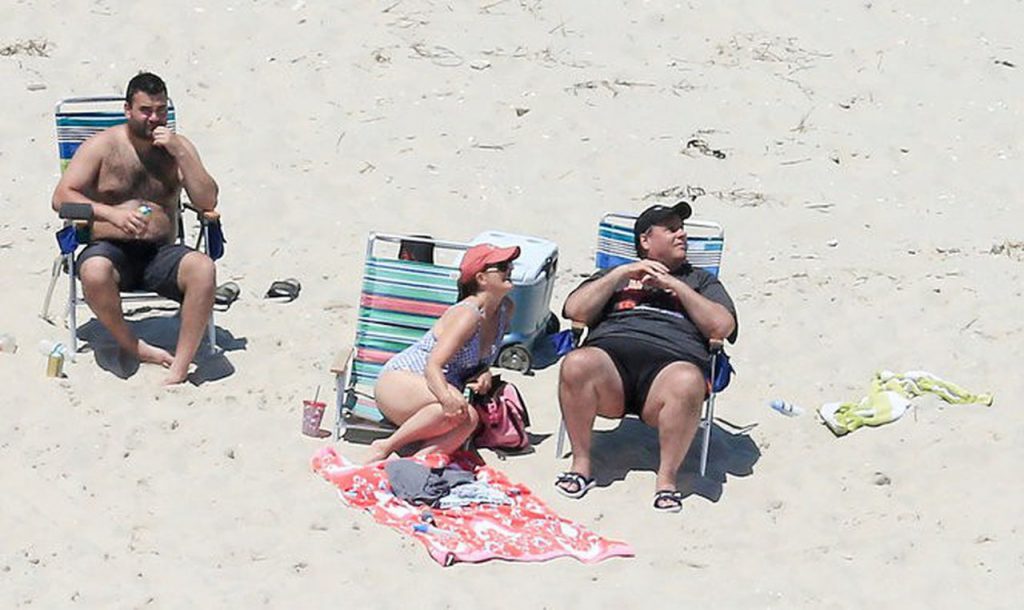 Chris Christie basks in his flab at the Jersey Shore

It was about the 30-minute mark that I turned to my wife and said, “This is a freakshow”.  I can’t conceptualize what makes people want to denigrate their own bodies in such a way. I think it is another example of our cultural decline. This social media ME culture, where everyone is taking selfies and posting on Facebook or Instagram, encourages the ignorant masses to try and stand out by doing things to their bodies in order to be noticeable and make an impression. 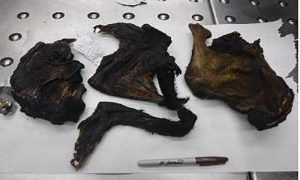 Minnesota CBP Stops the Deadly Introduction of Bushmeat in the U.S. | U.S. Customs and Border Protection PreviewSince late December, CBP Agriculture Specialists at MSP have observed U.S. citizens and lawful permanent residents returning from Liberia and declaring fish only on their written and verbal declarations. Even when passengers are asked directly about bushmeat, they declare “fish.” Inspections reveal more than fish. Most packages are wrapped in multiple layers of newspaper, plastic, foil, and tape. Chief Agriculture Specialist Lauren Lewis said, “the intermingling of fish and bushmeat in the same package is common.”

“Just last week our agriculture specialists stopped a passenger returning from Liberia,” said Augustine Moore, Area Port Director-Minnesota. When officers asked if he had any bushmeat, he said he had “parts of a monkey; turned out is was two primate arms and primate rib material.” 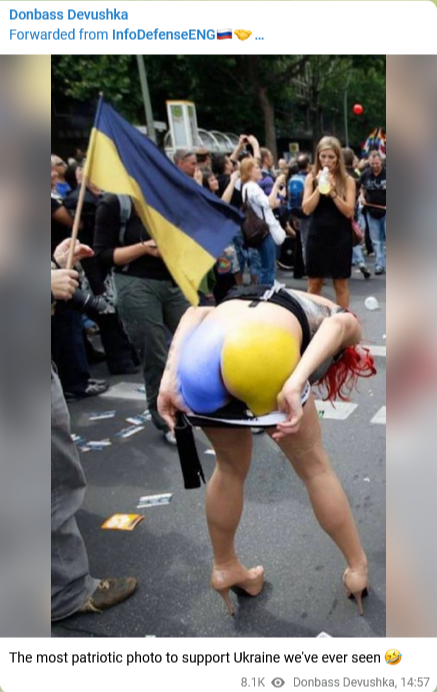 It was about the 30-minute mark that I turned to my wife and said, “This is a freakshow”. Our culture doesn’t honor people’s intellect or thoughts, but how they look and the shock factor of being more outrageous than everyone else. But, in reality, the tattooed masses are nothing but followers, doing whatever trend the crowd has latched onto at the moment. This explains their complete subservience to getting jabbed with an experimental Big Pharma concoction. They were told everyone else was getting it, so they just followed like good sheep.

The Democrats have opened the southern border and are allowing not only countless bogus asylum seekers to flood into the country but drugs and even people on the terrorist watch list, while at the same time they are fighting a proxy war against Russia. And anyone who opposes these insane policies is branded either a white supremacist or a Putin puppet. The latest revelation of their insane rule is their intention to set the national guard on parents angry about the indoctrination of their young ones with critical race theory and even worse, sexual grooming.

If America isn’t quite lost yet, it soon will be, but as long as its citizens can still legally own guns, the socialist dictatorship cannot be totally imposed. And if that means it will continue to have the fourth highest homicide rate in the world, that is a price many Americans from all backgrounds appear to be prepared to pay.

I have an irrational hatred of these fkn things pic.twitter.com/UkO5gBBjmq

Next post: Noted in Passing: A Man in Full