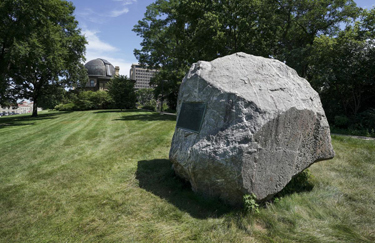 Never Yet Melted ｻ Latest Cancellation Victim: 70-ton BoulderIn collaboration with the Black Student Union at the school, University of Wisconsin-Madison leaders are discussing plans to remove a 70-ton boulder from campus grounds due to it once being called a racist name nearly a century ago.
The boulder had traveled to the region over 10,000 years ago, deposited by ancient pre-Cambrian bedrock drift from Canada, according to its plaque.

In 1925, workers pulled the rock out of the side of a hill on campus and named it “Chamberlin Rock” after Thomas Chrowder Chamberlin, a 19th century glaciologist and University of Wisconsin president. The rock was adorned with a plaque commemorating Chamberlin and placed at the university’s Washburn Observatory, where it remains today.

While Chamberlin Rock has been a campus fixture for 95 years, it recently came under fire due to once being described as a “n****rhead” in 1925 as was common geological practice at the time to describe large dark rocks, Madison.com reports.

Random articles on a random page of a random newspaper:
a tiny fraction of the population causes such outsized chaos pic.twitter.com/2e1lGpXYd8

This video is one of the most absolutely brutal things I’ve ever watched.

From the party that is constantly lecturing about “rhetoric,” I doubt they will have a word to say about this.pic.twitter.com/UcRtiuPMrV

Democrats know how unfit for public office this demented old man is. Still, they nominated him to lead the free world.

Looks like a job for a social worker…
pic.twitter.com/XM6rBimft9

You don’t need to be insulted. You couldn’t embarrass yourselves more than you already have. https://t.co/65ktDNdE7V

Kyle Rittenhouse and the militia obligation Section 246 of US Code Title 10, entitled, “Militia: composition and classes” reads: … (2) the unorganized militia, which consists of the members of the militia who are not members of the National Guard or the Naval Militia.” That is, all males of military age who are or intend to become citizens of the United States are under federal statute the “unorganized militia”, and have the duty of the militia to defend the Constitution of the United States against enemies foreign and domestic (as both naturalizing citizens and members of the armed forces swear to do). Kyle Rittenhouse is a 17-year-old male and thus a member of the unorganized militia under black-letter Federal law.

Turn Off, Tune Out And Drop Out |    These people are not geniuses who have carefully thought this through. They are caught up in nutty fads of their own creation, that sweep them along like flotsam. You see that with the response to the riots this summer. These idiot mayors, in places like Minneapolis and Portland, really thought they would be the heroes of these stories. They believed the agit-prop produced by the cult of social justice.Why are all anti-@realDonaldTrump stories based on anonymous sources? Wait, let me answer: Because they’re chicken shit Trump haters. Shame on the reporters who feed on that steady stream of bullshit.

Cuomo admits ban on NYC indoor restaurant dining may send people to NJ Megan Rickerson, 34, owner of the Someday Bar on Atlantic Avenue, said, “I can’t pay rent. I can’t pay my staff. I can last a couple months, maybe three. Outdoor dining is not a savior by any means,” she said. “Between drug use and homeless people harassing customers, customers don’t want to wait to dine outside. And there are cars flying by at 40 mph.”

New Yorkers Are Fleeing to the Suburbs: ‘The Demand Is Insane’ – On Long Island, six people made offers on a $499,000 house in Valley Stream without seeing it in person after it was shown on a Facebook Live video. In the Hudson Valley, a nearly three-acre property with a pool listed for $985,000 received four all-cash bids within a day of having 14 showings.

Don Surber: Highlights of the News  Also AP ran a story, “Meals on heels: San Francisco drag queens deliver amid virus.” More flattering publicity for LGBTQ. Where’s the story about Samaritan’s Purse and other Christian groups that feed the hungry amid the virus and long before there was a virus?

Black Lives Matter Rally Flyer States: ‘If It Burns, It Burns. This Is War’

SACRAMENTO, CA Governor Gavin Newsom has released new guidelines for California’s counties looking to reopen their businesses, saying that counties may only begin to lift their lockdowns once a cure for death itself has been found.

“Once we have beaten the last enemy, death itself, we can slowly begin to reopen over a 40-year period,” Newsom said at a press conference Tuesday. “Counties that report even one death for any reason will be forced to keep closures in place indefinitely, until we have answered the eternal question of how to reverse aging and ensure no one can die ever.”

USC Suspended a Communications Professor for Saying a Chinese Word That Sounds Like a Racial Slur – Greg Patton was describing the Chinese filler word “nega,” which earned him a temporary suspension.

Take Your Masks Off: That’s What THE Science Says – William M. Briggs If you’re a surgeon and risk getting blood shot up your nose, or snot shot down into the open body, wear a mask. If you’re a painter, working with insulation and the like, wear a mask. Wear a mask if you have an active illness you suspect might be coronadoom. That’s polite. Wear a mask if you are fat, old, diabetic, sick, or are otherwise susceptible, and are venturing to an area which might contain people who are actively sick with the doom.

‘You’re Not Allowed To Film’: The Fight for Control Over Who Reports From Portland –      “YOU’RE NOT ALLOWED TO FILM!” is a cry you hear incessantly at protests in Portland, Oregon, always shouted at close range to your face by after-dark demonstrators.

Next post: {Expanded, Updated and Bumped} Do the dance sensation that’s sweeping the nation.

Previous post: Enter antifa.com in your browser and see where it takes you…