Every separate day in the year is a gift presented to only one man—the happiest one; all other people use his day, to enjoy the sunshine or berate the rain, never knowing, however, to whom that day really belongs; and its fortunate owner is pleased and amused by their ignorance. A person cannot foreknow which day exactly will fall to his lot, what trifle he will remember forever: the ripple of reflected sunlight on a wall bordering water or the revolving fall of a maple leaf; and it often happens that he recognizes his day only in retrospection, long after he has plucked, and crumpled, and chucked under his desk the calendar leaf with the forgotten figure. – Vladimir Nabokov, from “The Potato Elf,” The Stories of Vladimir Nabokov (Vintage, 1997)

House of Eratosthenes sez:  The Internet, the streaming services, the potato chips…all this stuff sort of magically happens. I guess they think it’s little elves or something. Little coffee-milkshake-brewing, soda-carbonating, marijuana-growing elves. Unseen between-dimension creatures who haul away our garbage, open our grocery stores, stock the refrigerated cases with the milk we want to buy, and I suppose piloting all those cargo ships all over the world so the stuff keeps arriving at its required destination. Like it never occurs to them someone had to do some work to make it happen…which means someone had to leave a house. It takes a lot to keep this shelter-in-place lifestyle going.

We’re going to see a rush back to freedom. What’s going to happen is conservative states are going to start opening up and they’re going to start opening up soon. Then people in fascist nightmare states like California and New York are going to look over at Texas and North Dakota and the rest of free America that lies outside of the future People’s Republic and wonder why the hell they are still getting yelled at for going to the beach. Pretty soon it’ll be an avalanche as people demand to re-open. And then the stock market is going to soar and unemployment is going to come down and we’re going to put this nightmare behind us. And Trump will get re-elected, which they fear more than any virus. 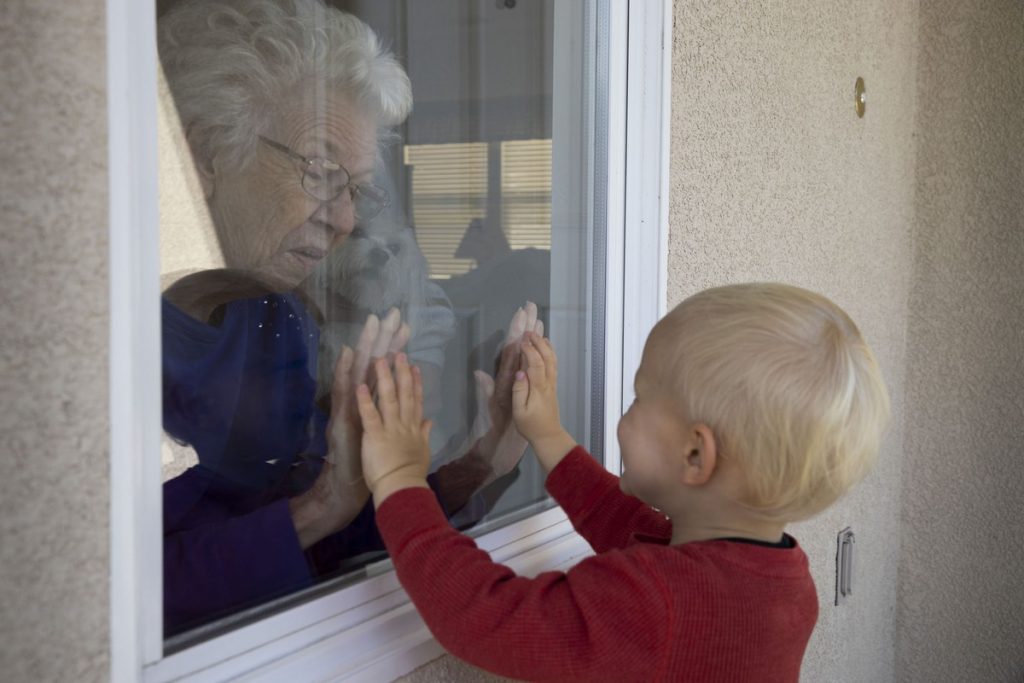 Mary-Lou McCullagh, 83, and her husband Bob, 84, greet Axel Stirton, 2, the little boy who lives across the street.

China is seeking to convert this global disaster into a geopolitical victory by presenting itself as a model for dealing with pandemics and savior, again engaging in information operations intended to sow discord among its foes, and seeking to expand its soft power. 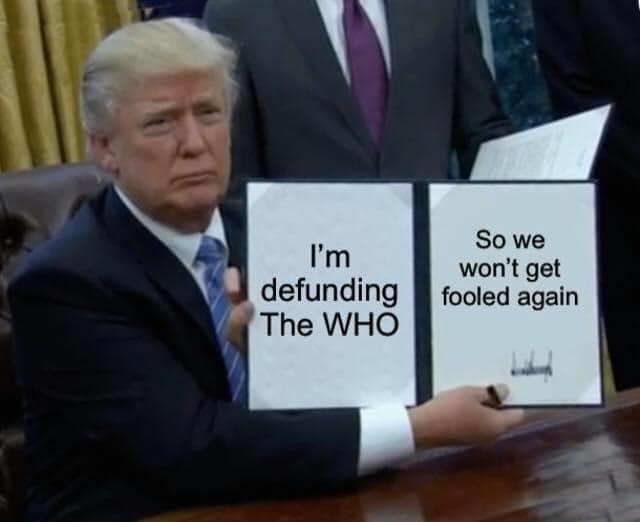 It’s right out of Sun Tzu: make yourself look weak when you’re strong and thus befuddle your enemy. Trump does this purposely. I’m convinced that when he sounds most blowhardy, that’s when he’s being the most deceptive. The Democrats think Trump is dumb. Which is fine with him. He is not hampered by a desire for their approval. He absolutely does not care what they think about him.

The COVID-19 Debacle Previews the Chinese Communist Party’s Imperial World Order CCP-Beijing caws and brays that COVID-19/the Wuhan virus wasn’t created in the Wuhan National Biosafety Laboratory, which, for the record, the CCP built so it could appear to compete with U.S. research facilities, and which is in the proximity of the Wuhan wet market. But check the terms. By created they mean a man-made biological warfare weapon.

For one half of a marriage, the garage is a place where things can be put in order to be kept out of the way. For the other half, the garage is the way. No harm done, no ill-will here. Just the necessary deviation in cognizance that arises from differently distributed usage. The janitor, after all, sees a garbage can very differently than I do.

Pelosi wipes her dripping nose with her bare, shivering hand and then wipes that hand all over the House floor podium used by all other members of Congress.

She wants to spend trillions of your money fighting China virus but can’t practice basic hygienepic.twitter.com/MZYdzsRi34

One thing global warming has taught the Ruling Caste: confer payola, positions, and prestige on the Scientific Caste and you can get whatever Science you want. So roll out scary pandemic predictions from bought and paid for Experts and Voilà! people will hand you their livelihoods and their freedom. In that Ruling Caste perfect world, we’d grant them permission to execute us if the Experts recommended it, docilely lining up for the firing squad or gas chamber. Who are we to argue with the Experts? Shutdown Could Kill More Americans Than COVID-19 No model or guesswork is required to foresee the deadly impact. Job losses cause extreme suffering. Every 1% hike in the unemployment rate will likely produce a 3.3% increase in drug overdose deaths and a 0.99% increase in suicides according to data provided by the National Bureau of Economic Research and the medical journal Lancet. These are facts based on experience, not models. If unemployment hits 32%, some 77,000 Americans are likely to die from suicide and drug overdoses as a result of layoffs. Scientists call these fatalities deaths of despair.

Nolte: Climate Denier Bill Gates Quietly Buys $43M Oceanfront Home If you judge Gates by his meaningless words, he is not a climate denier. But where it matters… In his actions, his behavior, his multi-million dollar investments, Gates is one of the biggest climate deniers in the history of climate denying. No one — not even if you’re worth billions — pisses away $43 million. What makes anyone think that our young people, educated to become social justice warriors, not engineers, have the brainpower to build anything. They are being educated in schools that value diversity more than outcomes, that refuse to respect the results of standardized tests, that have killed meritocracy and have generally dumbed them down. Why do you imagine that this cohort is capable of building anything, even if they had the desire.

Poor Tourists The middle seats of rows may be removed; cheap flights, which made it as cheap to cross half the world as to take a taxi to the airport, will be a thing of the past. Airports that had passing through them every year the equivalent of the population of a fairly large country will be much less crowded or frequented, and no future passenger will be much the unhappier for it. I have met no one who said, “I am really looking forward to going to the airport because it has such a lovely atmosphere and it is delightful to mix with such crowds of people.” 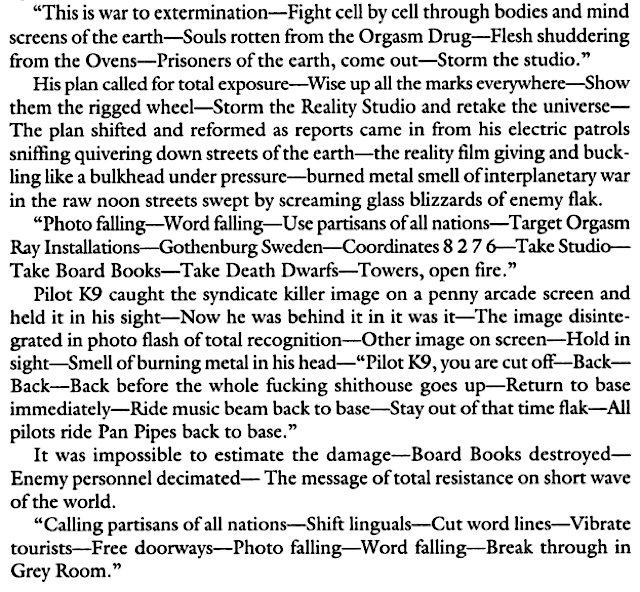 “As a general rule, the earlier you recognize someone is trying to kill you, the better off you’ll be.”

The Plague Of Heroes |  Here in Lagos, the local dictator has issued an edict requiring everyone to wear their underwear over their heads if they go outside. That’s a slight exaggeration, but not that much of one. The requirement to wear masks, something unavailable for months, means people are wearing all sorts of outlandish get-ups. More than a few times I have seen women with what looks like feminine napkins on their face. There have undoubtedly been men wearing briefs on their heads just to go outside At this stage, demanding that people wear masks is nothing more than a punitive measure to humiliate the public.

“In my study of communist societies, I came to the conclusion that the purpose of communist propaganda was not to persuade or convince, not to inform, but to humiliate; and therefore, the less it corresponded to reality the better. When people are forced to remain silent when they are being told the most obvious lies, or even worse when they are forced to repeat the lies themselves, they lose once and for all their sense of probity. To assent to obvious lies is…in some small way to become evil oneself. One’s standing to resist anything is thus eroded, and even destroyed. A society of emasculated liars is easy to control. I think if you examine political correctness, it has the same effect and is intended to.”

Next post: Survival Suppers: We Promise This is Delicious – Simple, Roasted Onions From 1808