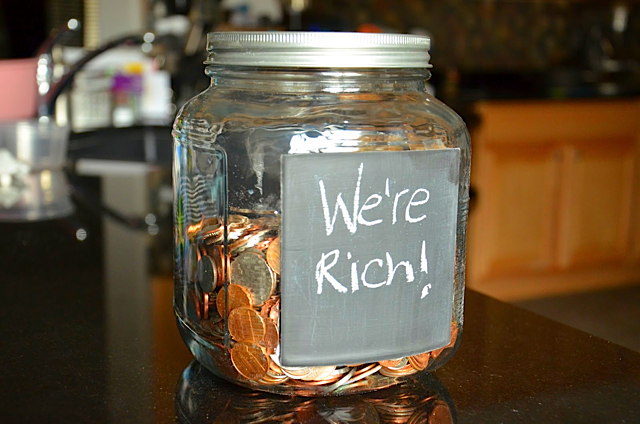 They are found in trays on the dresser, jars in the kitchen, bowls in the bedroom. They are the small bits of cash detritus, the left over fractions of a dollar, that collect in our pockets and purses on a daily basis, and often consigned to the change cups of America.

Most people have one. I have one. Mine is a white ovenproof ramekin and it slowly fills with pennies, dimes, nickels, and — mostly — quarters. Indeed quarters are what most change is made of in these days of prices set to end in .99 at work with various state and local sales taxes of 3 to 9 percent.

Every day I dump whatever is loose in my pockets into the ramekin. In the beginning it’s just a couple of quarters and a smear of pennies. Dimes and nickels are uncommon but not yet rare. In the fullness of time the ramekin fills up with an untold amount of money much like William Devane’s safe.

When a small mound of change forms at the top of the ramekin I know it is time for one of my favorite shopping trips: “FREE GROCERIES!” And to do that I bag up all my coins and head off to my favorite “FREE MONEY MACHINE!,” the big green Coinstar to get some.

After all, change is just the drippings from money already spent; the sawdust from your logs of liquidity. Few would be willing to separate the coins and pack them into tubes as was the case in the Ancient of Days. Fewer still maintain their own change counting machines. It’s just not worth it since the dollar became the new quarter sometime between 2008 and now.

Coinstar is the answer. For a mere 10.9% of your money, it will convert your change into a strip of paper which can be redeemed for groceries and real currency at the cash register. Coinstar is also a very entertaining store machine, one of the few that gives you back something for your effort. It’s a kind of reverse slot machine (with similar sound effects)in which you win every time, minus 10.9%. In addition, it shows its work on the screen. You tilt up the slide and let the coins shuffle into a satisfying series of clinks, clunks, and clacks, interrupted every so often with a clunk as the Coinstar spits out an item it cannot accept. In front of you, the screen shows the actual ascending numbers of pennies, nickels, dimes, quarters, half-dollars (rare), and silver dollars (hunted to extinction). Then you get your voucher and off you go to shop with… “FREE MONEY!”

Because I am easily entertained I love those trips. Yesterday I noted that my love for Coinstar was due to be consummated once again. I noticed that ”Lo, my change cup runneth over,” and poured all my change into a Ziplock bag. Its heft felt like around two pounds. My change cup was, obsessive-compulsively and blissfully, empty again.

I set off for the town Safeway and poured my change into the coin slide on the Coinstar. It went through its satisfying series of clunks, clinks, clanks, clacks, and counting and came up…. at the end of it all… with…

Yes, a round dollar amount completely at random. This is, for those like me who suffer from Obsessive-Compulsive disorders, equal to “the perfect pump.” (When, in filling the tank at the gas pump, you watch the rising total and snap-release the handle and get a round dollar amount. So satisfying!)

Armed with my free money voucher in the sum of …

When…. at long, long last…. it was my turn I handed my Coinstar voucher to the cashier. She pulled my “15 Items or Less” across her scanner. The total?

To my right, the change dispenser at the pay station spit out into its buff metal cup…. one single quarter. I picked it up, slipped it into my pocket, and took it home.

I tossed it into the white ramekin. It made a nice crisp clink as it hit the bottom of the empty change collector.

There it sits this morning, all alone with a small tuft of pocket lint, waiting for others in its mildly diverse family of money to join it.

And the great circle of life begins again. 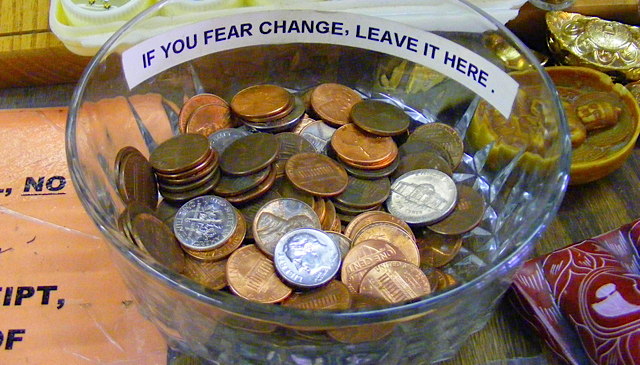 Next post: Job 38 4 Where wast thou when I laid the foundations of the earth? declare, if thou hast understanding.