Band In China: South Park Apologizes to China for Saying (Among Other Things) It’s a Gilded Concentration Camp with Winnie the Pooh Leading It

[ If Youtube tanks the episode over the day the full show is here; Band in China – Full Episode – Season 23 – Ep 02 | South Park Studios]

Then the apology after China banned “Band In China:” 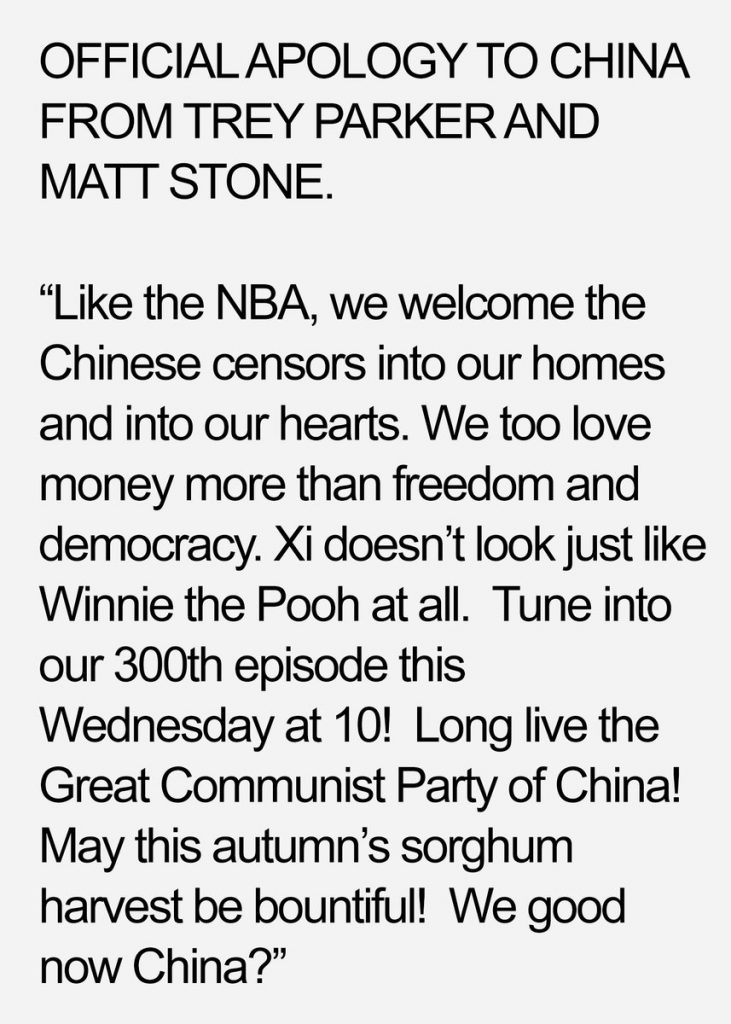 The apology echos, and not in a nice way, the NBA’s kissing of China’s ass as outlined here by Ted Cruz:

As a lifelong @HoustonRockets fan, I was proud to see @dmorey call out the Chinese Communist Party’s repressive treatment of protestors in Hong Kong.

Now, in pursuit of big $$, the @nba is shamefully retreating. https://t.co/7waMde5KrM

What was the offense against the great and powerful Oz of China?

Morey thought a good game but was quickley sent to NBA Gulag for his thought and re-educated into this cringing apology:

1/ I did not intend my tweet to cause any offense to Rockets fans and friends of mine in China. I was merely voicing one thought, based on one interpretation, of one complicated event. I have had a lot of opportunity since that tweet to hear and consider other perspectives.

I think this quote captures much of the worldview of Chinese communists:

Birds in a cage think flying is an illness. -Alejandro Jodorowsky

So given the plight of Hong Kong, and the massive abuses that have come to light over recent years, and the current appeasement by many corporations, China has reached the top of my list of social concerns. We in the West have been saying things like “never forget” with regards to genocide, ethnic cleansing, state sponsored racism, and fascism for as long as China has been a communist state. The economic entanglement with China and attempts by the West to peacefully guide China into a more democratic way of government make the situation very messy and difficult to act on.

Personally, I’ve decided that the least I can do is to speak out against them, and to be more careful with where my money goes.

These are the collectivist authoritarians, subject to all the maladaptive thinning and terrible consequences Jordan Peterson talks about. In some ways, they are worse than Germany’s Nazis.

Collusion, collaboration, and appeasement are the status quo.

Next post: “Man, you gotta go.” The Road Goes On Forever and the Party Never Ends