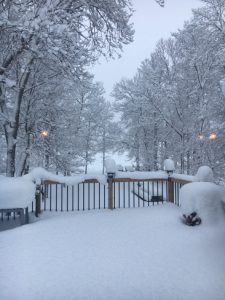 My earliest memories are fragments; old black and white snapshots with scalloped edges where there should be movies.  I remember my  father and his youngest brother throwing a football on the beach at La Jolla while I sat on the sand with a tin bucket as my mother held my baby brother in a towel. I remember putting a playing card into the spokes of my Schwinn to get a sound like an engine, a very feeble engine. And, as a child born in Los Angeles, I remember the first time I saw snowflakes.

I remember being in the back seat with my younger brother and falling asleep on the rough almost horsehair upholstery on the two days it must have taken to drive up the spine of old Highway 99. Other than that nothing remains in my memory of what must have been an early epic family expedition. Perhaps some scrim of pines blurring by as the day waned and the car climbed up the two-lane road that even then was known as the Skyway; then I drowsed.

I sat up and looked out into a landscape that held a small house by a small lake that was dusted white in all directions. Up the driveway from the small house, two small people were walking to the road. As I watched they became the people whose pictures were on the dresser at home. They were my grandparents. They came up to the car and I remember they looked into the window at my brother and myself wrapped in a couple of car blankets and waved at us. The door opened and my stern Dutch grandfather in his (yes) wooden shoes and my rolly-polly grandmother gathered us both up and carried us down the gravel driveway to my grandfather’s homemade house by his homemade lake with his homemade rowboat that always leaked and was never repaired.

Then I was given a cup of hot chocolate made even more memorable by a large marshmallow melting inside it. Then there was my grandmother’s apple cobbler made from the apples from their own small homemade orchard by their own small homemade lake. I took my hot chocolate and went outside on the porch on what must have been a cold winter evening. The porch rail had white snow on it that I remember touching and tasting. It was cold on my tongue and tasted of distilled water.  Everything around, the house, the apple orchard, the lake, was dusted, softened, with snow “falling softly and softly falling.” Behind me inside the homemade house, there was, in my memory, a shadow of a Christmas tree and my entire family. I’d been a baby and now a young boy who only knew Los Angeles and the sun and smog that were its trademarks in those years. Now I was somewhere in some mountains far to the north and I saw around me what I had only seen in books about Christmas. I saw snow.