A handsome smokey-colored brown bear standing on his hind legs, showing that he is aroused and watchful.

Bearing in his right paw the Shovel that digs to the truth beneath appearances; cuts the roots of useless attachments, and flings damp sand on the fires of greed and war;

His left paw in the mudra of Comradely Display–indicating that all creatures have the full right to live to their limits and that of deer, rabbits, chipmunks, snakes, dandelions, and lizards all grow in the realm of the Dharma;

Wearing the blue work overalls symbolic of slaves and laborers, the countless men oppressed by a civilization that claims to save but often destroys; 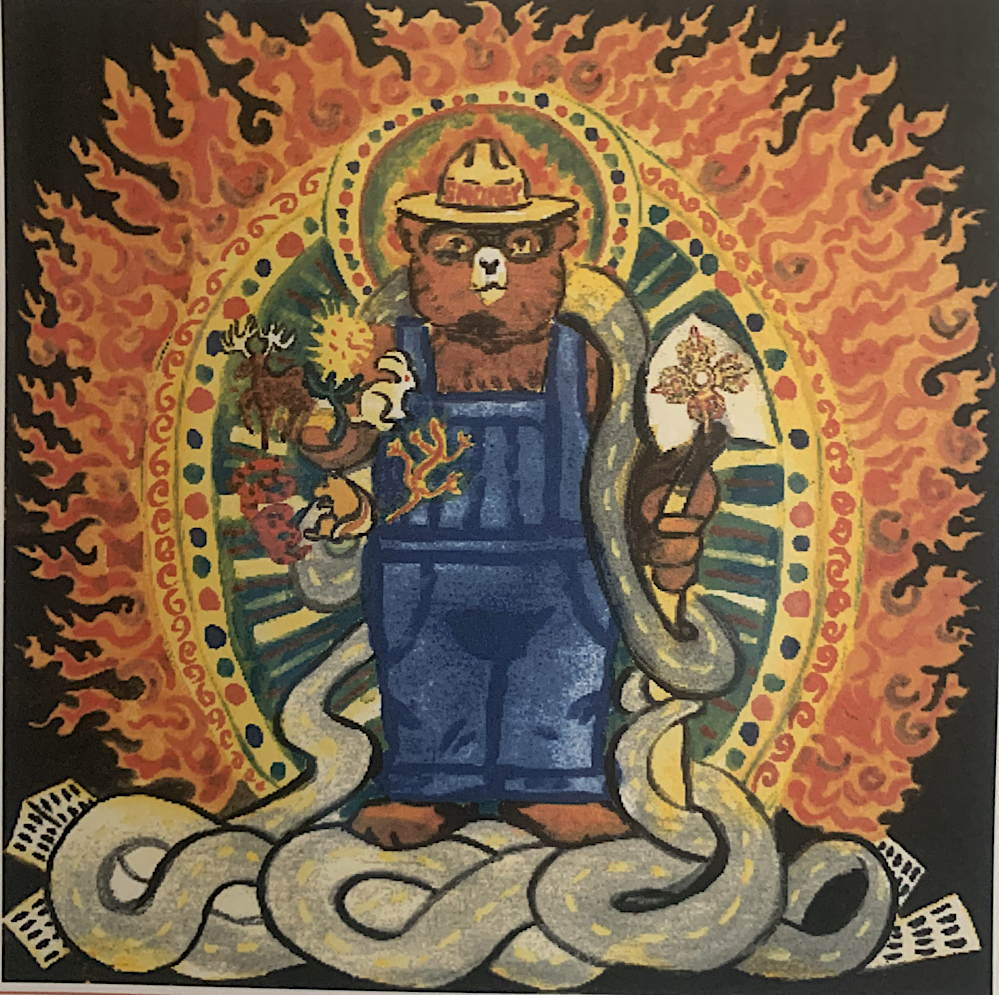 Wearing the broad-brimmed hat of the west, symbolic of the forces that guard the wilderness, which is the Natural State of the Dharma and the true path of man on Earth:

all true paths lead through mountains–

With a halo of smoke and flame behind, the forest fires of the kali-yuga, fires caused by the stupidity of those who think things can be gained and lost whereas in truth all is contained vast and free in the Blue Sky and Green Earth of One Mind;

Round-bellied to show his kind nature and that the great earth has food enough for everyone who loves her and trusts her;

Indicating the task: his followers, becoming free of cars, houses, canned foods, universities, and shoes, master the Three Mysteries of their own Body, Speech, and Mind; and fearlessly chop down the rotten trees and prune out the sick limbs of this country America and then burn the leftover trash.

HE WILL PUT THEM OUT.

And he will protect those who love the woods and rivers, Gods and animals, hobos and madmen, prisoners and sick people, musicians, playful women, and hopeful children:

And if anyone is threatened by advertising, air pollution, television, or the police, they should chant SMOKEY THE BEAR’S WAR SPELL:

And SMOKEY THE BEAR will surely appear to put the enemy out with his vajra-shovel.

Now those who recite this Sutra and then try to put it in practice will accumulate merit as countless as the sands of Arizona and Nevada.

Will help save the planet Earth from total oil slick.
Will enter the age of harmony of man and nature.
Will win the tender love and caresses of men, women, and beasts.
Will always have ripened blackberries to eat and a sunny spot under a pine tree to sit at.
AND IN THE END WILL WIN HIGHEST PERFECT ENLIGHTENMENT

…thus we have heard…

Next post: True But Forbidden 37: Red Zones in the Dark Continent– The 2 Most Important Graphs In the World