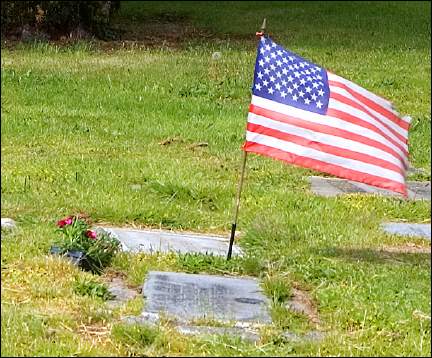 [Seattle, 2007] The cemetery at the top of Queen Anne in Seattle is busy this weekend. This even though a cemetery under all circumstances is seldom thought of as a busy place. We haven’t had busy cemeteries since 1945. Since then the long peace and its sleep were only briefly, for a few years every now and then, interrupted by a small war. The cemeteries fill up more slowly now than ever before. And our sleep, regardless of continuing alarms, deepens.

These days we resent, it seems, having them fill our cemeteries at all, clinging to our tiny lives with a passion that passes all understanding; clinging to our large liberty with the belief that all payments on such a loan will be interest-free and deferred for at least 100 years.

Still, the cemetery at the top of Queen Anne does tend to take on a calm, resigned bustle over Memorial Day weekend, as the decreasing number of families who have lost members to war come to decorate the graves of those we now so delicately refer to as “The Fallen.” They are not, of course, fallen in the sense that they will, suddenly and to our utter surprise, get up. That they will never do in this world. For they are not “The Fallen,” they are “The Dead.”

In the cemetery at the end of my street, of course, all the permanent residents are dead. But those who are among the war dead, or among those who served in a war, are easily found on this day by the small American flags their loved ones who still survive place and refresh. In this cemetery atop Queen Anne hill in Seattle, the small flags grow fewer and smaller with each passing year. It is not, of course, that the size of the sacrifice has been reduced. That remains the largest gift one free man may give to the country that sustained him. It is instead the regard of the country for whom the sacrifices were made that has gotten smaller, eroded by the self-love that the secular celebrate above all other values.

As you walk about the green lawn and weave among the markers, the slight breeze moves the small three-colored flags. Some are tattered and faded. Some are wound around the small gold sticks that hold them up. You straighten these out almost as an afterthought. Then the breeze unfurls them.

Here and there, people tend the grave of this or that loved one; weeding, washing, or otherwise making the gradually fading marks in the stone clear under the sky. Cars pull in and wind slow, careful on the curves, and park almost at random. An old woman emerges from one, a father and son from another, an entire family from yet another. They carry flowers in bunches or potted and, at times, gardening implements and a bucket for carrying away the weeds. It’s a quiet morning. Nobody is in a hurry to arrive and once arrived to leave.

When I lived in Villers-Cotteret , between Compaigne and Soissons, along the Western Front in France, the cemeteries were as quiet but on a scale difficult to imagine unless they were seen.

In the Battle of Soissons in July of 1918, 12,000 men (Americans and Germans) were killed in four days. Vast crops of white crosses sprouted from the fields their rows and columns fading into the distance as they marched back from the roadside like an army of the dead called to attention until the end of time. American cemeteries merged with French cemeteries that merged with German cemeteries; their only distinction being the flags that flew over what one took to be the center of the arrangement. I suppose one could find out the number of graves in these serried ranks. Somewhere they keep the count. Governments are especially good at counting. But it is enough to know they are beyond numbering by an individual; that the mind would cease before the final number was reached.

To have even a hundredth of those cemeteries in the United States now would be more than we, as a nation, could bear. It would not be so much the dead within it, but the truth that made it happen that would be unbearable. This is, of course, what we are as a nation fiddling about with on this Memorial Day. We count our war dead daily now, but we count mostly on the fingers of one hand, at times on two. Never in numbers now beyond our ability to imagine. This is not because we cannot die daily in large numbers in a war. September 11th proved to us that we still die in the thousands, but many among us cannot now hold that number as a reality, but only as a “tragic” exception that need not have happened and will — most likely — never happen again.

That, at least, is the mindset that I assume when I read how the “War on Terror” is but a bumper strip. In a way, that’s preferable to the mindset that now, in increasing numbers among us, prefers to take refuge in the unbalanced belief that 9/11 was actually something planned and executed by the American government. Why many of my fellow Americans prefer this “explanation” is something that I once felt was beyond comprehension. Now I see it is just another comfortable position taken up by those for whom the habits of automatic treason have become just another fashionable denigration of the country that has made their liberty to believe the worst of it not only possible but popular.

Like the graves in my local cemetery, these souls too bear within them a small flag, but that flag — unlike their souls — is white and, in its increasing rootedness in our body politic signals not sacrifice for the advancement of the American experiment, but the abject surrender of their lives to small spites and the tiny victories of lifestyle liberation.

In the cemetery at the end of my street, there are a few small flags. There are many more graves with no flag at all, but they are the ones that the few small flags made possible. Should the terrible forests of white crosses ever bloom across our landscape — as once they did during the Civil War — it will not be because we had too few of those small, three-colored flags, but because we became a nation with far too many white ones.