“Seven Things Conservatives Should Be Thankful For” – Kurt Schlichter 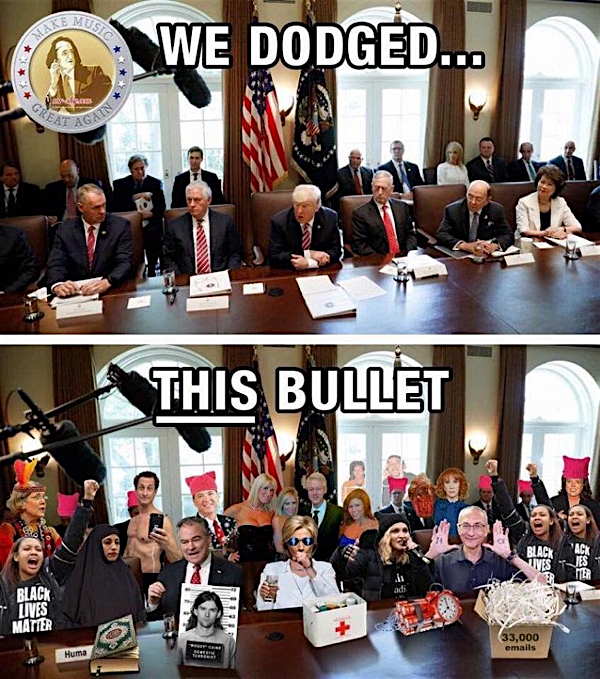 “No. 1: Be Thankful That Hillary Is Not Our President.

“Every day, it is a joy to awaken, unlike Hillary Clinton, without a hangover. Oh yes, and also to awaken knowing that Felonia von Pantsuit is not, and will never be, our president.

“Can you imagine if she were? She is as vindictive as she is stupid, which means instead of ripping apart the regulatory state, she and her nanny-gestapo army of obedient aspiring liberal fascists would be sliding their slimy tentacles into every aspect of our lives. Do you think the GOPe would even resist? The weenies in Congress would jump at the chance for WaPo glory by embracing “bipartisanship,” which means giving that corrupt harpy everything she wants in the name of “cooperation” and “reaching across the aisle.” Amnesty, tax hikes, gun grabs, speech bans – it would all be on the table. Freedom, not so much.

“But because of Donald Trump, with the support of normal Americans, winning the election against all odds, none of that is happening. Savor our victory. And give thanks for Hillary’s pain.

“Yes, we normals feel a certain tranquility knowing that, no matter what happens, at the end of the day, the liberal fascists can’t actually make us do anything we don’t want to do. As Mao noted, “Power grows from the barrel of a gun.” Mao got that right, if nothing else – the fact that the people of the United States retain the right to defend themselves from the kind of leftist oppression we’ve seen in Venezuela and other hellholes liberals swoon over during their short Potemkin village visits means that the only way they get their way is if they convince us to go along with it. They can’t make us do anything, and it gnaws at them.

“Nope, Kaden and Ashleigh the baristas are unlikely to gear up and start the hard work of taming us uppity normals. Their only weapon system is whining, and until we see a 62 grain tweet with a lead core and steel penetrator that flies over 900 feet per second, they aren’t imposing anything on us without our consent. Freedom is measured in calibers, and We the People retain our citizens’ veto over their serfdom-focused schemes no matter how much the gang from Team Progressive stamps its collective Birkenstocks.

“So be thankful for what we have, and never surrender. We’ll win.”

Previous post: The Japanese: Nuked Too Much or Not Enough? (Defrosting Tomorrow’s Frozen Turkey Edition)