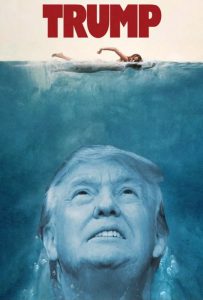 “Donald Trump comes cruising in. The reporters form themselves into tight groups. You know it’s kind of like ol’ squares in a battle or like being roped together at a Hillary press conference. And the idea is if the Donald goes after one reporter and then that reporter would start hollerin’ and screamin’ and sometimes the Donald would go away. Sometimes he wouldn’t go away. Sometimes the Donald, he looks right into you. Right into the reporter’s eyes. You know the thing about the Donald, he’s got… lifeless eyes, black eyes, like a doll’s eyes. When he comes at ya, doesn’t seem to be a real politician. Until he bites into ya with those scathing remarks and those black eyes roll over white. And then, ah then you hear that terrible high pitch complaining and the airways and Internet explode despite all the pounding and hollerin’ that the Donald isn’t a serious candidate. And that’s when the Donald comes in and rips ya to pieces. I’ll never go into a press pool again.” A Large Regular: Robert Shaw Describes a Donald Trump Press Conference

[NB: Lynch has been onto this since August 27 of 2015. On that date we can recall Trump Defends Hair, Attacks Media at South Carolina Rally Trump’s relationship with Hispanics again dominated media coverage of his campaign this week after his showdown with Univision’s Jorge Ramos in Iowa on Tuesday. Ramos was forced from Trump’s news conference while asking how the Republican would institute his immigration plan, which calls for deporting the estimated 11 million undocumented immigrants currently in the U.S. Trump maintained that Ramos was being disorderly for not waiting to be called on and the reporter was eventually allowed back to ask his question.]

Previous post: And he Oscar for Sh*thole Cities Goes to…. Los Angeles!