In this immortal screed Ace of Spades HQ types for me. 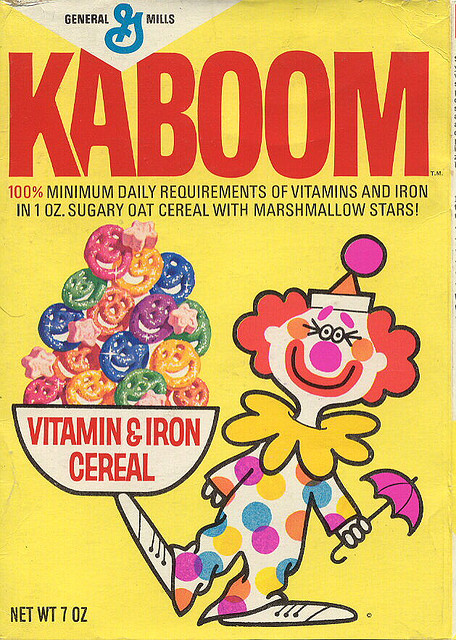 I mean, look at this box. Who is that box for? Who is the intended demographic here ?

No. Kaboom was for people — children, I mean — who had decided to give up on life. And it’s a sad thing for a six-year-old to have already thrown in the towel and said, “Ah well. The hopes and dreams of kindergarten are ultimately exposed as so much folly. Give me the Kaboom, Ma. I’m ready to settle.”

Because that’s all such a cereal is fit for, those who settle, who accept, those who lower their gaze in defeat and shame. This, this horrid Clown Cereal that looks like it’s some kind of weird generic brand but it’s actually marketed by General Mills. I suppose this was General Mills’ attempt to tap the “downscale demographic” in six-year-olds.

First of all, children hate clowns. All children. There’s a joke that everyone’s afraid of clowns. Well that’s not true. But everyone does hate them. Children most of all, because clowns get up in your grill with horrible jokes and diseased breath, eyes glassy with vodka and pedophilia.

So who’s this cereal for exactly? I suppose clowns might buy it for their victims and abductees, but that’s not a large market. Well, not that large, anyway. Couple hundred thousand units a year, tops.

When marketers found that most children described the Kaboom clown as “creepy,” they called a meeting, and then added a creepy bear and creepy hippo into the mix. Note that the hippo is not really your classic circus animal but this is in line with Kaboom’s “Who Cares?” design parameters.

And look at that box. Look at the colors. They’re horrible. And this was not a color scheme that was in vogue back in the day, either. No, among all the other breakfast cereals, Kaboom stood out as a cereal where the manufacturers simply were not even trying, because they wanted to appeal to children who had already decided that Track 3 in reading class was probably a bridge too far and not really worth the effort.

It’s like they gave a bunch of crayons and construction paper to illiterate hobos and said, “Do your best. Or your worst. We don’t care. We’re aiming for the dregs of second grade. Try to include a clown. Or don’t. It really won’t matter either way.”