Rant0matic 19: “The Bill of Rights Is What Matters Now” Jack Donovan Types for Me 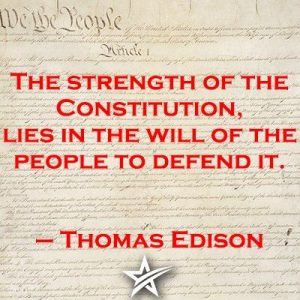 A contemporary American Nationalism can’t be about race or entitlement.

But it can and should be about freedom and individual sovereignty.

America’s founders created the Bill of Rights because they understood the danger of unchecked state power. The lived in a world where people competing religious groups spent generations murdering and trying to control each other. Actual witchhunts are part of early American history. The founders lived in a world where political imprisonment and execution were a real threat.

If you think a 21st Century state with access to drones and facial recognition technology doesn’t need to be checked and will by some miracle behave more benevolently than all of the human governments that have ever existed, you’re dangerously foolish.

The original Bill of Rights is the only thing preventing a completely Orwellian police state.

If you think you know anything about what goes on in Europe, you’re wrong, because they don’t have the same protected freedoms. Their “news” is already state-sanitized propaganda.

If you want to live in a country where people are arrested or disarmed at gunpoint for expressing an unpopular or unsanctioned viewpoint, under the auspices of “public safety” — then fuck you.

I don’t care where you stand on most issues – you benefit from the ability to be able to express your opinions and spread information that may not be mainstream. And that only works if you’re willing to protect the speech of people who disagree with you. If you think that you’ll be able to influence a state with unchecked power, or that you’ll always be on the right side of their sanctioned “truth,” then you’re wrong.

America is a messy, diverse, divided nation. We can agree to disagree on a lot of things. The only political cause I really care about now is The Bill of Rights. I think it’s something a legitimate majority can get behind. A cause that should matter to all races and religions. As long as the integrity of the Bill of Rights remains, everything else is still up for debate.

If you’re looking for a cause or a “front” to go to, I believe that this is the front of our time. This is not a war to be fought with guns — in fact, please fucking do not. (Like most gun owners, I’d love to be in a locked room with one of these sad boy shooters.)

Start with your world. Take a stand in your own home, with the people you know. And put your money where your mouth is.

If you’re going to draw a hard line in your own life, draw it here.

These things are non-negotiable.

Previous post: Upon St. Crispin’s Day “This story shall a good man teach his son.”