Rant0matic 17: Z-Man Types for Me on the NBA

“The NBA’s public relations disaster with China is one of those unanticipated events that is both amusing and clarifying. The amusing part is easy. The people who run the NBA are the worst sorts of people, so watching them get slapped around by the Chinese government brings lots of pleasure. Seeing the Chinese carry on like hysterical girls is a lot of fun too. The paper-thin skin of the ChiComs is a reminder that despite their tough talk, they live in mortal fear of the society over whom they rule.

“The clarifying part is the most important, as it reminds us that despite what our rulers tell us, countries still matter. China likes consuming product, but they like being Chinese more than they like watching the human flea circus that is the NBA. When the choice is between who they are and consuming product, the former is going to win. As John Derbyshire pointed out, the Chinese are focused on becoming a global power, not folding themselves into the bland nothingness of the global community.

“Of course, what makes this so clear is that the NBA is a billion-dollar enterprise that throws its weight around America in the culture wars. When George Zimmerman shot the hoodlum Trayvon Martin, the NBA players took the side of the hoodlum. The players would wear hoodie sweatshirts like the hoodlum. When the Ferguson cop shot Michael Brown, the players came out against the cop. 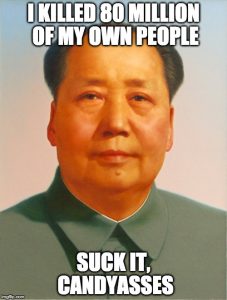 The league and its players drip with anti-white animus and no one in authority dares say anything about it.

In contrast, one unfortunate tweet and the NBA owners were crawling on their bellies, begging the ChiComs for mercy. Lebron James, the league’s biggest star, was seen volunteering to harvest organs from executed Chinese political prisoners. As Derbyshire pointed out, it was a display of raw power. The NBA will tell Donald Trump to take a hike, but they won’t dare get on the wrong side of the communists. The ChiComs have no fear of the human flea circus. They know who holds the power….

RTWT AT Proof Of Concept | The Z Blog

Previous post: What’s Going to Happen to the Tots?