Ram Dass: Another Ghost from My Youth Goin’ Down Slow Gone

“In the ’60s, I was an uncle for a movement, I was always showing people where they could go. I went east, and then there was a big movement east. Now the baby boomers are getting old — and I’m learning how to get old for them. That’s my role.” Spiritual guru Ram Dass dies 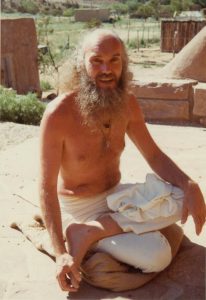 Crimson flames tied through my ears, rollin’ high and mighty traps
Pounced with fire on flaming roads using ideas as my maps
“We’ll meet on edges, soon, ” said I, proud ‘neath heated brow
Ah, but I was so much older then, I’m younger than that now

Somewhere in the ashes of my destroyed home there are the ashen flakes of a photograph I took of Ram Dass about 50 years back when we were working on the concept of taking “Be Here Now” photos.  The way that would work is that we’d confront each other with cameras at three feet and stare at each other until we felt the soul was fully present in the face and that the fake face we flash in photos was gone. Then we’d raise the camera and take one shot.  I took one of him and he took one of me and both are now gone into the smoke of the world. But Ram Dass and I seem to have lingered in the chambers of the sea
Ram Dass, to his credit,  has been Ram Dass and not Richard Alpert for over 50 years. Me? I am still here stuck in my old shriven self, tired of being smart and looking for a wisdom that never seems to arrive.

All the people we used to know
They’re an illusion to me now
Some are mathematicians
Some are carpenters’ wives
Don’t know how it all got started
I don’t know what they’re doin’ with their lives
But me, I’m still on the road
Headin’ for another joint
We always did feel the same
We just saw it from a different point of view
Tangled up in blue Ram Dass is ready to rock on right out of this world and wise enough to know it. Still, even now, he’s not yet wise enough or egoless enough to avoid being interviewed by a propaganda prick from the Throne of Lies known as The New York Times. Still, he doesn’t do badly against the punk.   Ram Dass Is Ready to Die – The New York Times

Well, along those lines, your belief is that the universe is unfolding perfectly. So how do we, as human beings, make sense of that perfection given the impending awful catastrophe of something like climate change?

Humans can have consciousness on two planes. For example, when you are a reporter at The Times, it’s a game. It’s a dance. How many people do you have to impress? It’s stuff like that. But the soul has in it the witness, and it witnesses our whole incarnation. The soul watches the game without judgment.

Am I playing the game the right way?

If you had an audience with President Trump, what advice would you give him that would be helpful to him in his job?

Identify with your soul.

That could take some work.

No? Am I being unfairly judgmental?

On my puja table  is Donald Trump. When I look at his picture, I say to him, “I know you from your karma, and I don’t know you for your soul.” And I am compassionate about that soul because he has heavy karma.

“Be here now” is: In each moment, go into the moment. Our minds take us back and forth in time. I teach a moment. And I teach that we identify with the ego. The ego is a mind warp, and most people don’t identify with their soul. They’re worried about excess meaning. The soul witnesses the ego and witnesses thoughts. “Be here now” gives people an opportunity to reidentify outside of their thinking-mind ego and into that thing that’s called the soul. It is the perspective from which we could live a life without being caught so much in fear. To reidentify there is to change your whole life. Next post: Something Wonderful: “Merry Christmas From Another Lost Place: This One Ancient and Cold “