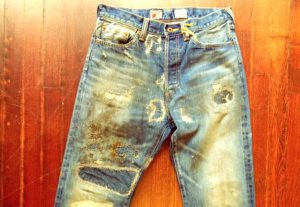 The PRPS NOIR Collection is not about black denim. Noir utilizes the best selvedge denim fabrics available anywhere in the world-with incredibly extensive washes and old school wear, tear & repair details that are authentic to genuine vintage jeans painstakingly collected over the years worn by real miners, mechanics, and laborers alike. Each jean is handmade and can take up to a week to produce. [Price: $300 — $500]– The Selvedge Yard

One of the small economies about living in New York City for years and relocating to the West Coast is to be had in clothing costs. If one of your jobs in New York was a men’s fashion editor for a magazine, you find that you don’t buy clothes so much as have them.

In any case, I dumped clothes by the cartload before I moved, and I still had far too many when I arrived. Since I don’t ski, the usefulness of items that would put Nanook of the North into a sweat during January in Greenland are pretty dubious. As a result, I’ve been pretty much out of the clothing shopping cycle for years and I find it, to say the least, refreshing.

In Seattle, if you hold some fleece jackets, a couple of hooded sweatshirts, a few work shirts and two pairs of jeans for “formal occasions,” you’re pretty much done. But “wear happens” and I’ve noted that my Levis have been getting — even for Levis — fairly grotty in the last couple of months. Yesterday, I decided they about to be redefined as “rags,” and I so set off to purchase my first new pair of jeans in at least six years.

Since I’m a hit-and-run shopper I did what any American male in search of jeans-to-go would do, I turned left into the parking lot of the first Gap I saw and sauntered inside confident of my mission. Unlike women of my acquaintance who practice “catch and release shopping” in order to increase their collection of designer shopping bags, I knew what I wanted. I also knew how much I was going to spend. This was in sharp contrast to many women who never really spend any money on clothes, but only “save” money on clothes. [ Me: “You look great in that new outfit with the shoes and the hat. How much did they cost?” Her: “Would you believe I saved over $800 on this? How great is that?” Me: “That’s really great.”]

I firmly believe that if you have to spend more than 15 minutes in a clothing store, you don’t need what you think you need. My list was short. I wanted one pair of five-pocket denim jeans, blue, crisp, and coming in at no more than $50. The Gap was the place for me.

Fool. Yes, fool. For if you want to find a pair of crisp, new blue jeans in trendy grunge Seattle, you’d better pack a lunch, because you are about to find yourself trapped inside an episode of “Shop Trek.”

Yes, it would seem that sometime in the last decade, the American people have become so fat and so happy and so inordinately lazy that they no longer want to put their own wear, sweat, and stress into their Levis. Nope, it seems that the entire country will only buy jeans that have already been worn into a shambles, reduced, as new, to the rags I already had at home.

You’ve got new jeans at the Gap that look like they’ve had non-union and unlucky sweatshop employees of Sri Lanka of all shapes and sizes stuffed into them and then dragged for miles along country roads. They’ve got jeans with the off-the-rack look as if they’ve been sandblasted at a construction site in Tijuana — after Happy Hour.

You’ve got jeans that look as if the person inside them was persuaded to run through a scene of “Dirty Dancing” with a belt-sander.

You’ve got jeans that seem to have been stolen out of a wedding reception in Afghanistan after a predator strike went terribly wrong.

And you’ve got jeans that I swear have the finish and light golden color stained deep into the blue that you could only get if you buried them in a Chicago feedlot and let several herds of cattle rain down on them for a month.

Pre-shredded, pre-torn, pre-raveled at the seams, pre-faded, pre-pissed upon and a dozen other industrial or inhuman processes all combined to give me a section of men’s jeans at the Gap that looked like the changing room right next to a mass grave. All displayed proudly and marked and priced as “New.”

I’d long been aware of a certain market on eBay, Eastern Europe, and Japan among the tragically hip for vintage worn Levis. I’d accepted that as one accepts the fact that there will always be a market real and facsimile shrunken heads. I’d been vaguely conscious of the “stone-washed” process in denim, but thought that was only popular among Suburban housewives of the expanding midriff. But I’d just not caught up with the fact that it was no longer necessary, or fashionable, to break-in your own Levis when you could have a process or a prisoner or a refugee do it for you.

It was once the case that when you bought a pair of Levis they were not only board stiff, they were two sizes large so you could “shrink to fit.” The other miracle about them was that they could turn any laundry within two blocks of your house blue for the first five washings. Wear? Wear happened — slowly, over years, like the mellowing of a fine Bordeaux. Long gone. Where are the Levis of yesteryear? In the Ginzo district in Tokyo selling for $1,110 a pair.

Where are the Levis and Gap jeans of next year? Probably on the ass of some hapless bastards in lock-down at a prison in either Arizona or Bangladesh. After all, if my web host can outsource his service calls to India, surely it is only a matter of time before our Levi pre-wearing is outsourced as well.

Did I buy any new jeans? Of course not. I came home and looked at the two half-rotten pair I own, frayed at the cuff, a hole in one knee, and stained from five years hard-riding. I slipped a pair on, chose a Hawaiian shirt that would be ashamed if it was a tie, slapped a fleece hoody over that, and took a turn in front of the mirror.

Ah, that Tropical-Balkan-Refugee-Gansta look. The very glass of fashion.

Next post: The Tiny Dot: What’s Amazing is that the Mass Obeys This Tiny Group of Control Freaks

Previous post: We should all be so lucky: “But bears it out even to the edge of doom.”