Pieta for the 41st Photograph

[NOTE: The Beslan school siege (also re­ferred to as the Beslan school hostage crisis or the Beslan massacre) was a ter­ror­ist at­tack that started on Sep­tem­ber 1, 2004, lasted three days, in­volved the im­pris­on­ment of more than 1,100 peo­ple as hostages (in­clud­ing 777 children) and ended with the deaths of 333 peo­ple, 186 of them children, as well as 31 of the attackers. It is con­sid­ered to be the dead­liest schoolshoot­ing in human history. Written September 4, 2004 — In another place and time.] 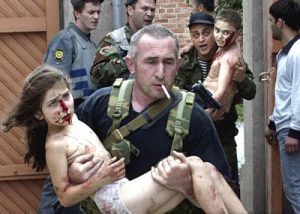 The soldier with the unlit cigarette carrying the little girl in filthy underwear with a long smear of blood across her nose and down her chin.

The boy that lies in his father’s lap covered with crusts of blood gazing upward at nothing, nothing at all except his own pain.

The child’s small hand with the dry pool of blood in the palm and the small gold crucifix lying in it.

I began to gather these images yesterday, I think. Or was it the day before? I’m not really sure. The cascade of outrages, the piling of atrocity on top of atrocity, has become so unremitting that it is sometimes difficult to know where one episode of Earth’s evil ends and another begins.

The waves keep coming and, because they are always to your back, they keep slamming you down into the hardpacked sand. You pick yourself up and spin around to face the next wave, but this sea of evil is cunning and the next wave will always come from behind your back no matter which direction you face. All you can know now is that there will be another one, and it will come at your back in the way the bullets came for the backs of the children in Russia.

Because I am both too old and too distant to either pick up a weapon to defend or offer help and comfort to the wounded or the dying, I am forced back on silly, futile, small gestures such as gathering images of the atrocities. In this I disgust myself and, like those who did not stand with Henry V on St. Crispin’s Day, hold my manhood cheap.

I thought that, perhaps, I could gather enough of them and arrange a kind of gallery as a testament, my own small memorial, to the children who were shot in the back or otherwise slaughtered by the diseased “militants” who thought nothing of these lives taken for their vile cause and their vile god. Somehow I would, I imagined, at least bear my own small witness among the millions of others doing the same around the world tonight.

And so I collected the images. I selected ones that showed the fascist smirk that always rises dark above any slaughter of innocents. I selected ones that revealed the courage of those who would try to rescue them. I found and saved some that revealed the chaos and sharp edge of the moment when all that a child may have in front of him is ripped out of him. I saved 10, saved 20, saved 40, and then came to the 41st photograph and stopped.

I stopped because in that one image, grainy, indistinct and from the far side of the world in a situation I could not imagine, I saw the one thing I was not expecting to see at all.

No, that’s not it. It was not what I saw but what I recognized.

What I recognized was something that I could not see in the picture, but a recognition that came to me through the picture. I knew it immediately and at such a deep level that my first reaction was to look away, to go on to the next picture no matter what it was, to determine to never look at the 41st picture again.

But of course, I did. I did because I had no choice. I had no choice because within this one picture I could see two separate episodes of my own life somehow together in one image that depicted an outcome that terrified me to the core of my being. 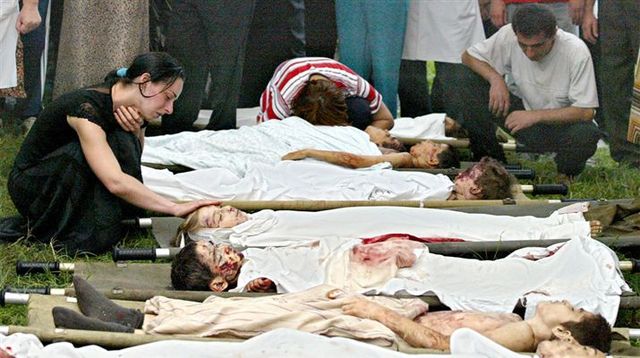 She kneels among the dead children. She has long black hair pulled back and dresses in a loose black dress as she kneels at the head of her dead boy. She reaches out to touch, or perhaps arrange the hair, of her dead child. Her dark hair is parted in the middle and her arm seems to also be downed with dark hair. Her eyebrows too are dark and her skin olive.

If I were to see this woman in another context, in a different and less death-dominated photograph, at this focus and at this distance, I would think, for at least a long moment, that I was looking at my first wife.

She had this same build, this same coloring, the predilection for black clothing, and even an echo of the features since her ancestors came to America from the Balkans. She too would pull her hair back so. And she had, as I recall, the same ability to make a gesture that was at once strong and yet gentle when reaching out to touch our daughter when she was as young as the small dead boy that this woman caresses.

The life I had with my first wife was all long ago, and now I live far away in time, space, and spirit from that woman as well as from that daughter. Now my life’s setting is a small town at the top of the Great Central Valley of California.

Before, to the south along the California coast, I had — for a brief time — a life with a wife as different from my first wife as the sun is from the moon. And someone else as well.

In that life, there was, to my continuing delight, a child. He was a bright and funny and breathtakingly striking ten-year-old boy so topped off with life and joy that he could stop your heart.  My step-son of that era was fond of Nintendo, not at all fond of girls, keen for a swordfight about every ten minutes of his waking life, and both depressed and elated at the advent of the 5th grade at the opening of his school next week. If I could show you a picture of him you’d agree that he’s a very promising young man.

And I can show you a picture of him.

He’s up there, just above, my first wife’s hand is touching him. Look carefully. You’ll see him and her both. Together in one instant, in one impossible image.

If you are a parent, you know as all parents know, the single darkest and most secret fear of all. You know the fear I mean. Yes, that one. The one we never mention. The fear that it is forbidden to speak of. The one we don’t speak of … ever. The one that we push out of our thoughts before it even finishes forming. It is the fear you see there in that photograph. We fear the photograph that shows you looking down at your murdered child.

That’s what I saw in the photograph. I saw a wife and a son — not mine, I knew, but mine just the same — frozen forever in an instant that I prayed would never come to me, that would remain just what it was, a photograph of a woman and a child I recognized but did not know.

In the week after seeing that photograph I’d often put my arms around my wife as we both looked out the kitchen window. From our small window, you could see across the green and brindle hills down to the ocean where the slow Pacific swells roll onto Main Beach where a volleyball game is always on the schedule and the seagulls and surfers share the waves.

“Every single day,” I said to her once, ” I thank God above that we are all here, in this good place, close to each other and still kept safe from things like those going on in Russia.”

At that time and in that life during the week my stepson would walk up the hill and take the bus to his first day of school. Seats would be assigned. He’d be given books and lists of supplies he must have. Nothing unusual would happen.

In the afternoon, he would come home. My wife and I would have dinner with him, he’d do his homework and go to bed.

And the years will flow by and he’ll go from strength to strength, from one bright moment to the next. His mother and I will watch him move ever upward into life as he gradually grows away from us and into his own life. This is how it was meant to be and how it will be. He will never be found in a photograph like the one I saw today. There’s no place for him in the 41st photograph, the one I couldn’t look at but saw just the same.

I am willing to do anything, anything at all, no matter what it may be, to keep him out of that photograph. That’s my answer to what I saw.

Previous post: [Bumped and Updated] Noted in Passing: A zombie bolted together by bullshit, booze, and botox.