PEWSLAG: The 7 Deadly Sins of Progressivism 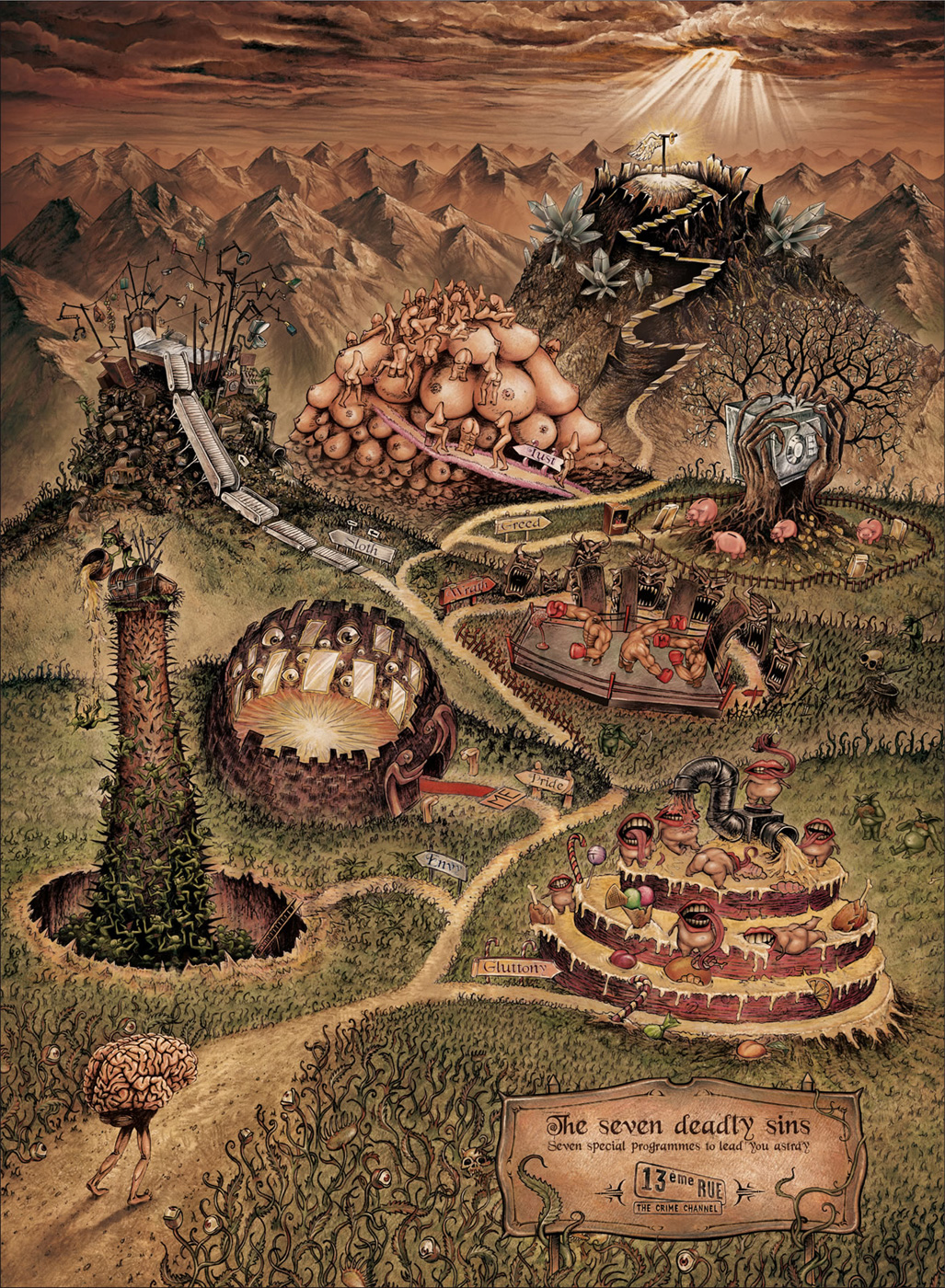 considered as ‘The 7 Deadly Sins,” but rather as the PPAF,

The Progressive Platform for America’s Future.”

“We are all lying in the gutter, but some of us are looking at the stars.” — Oscar Wilde

The progressive left (aka “Democrats”) has cast off all pretense of “progress” and reverted to a rag-tag slop bucket brimming over with Americans that hate children, success, happiness, liberty, and life itself. All these local “progressive heroes” will sooner or later get their close-up in the Fake News. Their faces and their ever-extending list of physical and mental diseases will unfailingly reveal the state of souls that have committed to personal and social devolution. These insects have bagged the seven deadly sins with the zeal of pedophiles in a playground. Theirs is the socialist Utopian view of life fueled with poppers and propaganda.

Those who have the tragic view of life accept that all humans are flawed. We all, to a greater or lesser extent, have touched on all of the 7 deadly sins. It is in our nature. But those with the tragic view at least struggle against this and strive to leave the world brighter and better than when we came into it, not more depraved and darker.

I see this split and this struggle in myself and hold myself more guilty of the 7 sins than is perhaps strictly true but when you put yourself on trial the verdict is always “guilty.” At the same time, I think I struggle in my small way to overcome these tendencies in myself and if I do not succeed, I still struggle.

What I do not do is revel in these mortal sins and constantly seek to live out the more extreme expressions of the same. That seeking can be seen in almost every progressive position and policy of the last several decades. From the celebration of abortion and treason to the exaltation of perversion and penury, it seems that every step taken by the progressive strain of American politics over the last few decades has been to sink deeper into the pit and to cavort in the reeking mire.

For most Americans, the 7 deadly sins are things we struggle against. For progressives, the 7 sins have become the touchstones of their plans and policies. So extreme has their dedication to degradation become that they have become proud of their achievements; from the slaughter of the unborn to normalizing the perverted to the feckless squandering of the local, state, and federal purse. Now their goal seems to be to pull the rest of us down into the cesspit where they wallow. Most Americans, when the choice is stark and immediate, decline to join them in the muck.   It isn’t an accident that a popular cultural meme this season is that of Zombies, the walking dead who seek to feast off and then convert the living to their living death.

At one point the classical American liberalism might have avoided this cultural and ideological degradation, but that was before ProgrressiveDemocrats left shame behind. Then it was full speed ahead. After all, once you’ve expunged shame from your conscious mind, parading Pride is what is left, even if it is unclear what you are proud of.

Pride (gay or straight)  is the first and most deadly sin. It’s the one that makes all the others possible. When the self and it’s immediate needs have become the individual’s brave new god, humility is impossible. Humility is, well, so human that the brave new gods of the Left cannot abide it. Instead, they must worship Ego Uber Alles. Pride is always at the head of their lemmings’ parade over the cliffs of nihilism into the waters of oblivion.

Long ago, there was a mnemonic for the seven deadly sins, PEWSLAG. In order, it meant Pride, Envy, Wrath, Sloth, Lust, Avarice, and Gluttony.  So common have the elements of PEWSLAG become in our time that they can no longer be considered as ‘The 7 Deadly Sins,” but rather as the PPAF, The Progressive Platform for America’s Future.

We’ve seen how societies based on The Triumph of the Will sweep across the world in the last century. These Self and Will centered social experiments all seem to have the worship of a single man at their center and the word “Socialist” in their name. Their core concept at the apex of their terrible arc is a National or Group Pride in a single individual as an excuse for the most horrible crimes committed on citizens and other innocents. The words “Nazi” and “Communist” both slide nicely into the old slogan, “Say it loud / I ______ and I’m proud.” Wisdom tells us what comes after pride, but wisdom is not a progressive value.

Progressive ENVY: This is an ancient organizing tool that uses those with less than everything as tools against those who have, well, more. It doesn’t matter if “more” is a second goat or an extra billion dollars. Thou shalt covet is the commandment here. Once you can convince a person to envy another there is no limit to what they want to take since what they want is not a goat or a billion dollars, but simply and eternally “more.” In the final analysis, those who at some point refuse to give “more” will be required to give all, including life itself. Envy always ends in guns.

Progressive WRATH: All those who point out, even in the slightest way, that the Progressive plan for Utopian improvement never seems to arrive at an endpoint but is always seeking “more,” are sure to feel increasing amounts of Wrath directed against them. It begins in a mild reproach as the doubter is made to feel the chill from his or her closest associates, but it quickly escalates to anger if the doubter does not immediately lie down and become submissive. For those that stand clearly outside the Progressive circle of approved behavior, wrath against them is constant and unremitting and ever-growing in its intensity.

Progressive SLOTH: One of the pleasures of being a Progressive is the one never has to actually produce anything of use in the form of innovation and invention. Progressives need only put in place things that impede innovation and invention in the form of excessive laws and continuing and complex regulations and false customs. It is remarkable in this century that one can spend a lifetime making these impediments to prosperity in the media, in academic life, in unions, and in a bureaucratic career, and only rise from reward to greater reward by making those and other careers safer for slackers and layabouts.

Progressive LUST: As the progressives institutionalize and subsidize sloth, whole oceans of time open for the non-abled and non-thinking and non-feeling in the mass of the intentionally under-educated in the nation. What better way to spend the brief time between the progressive-worshiped states of unbeing than in the constant pursuit of the sating of the senses? For although there is a puritan stain that oozes from all Progressive alphas, the alphas have found that the best way to control, to placate, the betas is to let them live lives devoted to lust. There are endless fully-supported programs that enable sex without any chance of pregnancy and, should avoiding pregnancy prove to be beyond the mental capabilities of the betas, there are subsidized programs for terminating any inconveniences. Should the inconveniences seem to be convenient, there are programs to support and warehouse them. Should the lusts of the body lead to disease, there is no end of programs to cure or at least palliate them should they be resistant to a cure. In all cases, everything is done to enable and promote lust as the booby prize for the betas. The more rubble in the masses, the less trouble for the elites.

Progressive AVARICE: The old joke of the two line IRS form that reads,

seems less and less amusing as it becomes more and more clear that Progressivism is merely the stalking horse for the complete control of private property and assets of the middle class.

Progressivism in the United States has seen the truth of the Thatcher observation that “The trouble with socialism is that sooner or later you run out of other people’s money.” The solution, driven by the greed of the political class, is simply to get their hands on all the money. Once that is achieved, the pie can be doled out from the private-jet sky. The size of your slice? Well, as we know only too well, the Progressive plan is “From each according to their ability. To each according to their need.”

Progressive GLUTTONY: A funny thing happened to the political animals of the sixties as they wormed their Progressive way into the national establishment in their dotage. These radical retreads discovered they liked to eat well and, at times, strangely. Hence we have the endless passions of the Progressive foodies for organic, for local, for “sustainable,” for ethnic, for vegan, for raw, for everything that can be eaten on the face of the earth combined with a catechism for the masses of the fast cheap food that is “bad” for them. It’s no accident that the biggest fetish for the Baby-Boomers that comprise the mass of the Progressive alphas is a food fetish. They like to eat… everything in sight. Unborn lamb today. Your unborn children tomorrow. Start with the stem cells and move up from there.

The progressives are gluttons for everything and they will continue to eat everything until they are stopped. Until then, their platform and program, their PPAF, is summed up in the simple mnemonic, PEWSLAG, where Pride is the beginning and Gluttony the end of their endeavors. And the fruits of the Progressives’ Gluttony will always be that which is always emitted the morning after a long night of unrestrained feasting on the living by the zombies among us.

Previous post: It’s a Quarter to 2020. Do You Know Where You Stand?