Page for the Turn of Last Year 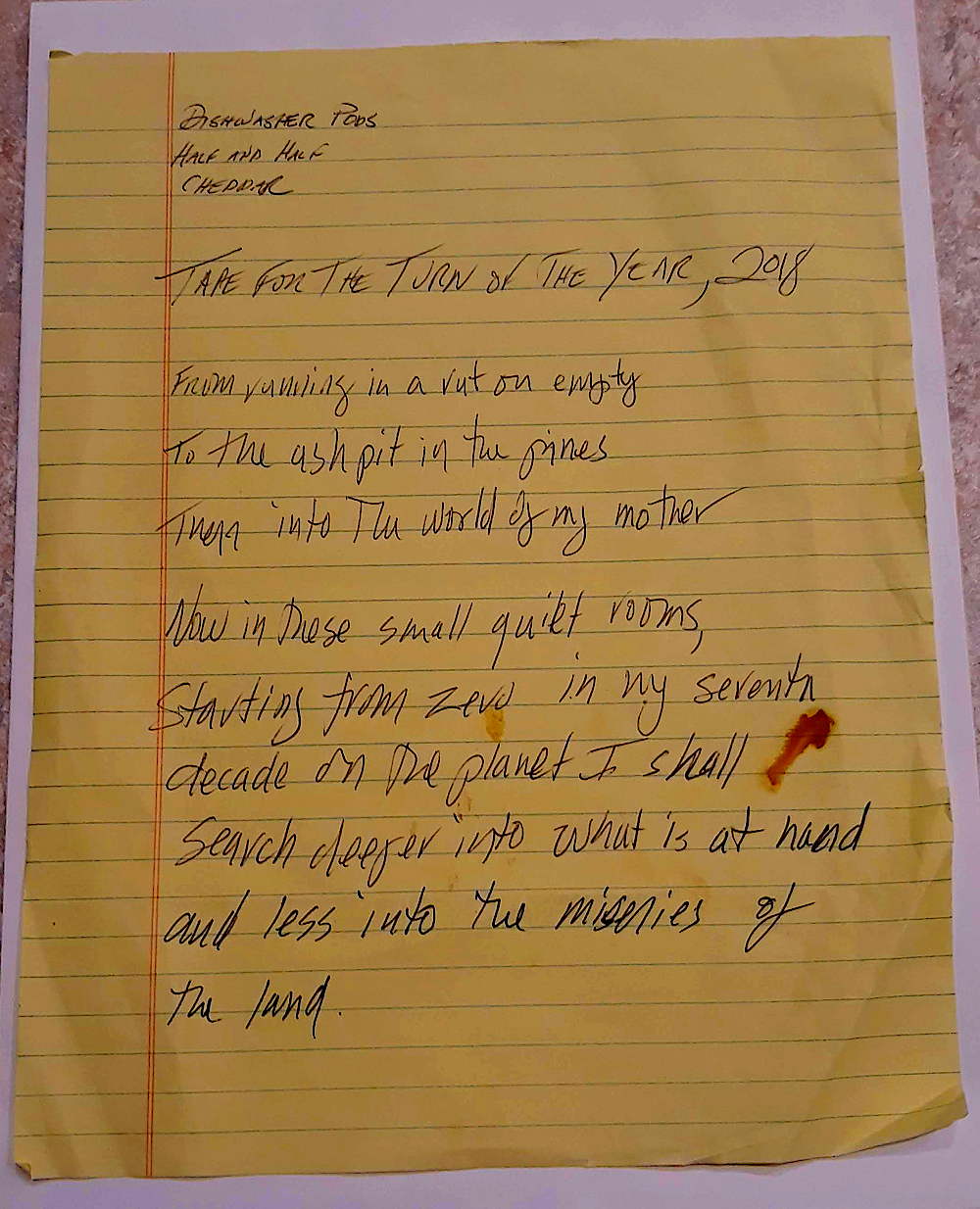 My astute reader lpdbw comments in Reason Will Not Decide at Last,    “I had to download it and blow it up to read it, but the grocery list/poem on the sidebar is beautiful. Earthy, stained, and evocative.”

Well, thank you for pointing out what I never thought at the time and didn’t think until now. It was just a sheet of paper torn from my ubiquitous yellow pad that I found when going through a box of papers from my first post-fire and very small apartment. It was one of several bales of “Notes to Self” I’d made over the decades in lieu of a journal (Ashes ashes all fall down). It summed up what I felt during the last week of December in a terrible year that was about to become much worse this year.

I cribbed the title from an A. R. Ammons poem I’d read some 40 years previously that had stuck in some set of neurons that made up my hard drive. I didn’t even write it out as a poem — not even one of verse blanked — but just wrote it as my hand moved in a kind of Ouija board manner. It wasn’t even a new resolution, just a fresh try at something that had always fallen short of the intended target. I knew it at the time since it was really just an appendix to the much more doable shopping list at the top.

As a poet, I’ve tried to hold true to this sort of thought because, as a poet, I always yearn to write in the affirmative. And, as a poet and a man, I constantly fail to write even a syllable towards the affirmative no matter how much I try to avoid the infinite efforts of the mad, mad media world to spin me up.

The world is too much with us; late and soon,
Getting and spending, we lay waste our powers;—
Little we see in Nature that is ours;
We have given our hearts away, a sordid boon!
This Sea that bares her bosom to the moon;
The winds that will be howling at all hours,
And are up-gathered now like sleeping flowers;
For this, for everything, we are out of tune;
It moves us not. Great God! I’d rather be
A Pagan suckled in a creed outworn;
So might I, standing on this pleasant lea,
Have glimpses that would make me less forlorn;
Have sight of Proteus rising from the sea;
Or hear old Triton blow his wreathèd horn.
— Wordsworth

Which reminds me that I have run out of those dishwasher pods again.

Next post: Gain Some Real Weight for the Holidays: Essential Craftsman Scott Wadsworth gives you a chance to win a 160# anvil for Christmas

Previous post: The 80s: Big Hair and the Big Suit