On the Epidemic of Political Gold-Digging Whores 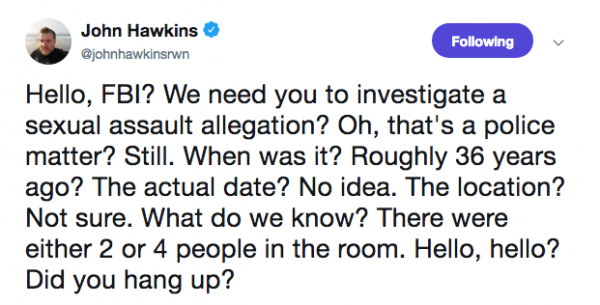 Of late a demented female seems to have grabbed the greasy MediaMic pole and, oozing hate at every pore, is oiling her way up and down the political runway like a slug doing the splits. “Christine Blasey-Ford” (The hyphen always signals feminist derangement) is the name but, since she holds a meaningless make-work job as a “professor” of psychology at some fifth-rate outrage factory known as Palo Alto “University” people keep calling her “Doctor” and “Professor.” She’s neither. She’s an ideological slut and a gold-digging political whore. She doesn’t deserve a dustmote of dignity.

What is this slut’s version of Whorestory? As Ann Coulter sums it up:

Christine Blasey Ford, remembered this in a therapy session 30-plus years after the alleged incident She doesn’t remember the time or place of the assault, told no one for 30 years and has no evidence or corroboration. Maybe the party was at Haven Monahan’s house. (He was the instigator of the fraternity gang rape reported in Rolling Stone, which never happened and — luckily for Monahan! — who doesn’t exist. Otherwise, he was in BIG trouble.)

Or Ace in the Morning Rant

So it looks like Brett Kavanaugh’s accuser has been identified and, guess what, she’s a progressive activist college professor who apparently scrubbed her entire social media presence before her name was made public. She sends her letter to Senator Diane Feinstein who sits on it for weeks and then, after the confirmation hearings are over, gives it to the FBI for investigation, only with the professor’s name redacted. And now it’s being reported that the professor will be a no-show at a proposed hearing next Monday

That’s it? That’s IT?! Well then a reasonable look at these facts on the ground and a reasonable person would have to conclude that Chrissy is not a noble or dignified person but a lying sack of ProWhore out on the media stroll in her tight little lie suit. She wants to be Drama Queen for a Day. She wants to take her little turn on the catwalk. Above all, she wants to get some speaking fees and a semi-fat book contract for a fine little paycheck. And she’ll get them. The Democrat pimpmasters always make sure these whores get paid in the “not-a-bribe-bribe” of speaking fees and book contracts. Sometimes handsomely over decades.

In short, a floor to ceiling wall to wall lie. Hill’s “consequence?” Millions of dollars in inflated salaries, brokeback book deals, and humped and pumped speaking fees in lieu of payment for a slander well done. Oh yes, and then there are the “honors” showered upon this political gold digging whore. The same sort of “punishment” awaits the latest psychotic slag in the never-ending leftist whore parade.

To quote Lenin, “Chto delat’? — What is to be done“? We know from eons of hard lessons that evil does not stop until it is stopped by force, by real punishment, by real consequences.

At the same time we are also reminded of the stern dictum by Claire Wolfe, “America is at that awkward stage; it’s too late to work within the system but too early to shoot the bastards.”

To which we can only say:

Really?
Are you sure?
Okay, but is it too early to dig up the ammo cases and start cleaning my gun?

In the meantime, let’s stop dignifying this gold-digging political whore with any title other than the one she earned, “Slut.”

Dude, there is an epidemic of gold digging whores in this country, and every night I put on the news and I’m waiting for someone to address it. Every night, never see it, you know. Every night I bring up gold digging whores and the whole crowd pulls back like I’m up here talking about Bigfoot, right? Like I’m saying the moon is made out of cheese or something. I’m talking about whores, people; they’re everywhere.

Previous post: Bear With Me: When Pepper Spray’s Got Nothing to Say to the Bear Eating Your Leg