On Lying by Peterson and Solzhenitsyn 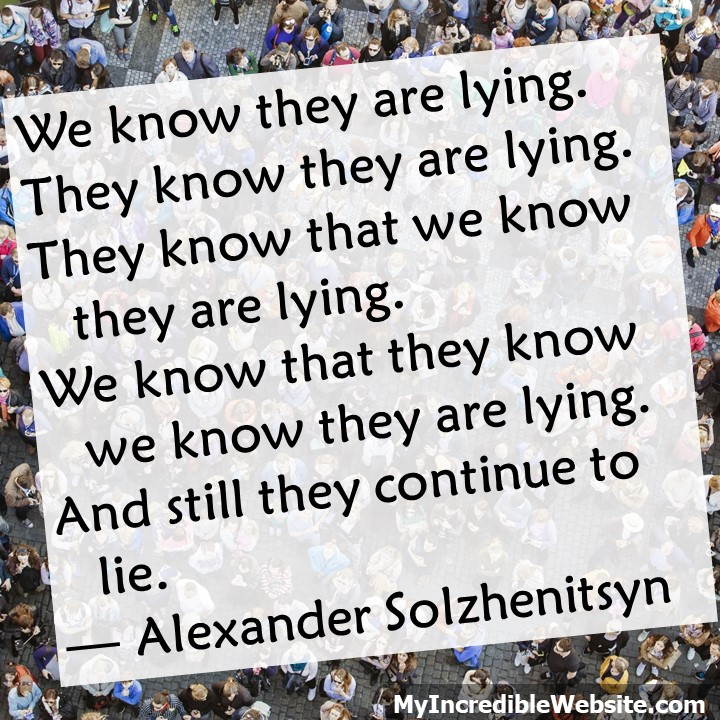 “Live Not By Lies” by Solzhenitsyn

When violence bursts onto the peaceful human condition, its face is flush with self-assurance, it displays on its banner and proclaims: “I am Violence! Make way, step aside, I will crush you!” But violence ages swiftly, a few years pass—and it is no longer sure of itself. To prop itself up, to appear decent, it will without fail call forth its ally—Lies. For violence has nothing to cover itself with but lies, and lies can only persist through violence. And it is not every day and not on every shoulder that violence brings down its heavy hand: It demands of us only a submission to lies, a daily participation in deceit—and this suffices as our fealty.

And therein we find, neglected by us, the simplest, the most accessible key to our liberation: a personal nonparticipation in lies! Even if all is covered by lies, even if all is under their rule, let us resist in the smallest way: Let their rule hold not through me!

And this is the way to break out of the imaginary encirclement of our inertness, the easiest way for us and the most devastating for the lies. For when people renounce lies, lies simply cease to exist. Like parasites, they can only survive when attached to a person.

We are not called upon to step out onto the square and shout out the truth, to say out loud what we think—this is scary, we are not ready. But let us at least refuse to say what we do not think!

This is the way, then, the easiest and most accessible for us given our deep-seated organic cowardice, much easier than (it’s scary even to utter the words) civil disobedience à la Gandhi.

Our way must be: Never knowingly support lies! Having understood where the lies begin (and many see this line differently)—step back from that gangrenous edge! Let us not glue back the flaking scales of the Ideology, not gather back its crumbling bones, nor patch together its decomposing garb, and we will be amazed how swiftly and helplessly the lies will fall away, and that which is destined to be naked will be exposed as such to the world.

And thus, overcoming our temerity, let each man choose: Will he remain a witting servant of the lies (needless to say, not due to natural predisposition, but in order to provide a living for the family, to rear the children in the spirit of lies!), or has the time come for him to stand straight as an honest man, worthy of the respect of his children and contemporaries? And from that day onward he:

· Will not write, sign, nor publish in any way, a single line distorting, so far as he can see, the truth;

· Will not utter such a line in private or in public conversation, nor read it from a crib sheet, nor speak it in the role of educator, canvasser, teacher, actor;

· Will not in painting, sculpture, photograph, technology, or music depict, support, or broadcast a single false thought, a single distortion of the truth as he discerns it;

· Will not cite in writing or in speech a single “guiding” quote for gratification, insurance, for his success at work, unless he fully shares the cited thought and believes that it fits the context precisely;

· Will not be forced to a demonstration or a rally if it runs counter to his desire and his will; will not take up and raise a banner or slogan in which he does not fully believe;

· Will not raise a hand in vote for a proposal which he does not sincerely support; will not vote openly or in secret ballot for a candidate whom he deems dubious or unworthy;

· Will not be impelled to a meeting where a forced and distorted discussion is expected to take place;

· Will at once walk out from a session, meeting, lecture, play, or film as soon as he hears the speaker utter a lie, ideological drivel, or shameless propaganda;

· Will not subscribe to, nor buy in retail, a newspaper or journal that distorts or hides the underlying facts.

This is by no means an exhaustive list of the possible and necessary ways of evading lies. But he who begins to cleanse himself will, with a cleansed eye, easily discern yet other opportunities.

==============
Note  by Edward E. Ericson, Jr. and Daniel J. Mahoney, The Solzhenitsyn Reader: Solzhenitsyn equates “lies” with ideology, the illusion that human nature and society can be reshaped to predetermined specifications. And his last word before leaving his homeland urges Soviet citizens as individuals to refrain from cooperating with the regime’s lies. Even the most timid can take this least demanding step toward spiritual independence. If many march together on this path of passive resistance, the whole inhuman system will totter and collapse. 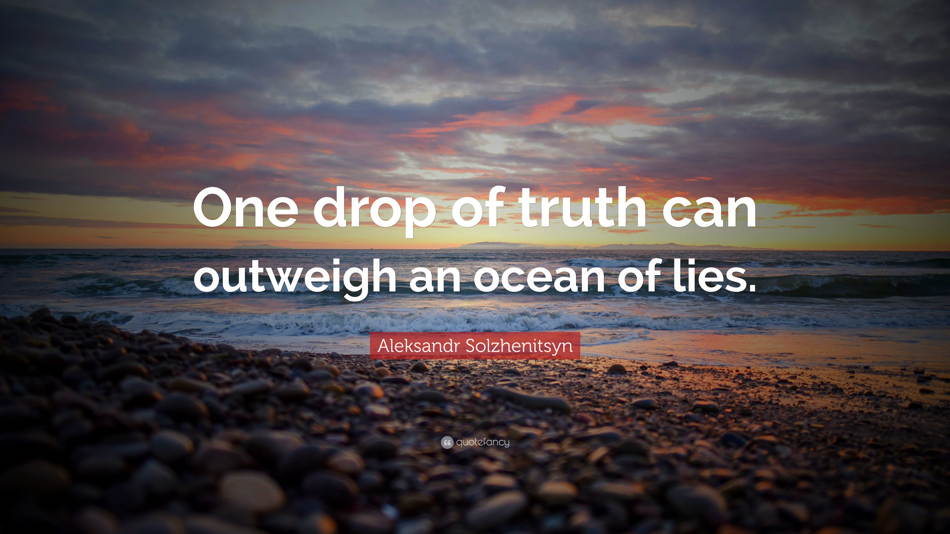 Next post: The Removal of Donald Trump: “DJT’s language as coded incitement. . . .”