Of the Termites’ Today and the Mayans’ Yesterdays 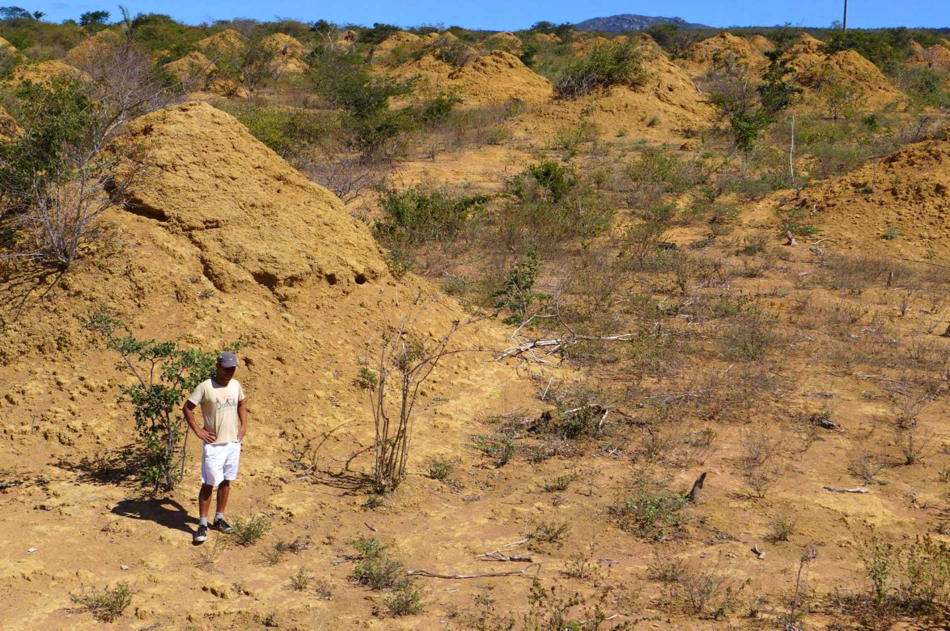 And fear not lest Existence closing your
Account and mine, should know the like no more;
The Eternal Saki from that Bowl has poured
Millions of Bubbles like us, and will pour.
— The Rubaiyat Of Omar Khayyam Poem by Omar Khayyam

Meanwhile, in Brazil, termite life goes on much as it has for nearly all of recorded history:

It includes approximately 200 million cone-shaped soil mounds that are 2.5 m tall and approximately 9 m in diameter. These mounds are not nests, but rather they are generated by the excavation of vast inter-connecting tunnel networks.

“These mounds were formed by a single termite species — known as Syntermes dirus — that excavated a massive network of tunnels to allow them to access dead leaves to eat safely and directly from the forest floor,” said study lead author Professor Stephen Martin, a researcher at the University of Salford, UK.

“The amount of soil excavated is over 10 km3, equivalent to 4,000 great pyramids of Giza.”

“Perhaps most exciting of all — the mounds are extremely old — up to 4,000 years, similar to the ages of the pyramids.”

Here, we describe a vast array of soil mounds constructed by termites (Syntermes dirus) that has persisted for up to 4000 years and covers an estimated 230,000 km2 of seasonally dry tropical forest in a relatively undisturbed and climatically stable region of Northeast Brazil. The mounds are not nests, but rather they are generated by the excavation of vast inter-connecting tunnel networks, resulting in approximately 10 km3 of soil being deposited in 200 million conical mounds that are 2.5 m tall and approximately 9 m in diameter. S. dirus termites are still present in the soil surrounding the mounds and we found that intra-specific aggression occurred at a scale much larger than an individual mound.

Elsewhere in Central and South America men’s civilizations seem to last somewhat less than those of the termites before melting back into the landscape. Guatemala’s Maya Society Featured Huge ‘Megalopolis,’ LiDAR Data Show   “Most people had been comfortable with population estimates of around 5 million,” said Estrada-Belli, who directs a multi-disciplinary archaeological project at Holmul, Guatemala. “With this new data it’s no longer unreasonable to think that there were 10 to 15 million people there—including many living in low-lying, swampy areas that many of us had thought uninhabitable.” Virtually all the Mayan cities were connected by causeways wide enough to suggest that they were heavily trafficked and used for trade and other forms of regional interaction. These highways were elevated to allow easy passage even during rainy seasons. In a part of the world where there is usually too much or too little precipitation, the flow of water was meticulously planned and controlled via canals, dikes, and reservoirs.

Among the most surprising findings was the ubiquity of defensive walls, ramparts, terraces, and fortresses. “Warfare wasn’t only happening toward the end of the civilization,” said Garrison. “It was large-scale and systematic, and it endured over many years.”

The results suggest that Central America supported an advanced civilization that was, at its peak some 1,200 years ago, more comparable to sophisticated cultures such as ancient Greece or China than to the scattered and sparsely populated city states that ground-based research had long suggested.

The ancient Maya never used the wheel or beasts of burden, yet “this was a civilization that was literally moving mountains,” said Marcello Canuto, a Tulane University archaeologist and National Geographic Explorer who participated in the project.