Now Voyager: “Voyager 1 is 40 years old, awash in corrosive cosmic radiation, 13 billion miles from earth, yet we are still talking to it and it still works” 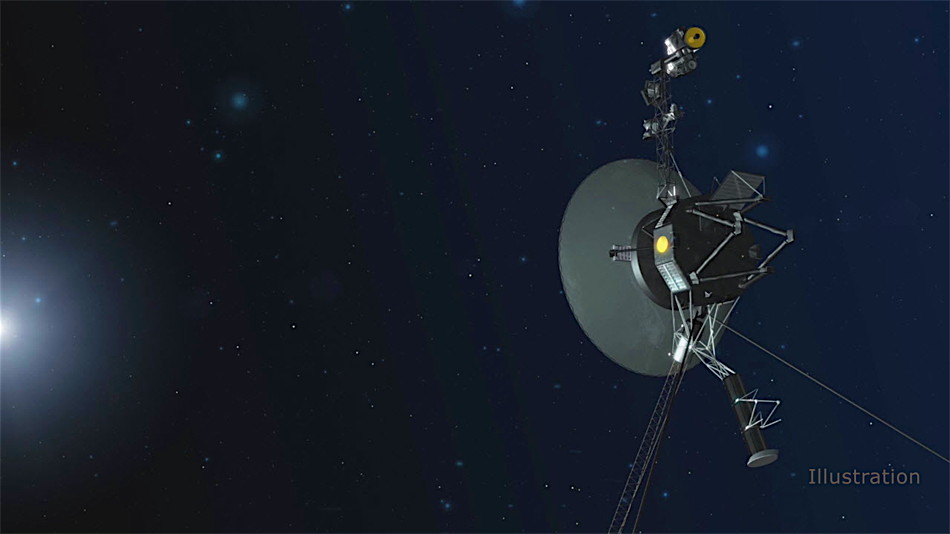 Voyager 1 Fires Up Thrusters After 37 Years, something which is, dare I say, mighty white of it.

If you tried to start a car that’s been sitting in a garage for decades, you might not expect the engine to respond. But a set of thrusters aboard the Voyager 1 spacecraft successfully fired up Wednesday after 37 years without use.

Voyager 1, NASA’s farthest and fastest spacecraft, is the only human-made object in interstellar space, the environment between the stars. The spacecraft, which has been flying for 40 years, relies on small devices called thrusters to orient itself so it can communicate with Earth. These thrusters fire in tiny pulses, or “puffs,” lasting mere milliseconds, to subtly rotate the spacecraft so that its antenna points at our planet. Now, the Voyager team is able to use a set of four backup thrusters, dormant since 1980.

“With these thrusters that are still functional after 37 years without use, we will be able to extend the life of the Voyager 1 spacecraft by two to three years,” said Suzanne Dodd, project manager for Voyager at NASA’s Jet Propulsion Laboratory, Pasadena, California.

Since 2014, engineers have noticed that the thrusters Voyager 1 has been using to orient the spacecraft, called “attitude control thrusters,” have been degrading. Over time, the thrusters require more puffs to give off the same amount of energy. At 13 billion miles from Earth, there’s no mechanic shop nearby to get a tune-up.

The Voyager team assembled a group of propulsion experts at NASA’s Jet Propulsion Laboratory, Pasadena, California, to study the problem. Chris Jones, Robert Shotwell, Carl Guernsey and Todd Barber analyzed options and predicted how the spacecraft would respond in different scenarios. They agreed on an unusual solution: Try giving the job of orientation to a set of thrusters that had been asleep for 37 years.

“The Voyager flight team dug up decades-old data and examined the software that was coded in an outdated assembler language, to make sure we could safely test the thrusters,” said Jones, chief engineer at JPL.

In the early days of the mission, Voyager 1 flew by Jupiter, Saturn, and important moons of each. To accurately fly by and point the spacecraft’s instruments at a smorgasbord of targets, engineers used “trajectory correction maneuver,” or TCM, thrusters that are identical in size and functionality to the attitude control thrusters, and are located on the back side of the spacecraft. But because Voyager 1’s last planetary encounter was Saturn, the Voyager team hadn’t needed to use the TCM thrusters since November 8, 1980. Back then, the TCM thrusters were used in a more continuous firing mode; they had never been used in the brief bursts necessary to orient the spacecraft.

All of Voyager’s thrusters were developed by Aerojet Rocketdyne. The same kind of thruster, called the MR-103, flew on other NASA spacecraft as well, such as Cassini and Dawn.

On Tuesday, Nov. 28, 2017, Voyager engineers fired up the four TCM thrusters for the first time in 37 years and tested their ability to orient the spacecraft using 10-millisecond pulses. The team waited eagerly as the test results traveled through space, taking 19 hours and 35 minutes to reach an antenna in Goldstone, California, that is part of NASA’s Deep Space Network.

Lo and behold, on Wednesday, Nov. 29, they learned the TCM thrusters worked perfectly — and just as well as the attitude control thrusters.

“The Voyager team got more excited each time with each milestone in the thruster test. The mood was one of relief, joy and incredulity after witnessing these well-rested thrusters pick up the baton as if no time had passed at all,” said Barber, a JPL propulsion engineer.

The plan going forward is to switch to the TCM thrusters in January. To make the change, Voyager has to turn on one heater per thruster, which requires power — a limited resource for the aging mission. When there is no longer enough power to operate the heaters, the team will switch back to the attitude control thrusters.

The thruster test went so well, the team will likely do a similar test on the TCM thrusters for Voyager 2, the twin spacecraft of Voyager 1. The attitude control thrusters currently used for Voyager 2 are not yet as degraded as Voyager 1’s, however.
Voyager 2 is also on course to enter interstellar space, likely within the next few years.

Next post: On Advent: "We Are All Lying in the Mud, But Some of Us Are Looking at the Stars"