Now I Lay Me Down to Sleep… 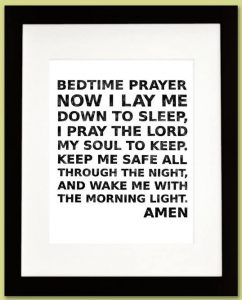 “Now I lay me down to sleep.
I pray the Lord my soul to keep.
If I should die before I wake….”

It is not clear that the prayer helps allay the fear of the dark and of death in that dark, but as children we learn it anyway. It is probably the first prayer that is learned. Its lesson is that, parent or child, we are hostage to fortune or to His ineffable will. Being bound to His will is one of the most fundamental calisthenics of faith.

Most children remain afraid of the dark but learn not to admit it. At some point, you are instructed to grow out of it. You become an adult; no longer a slave to childish fears without foundations. You tell yourself, “I’m not afraid of the dark.” You’re lying but, like so many other lies that let you get through the day, you lie this lie for so long that you forget it is what it is; a lie.

I feared the dark as a child and when I grew to be a man I still felt uneasy when consigned to a room that was “too dark.” I developed some manly and not-so-manly methods for mitigating the dark — light curtains, dim baseboard night lights in the hallway, falling asleep with the television on a timer, votive candles, the whole inventory, the entire catastrophe. After some years of sleeping safe within these rituals and relics, I forgot that I was, in the core of my being, still afraid of the dark; afraid that “I should die before I wake.”

The thing about dying and then being returned to life is that, like a ghost half-seen out of the corner of the eye or in a shadow on the stairs, the experience keeps coming back. You think you’ve pretty much exhausted what you think about it — exhausted all there is to think about it — and then you are presented with a new moment, a new cause for reflection.

A bit over a week ago, at around midnight, I decided to go to bed. I went through all my rituals and dressed in my pajamas and went into the bedroom and lay down on the bed. As I lay there the old prayer from childhood appeared in my mind after many years of not being thought of at all,

It appeared so vividly it was as if an alien, almost feminine, voice had recited it to my ears in that room. I lay there feeling anything but sleepy and wanted to know about the origins of this common prayer.

As I looked into the origins of the prayer I discovered that a “kinder, gentler” variant has lately been introduced as:

Now I lay me down to sleep,
I pray the Lord, my soul to keep;
Guide and guard me through the night,
And wake me with the morning’s light.

I suppose that’s a way of making the poem fit for a more secular society in which nothing fatal ever happens to children. Until, of course, it does. But that’s for another, younger, and more unread generation. I’m stuck with the original in my memory.

As such it is one of my earliest memories. It was almost as certainly the very first rhyme or poem that I memorized. It would have been taught to me by my mother as she tucked me in in my childhood and calmed me for the night. I know that she, and hundreds of millions of other parents who have taught it to their children, wanted it to comfort me and I suppose it did. Thinking about it in my bed on that night last week, however, it didn’t seem to be comforting. Instead, it seemed like a horror sandwiched into the middle of a plea for rescue:

It was terrifying because, as it occurred to me then, I had experienced the reality of the prayer. I had actually died before I could wake. I continued in death for some unknown minutes and then was revived and kept in a deathlike coma for 13 days; a time that I, gratefully, have no memory of whatsoever. And, it came to me at t hat time on that night that I had died in the bed I was currently lying down in and thinking of this old childhood prayer.

I had, without realizing it, gotten used to sleeping in my deathbed.

For a while that evening this was a very disturbing realization. In time I got used to it and I drifted off to sleep in my deathbed many times. In time we all drift off our dying bed if we are lucky enough to find our way there for our time of dying.

When I died I’d like to say that as I drifted off my final thought was,

If I should die before I wake,
I pray the Lord my soul to take.

Like my first death, I don’t remember anything about those last moments, or the ones that came after. So I can’t say I said a prayer. I can only pray I did.

Next post: Noted in Passing: Large Groups of Rogue Amish Loot Philadelphia at Will

Previous post: Noted in Passing: “Get off the stage before the brains dim. . . .”