Today as Seen in 1956: “The future is already here. It’s just not evenly distributed” 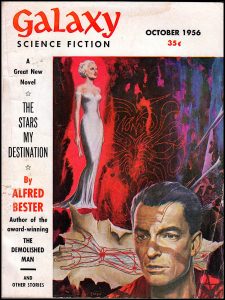 The prologue to The Stars My Destination (AKA Tiger! Tiger!) by Alfred Bester A NOVEL PUBLISHED IN 1956 [Edited for length]

THIS WAS A GOLDEN AGE, a time of high adventure, rich living, and hard dying… but nobody thought so. This was a future of fortune and theft, pillage and rapine, culture and vice… but nobody admitted it. This was an age of extremes, a fascinating century of freaks… but nobody loved it… The [Earth] seethed with activity… fighting, feeding, and breeding, learning the new technologies that spewed forth almost before the old had been mastered…

…. The transition was more spectacular than the change-over from horse and buggy to gasoline age…. Social, legal, and economic structures crashed while the new customs and laws … mushroomed in their place. There were land riots as the … poor deserted slums to squat in plains and forests, raiding the livestock and wildlife. There was a revolution in [privacy]: labyrinths and masking devices had to be introduced … There were crashes and panics and strikes and famines as pre-[internet] industries failed. Plagues and pandemics raged as … vagrants carried disease and vermin into defenseless countries. Malaria, elephantiasis, and the breakbone fever came north to Greenland; rabies returned to England after an absence of three hundred years. The Japanese beetle, the citrous scale, the chestnut blight, and the elm borer spread to every corner of the world, and from one forgotten pesthole in Borneo, leprosy, long imagined extinct, reappeared.

Crime waves swept the planet… as underworlds took to [ the Internet] around the clock, and there were brutalities as the police fought them without quarter. There came a hideous return to the worst prudery of Victorianism as society fought the sexual and moral dangers of jaunting with protocol and taboo….

It was an age of freaks, monsters, and grotesques. All the world was misshapen in marvelous and malevolent ways. The Classicists and Romantics who hated it were unaware of the potential greatness of the twenty-fifth century. They were blind to a cold fact of evolution… that progress stems from the clashing merger of antagonistic extremes, out of the marriage of pinnacle freaks. Classicists and Romantics alike were unaware that the Solar System was trembling on the verge of a human explosion that would transform man and make him the master of the universe. — It is against this seething background of the twenty-fifth century that the vengeful history of Gulliver Foyle begins.

Next post: This. Is. The. Truth. About. Iran. Iranian Woman Speaks Truth On Recent Attacks