Noted in Passing: This passage from Tom Clancy’s 1994 Debt of Honor 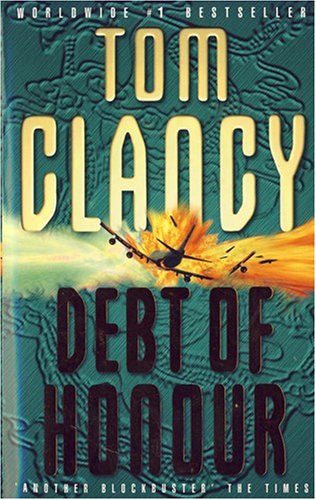 The streak of light startled Sato, and he flinched somewhat from surprise rather than fear, then saw the missile heading for his left-inboard engine. The explosion was surprisingly loud, and alarms told him that the engine was totally destroyed, but he was a mere thousand meters away from the white building. The aircraft dipped and yawed slightly to the left. Sato compensated for it without a thought, adjusting trim and nosing down for the south side of the American house of government. They would all be there. The President, the parliamentarians, all of them. He selected his point of impact just as finely as any routine landing and his last thought was that if they could kill his family and disgrace his country, then they would pay a very special price for that. His last voluntary act was to select the point of impact, two-thirds of the way up the stone steps. That would be just about perfect, he knew . . .

Nearly three hundred Ions of aircraft and fuel struck the east face of the building at a speed of three hundred knots. The aircraft disintegrated on impact. No less fragile than a bird, its speed and mass had already fragmented the columns outside the walls. Next came the building itself. As soon as the wings broke up, the engines, the only really solid objects on the aircraft, shot forward, one of them actually smashing into and beyond the House Chamber.

The Capitol has no structural steel within its stone walls, having been built in an age when stone piled on stone was deemed the most long-lasting form of construction. The entire east face of the building’s southern half was smashed to gravel, which shot westward-but the real damage took a second or two more, barely time for the roof to start falling down on the nine hundred people in the chamber: one hundred tons of jet fuel erupted from shredded fuel tanks, vaporizing from the passage through the stone blocks. A second later it ignited from some spark or other, and an immense fireball engulfed everything inside and outside of the building.

The volcanic flames reached out, seeking air and corridors that held it, forcing a pressure WHVC throughout the building, even into the basement. The initial impact was enough to drop them all to their knees, and now the Secret Service agents were on the edge of real panic. Ryan’s first instinctive move was to grab his youngest daughter, then to push the rest of the family to the floor and cover them with his body. He was barely down when something made him look back, north up the tunnel. The noise came from there, and a second later there was an advancing orange wall of flame. There was not even time to speak. He pushed his wife’s head down, and then two more bodies fell on top to cover them. There wasn’t time for anything else but to look back at the advancing flames- -over their heads, the fireball had already exhausted the supply of oxygen. The mushrooming cloud leaped upwards, creating its own ministorm and sucking air and gas out of the building whose occupants it had already killed- -it stopped, not a hundred feet away, then pulled away as rapidly as it had advanced, and there was an instant hurricane in the tunnel, going the other way. A door was wrenched off its hinges, sliding toward them but missing.

Next post: Noted in Passing: Zelensky is lLiving the dream

Previous post: “This is A Naked Lady” Sex is a virus that infects new technology first