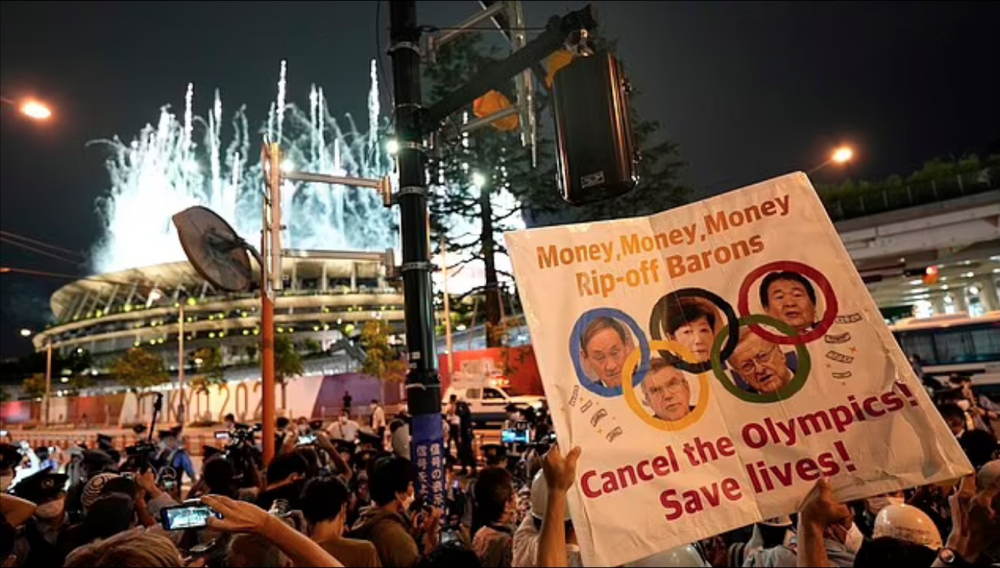 Outside the Olympic stadium today, as multi-millionaire bling merchant John Legend wailed about imagining a world of no possessions, hundreds of mainly Japanese protestors chanted ‘STOP THE OLYMPICS!’ and carried placards saying, ‘LIVES OVER OLYMPICS!’

Be honest, we were all bloody falling asleep during that endlessly downbeat and dreary opening ceremony for the Tokyo Olympics.

It was like watching the Eurovision Song Contest - an annual competition between the most god-awful singers in each European country – with just a handful of smug old farts in suits for an audience, and only attended by the few contestants who could be bothered to turn up.

By comparison to the joyous and spectacular fervor of the opening ceremonies for the past two Olympics in Rio and London, this was frankly an embarrassing snoozefest.

And aside from the tedious ‘entertainment’ – since when was a guy running on a treadmill supposed to thrill the soul? – it just felt so jarringly wrong to observe a soulless procession of gurning flag-waving athletes waving to a sea of silent fake fan faces in the empty 68,000 seats, with a tiny crowd of under 1000 made up solely of privileged foreign dignitaries and diplomats including Japan’s Emperor Naruhito and America’s First Lady Jill Biden, International Olympic Committee members and Olympic sponsors.

Though the latter didn’t include any executives from key sponsor Toyota, the largest carmaker in Japan and main supplier of cars for the Games, who pulled Japanese TV ads about the Olympics for fear of alienating its local market as polls show 70% of Japanese people don’t want the Games to go ahead.

Those people believe their leaders have greedily put commercial interests – the Olympics is a money-making machine for host nations – over protecting lives from the pandemic….

Due to draconian covid restrictions, winners will have to wear masks on the podiums and put their own medals, handed to them by officials wearing disinfected gloves, around their necks.

All to the deafening sound of virtual silence from an empty stadium.

It’s hard to imagine a less inspiring moment or image for an Olympian who’s dreamed all their life of this, isn’t it?

And that’s before we even get to other troublesome issues, like the first transgender athlete to compete in the Olympics, New Zealand weightlifter Laurel Hubbard, in what many see as a direct threat to the viability of women’s sport.

Is anyone truly going to feel the spirit of the newly adapted Olympic motto ‘Faster, Higher, Stronger, Together’ applies if Hubbard wins Gold and deprives a woman born to a physically inferior female biological body of victory?

And what’s going to happen if ‘activist’ American hammer thrower Gwen Berry wins a medal, decides to ignore an Olympic ruling not to make political gestures during medal ceremonies, and performs another churlish tantrum as the US anthem plays, as she did in the trials?

RTWT AT PIERS MORGAN: The boring Tokyo Olympics opening ceremony proved why Games should be canceled