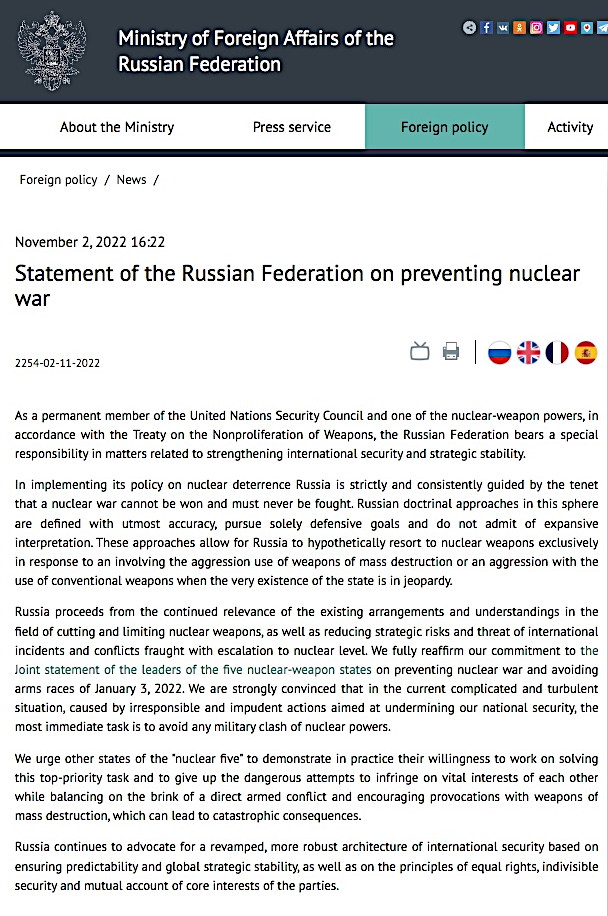 “Balancing on the brink of a direct armed conflict and encouraging provocations with weapons of mass destruction, which can lead to catastrophic consequences.”

As a permanent member of the United Nations Security Council and one of the nuclear-weapon powers, in accordance with the Treaty on the Nonproliferation of Weapons, the Russian Federation bears a special responsibility in matters related to strengthening international security and strategic stability.

In implementing its policy on nuclear deterrence Russia is strictly and consistently guided by the tenet that a nuclear war cannot be won and must never be fought. Russian doctrinal approaches in this sphere are defined with utmost accuracy, pursue solely defensive goals and do not admit of expansive interpretation. These approaches allow for Russia to hypothetically resort to nuclear weapons exclusively in response to an involving the aggression use of weapons of mass destruction or an aggression with the use of conventional weapons when the very existence of the state is in jeopardy.

Russia proceeds from the continued relevance of the existing arrangements and understandings in the field of cutting and limiting nuclear weapons, as well as reducing strategic risks and threat of international incidents and conflicts fraught with escalation to nuclear level. We fully reaffirm our commitment to the Joint statement of the leaders of the five nuclear-weapon states on preventing nuclear war and avoiding arms races of January 3, 2022. We are strongly convinced that in the current complicated and turbulent situation, caused by irresponsible and impudent actions aimed at undermining our national security, the most immediate task is to avoid any military clash of nuclear powers.

We urge other states of the “nuclear five” to demonstrate in practice their willingness to work on solving this top-priority task and to give up the dangerous attempts to infringe on vital interests of each other while balancing on the brink of a direct armed conflict and encouraging provocations with weapons of mass destruction, which can lead to catastrophic consequences.

Russia continues to advocate for a revamped, more robust architecture of international security based on ensuring predictability and global strategic stability, as well as on the principles of equal rights, indivisible security and mutual account of core interests of the parties. —Statement of the Russian Federation on preventing nuclear war – Ministry of Foreign Affairs of the Russian Federation

Next post: I had a Fortress Once in Paradise

Previous post: Noted in Passing: Rumble to France, “Fuck off.”