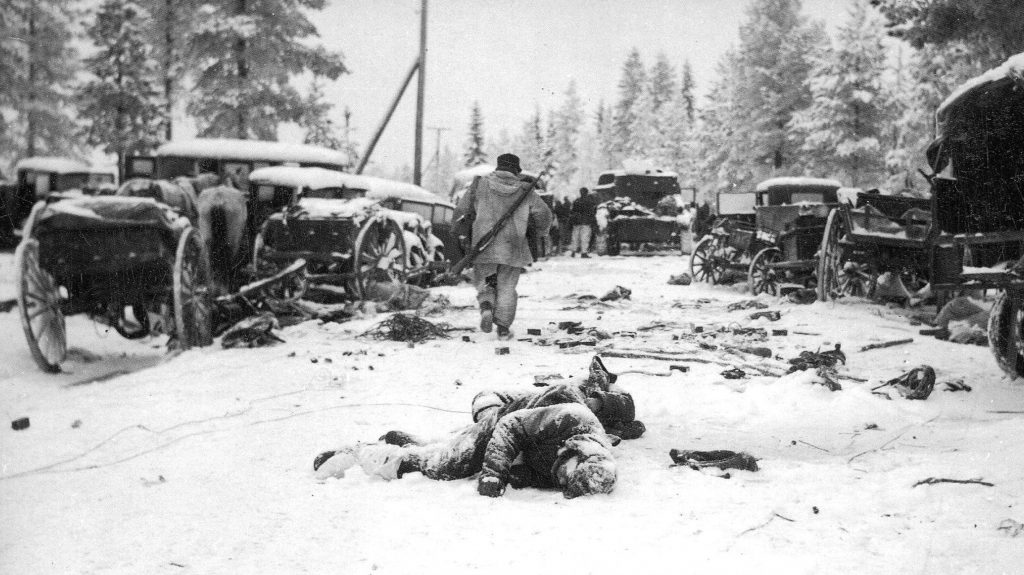 Motti is Finnish military slang for a totally encircled enemy unit. The tactic of encircling it is called motitus, literally meaning the formation of an isolated block or “motti”, but in effect meaning an entrapment or envelopment.

The word means “mug” in many Finnish dialects; an alternate translation refers to a cubic meter of firewood, a relatively small area in which an encircled enemy could be “cut down” like trees. motti is thus related to kessel. A motti in military tactics therefore means the formation of “bite sized” enemy units which are easier to contain and deal with.

This tactic of envelopment was used extensively by the Finnish forces in the Winter War and the Continuation War to good effect. It was especially effective against some of the mechanized units of the Soviet Army, which were effectively restricted to the long and narrow forest roads with virtually no way other than forwards or backwards. Once committed to a road, the Soviet troops effectively were trapped. Unlike the mechanized units of the Soviets, the Finnish troops could move quickly through the forests on skis and break columns of armoured Soviet units into smaller chunks (e.g., by felling trees along the road). Once the large column was split up into smaller armoured units, the Finnish forces attacking from within the forest could strike the weakened column. The smaller pockets of enemy troops could then be dealt with individually by concentrating forces on all sides against the entrapped unit.

A motitus is therefore a double envelopment manoeuvre, using the ability of light troops to travel over rough ground to encircle enemy troops on a road. Heavily outnumbered but mobile forces could easily immobilize an enemy many times more numerous.

By cutting the enemy columns or units into smaller groups and then encircling them with light and mobile forces, such as ski-troops during winter, a smaller force can overwhelm a much larger force. If the encircled enemy unit was too strong, or if attacking it would have entailed an unacceptably high cost, e.g., because of a lack of heavy equipment, the motti was usually left to “stew” until it ran out of food, fuel, supplies, and ammunition and was weakened enough to be eliminated. Some of the larger mottis held out until the end of the war because they were resupplied by air. Being trapped, however, these units were not available for battle operations.

The largest motti battles in the Winter War occurred at the Battle of Suomussalmi. Three Finnish regiments enveloped and destroyed two Soviet divisions as well as a tank brigade trapped on a road.