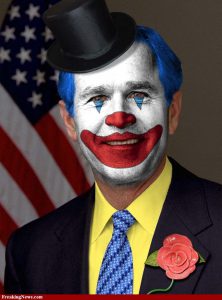 It is difficult not to conclude that an Obama regime would have been impossible without the Bush presidency preceding it. If someone had said in 2000 that electing Bush would result in a Chicago thug and Marxist becoming president in 2009 he would have been thought mad. But here we are.

Even as he prepares to turn out the lights of his presidency, he dabbles in bipartisan idiocy that go far to make laughable the reasons conservatives voted for him. Here is just one example of his recent gibberish.

I readily concede I chucked aside my free-market principles when I was told … the situation we were facing could be worse than the Great Depression.

Memo to Bush: Principles are not principles if you can so readily abandon them. They are then nothing but vague notions and feelings. Imagine Reagan saying something like that. Reagan knew that principles served as guiding lights behind every action, not as mere conveniences that one could abandon at whim.

Bush does not at all comprehend what Obama is.

President George W. Bush is offering some advice to his successor, when it comes to dealing with his critics. He says in the end, Barack Obama will have to “do what he thinks is right.”…Bush said he wishes Obama “all the very best.”

Obama desires to turn the nation into a socialist dependency wholly controlled by the Democrat Party. He plans to allow sodomites in the military. He has laid out plans to enlist the entire nation in his Marxist crusade. His fanaticism toward infanticide literally knows no bounds. And Bush wishes the creature “all the very best.”

Bush is kinder to Obama than he ever was to those conservatives who placed him in office.

FROM: A Legacy Of Nothing at the fondly remembered  “The Return of Scipio”

Previous post: Noted in Passing: FROM 2003 deep into the Bush Years