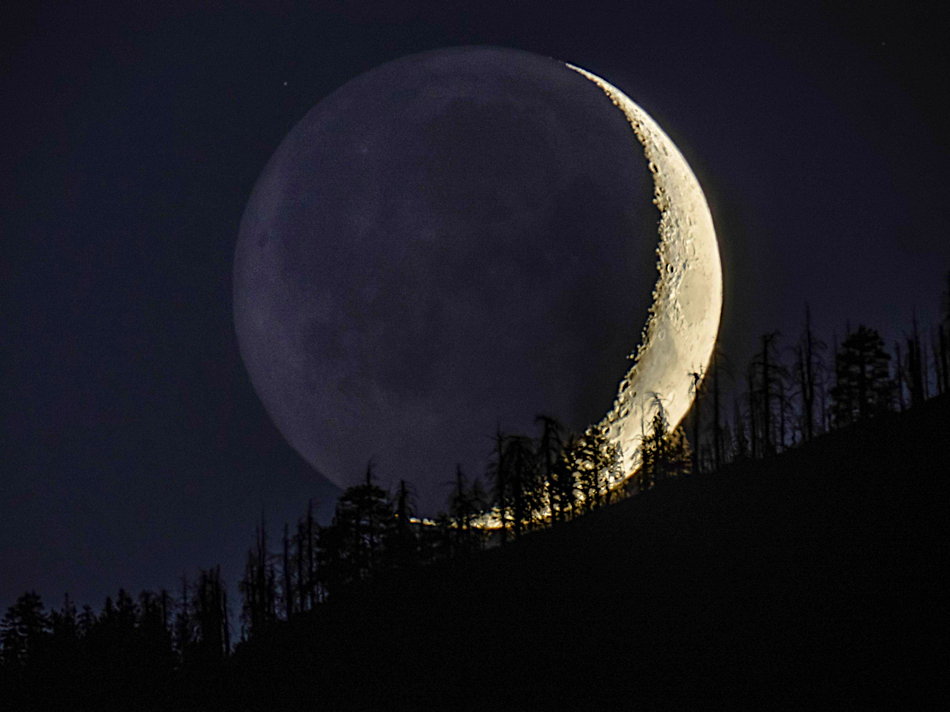 The world is charged with the grandeur of God.
It will flame out, like shining from shook foil;
It gathers to a greatness, like the ooze of oil
Crushed.  — Hopkins

Stepping outside after the fall of first dark. Rose and gold leaves shrugged off the Copper Beech and the Japanese Maple glimmer on the damp pebbled walk in the soft light from the porch. I turn west along the sidewalk towards the corner and glide into the brief shadows of the cedars. There, beyond their edges as I glance up… There, behind the nimbus of mist haloed around the streetlight… There the new moon rises tilted like some open, supplicating palm against the darkening last faint line of day fading far away in the West.

Cupped in the upturned arc of the new moon I see, faintly, the disk of Earth’s shadow — dark against darker dark.

And yet here I am. Here we all are.

You say you don’t believe in a Creator?

You say you don’t believe in grace?

You say you don’t believe in miracles?

Walk with me to the store for a quart of milk. Walk in star shine from the night lights forged in the impossible fury of the First Moment.

Open all your eyes.

Look outside — look beyond — yourself.

“When the morning stars sang together, and all the sons of God shouted for joy?”

Next post: Bill Whittle: “No retreat, baby. No surrender.”

Previous post: Dekochari: (trans)”The Japanese… nuked too much or not enough?”