RantOmatic: Lileks, James on “The Sorrow and the City” [Bumped and updated] 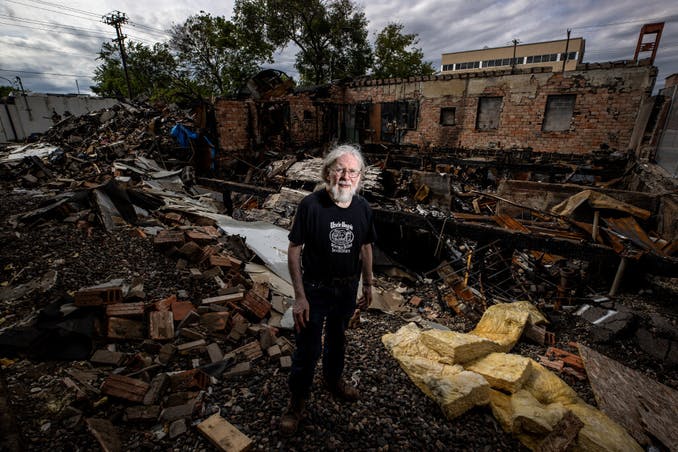 This from the paper James Lileks works for as a columnist:  Mpls. keeps landscape of rubble as city wants taxes before permit

I know the guy in the picture. He owned Uncle Hugo’s/Uncle Edgar’s, named for the premier awards for science fiction and mystery writing. Hundreds of authors signed books for fans in that store. I came out in a blizzard to have Larry Corriea sign a book for me. Don Blyly opened in 1974, and Uncle Hugo’s was the oldest independent SF bookstore in the U.S.

The store was miles from the police precinct. It wasn’t even that close to Lake Street. But someone busted out the windows, and someone tossed in some fuel. It takes no imagination to figure out how a building with no sprinklers, but chock full of dry paper would burn. It burns even better if the fire department never comes.

Don’s son organized the GoFundMe. It’s raised somewhere over $100,000. Insurance will provide some more, but the lost is estimated at half a million dollars, and that doesn’t include the priceless signed first editions that were consumed.

Don became the face of Minneapolis’ vicious policies. While he was in limbo, unable to get a permit to clean up (it’s a lot more than just property taxes), the contractor for the dental office next door knocked down salvageable walls, and dumped debris into the hole of Don’s store. Nice, eh? You save on dump fees that way. Oh, and prove that a store built in the early 1960s did not have asbestos in it, or pay triple for the more expensive cleanup.

Can one even get a contractor right now? They have plenty of customers. The corporate chain stores have been scoured down to the pad, but they have resources a guy like Don doesn’t have. A lot of those chain stores aren’t going to rebuild in the old form; I know three of the five Walgreens will not. The shoplifting was so bad, what with the city and county refusing to prosecute theft. They’ll open a drive-thru pharmacy only store.

I suppose Don didn’t have much theft. Shoplifters don’t grab and run with books. But he still wants to rebuild, and reopen in Minneapolis. Don is an idiot. I don’t know his politics, but I’m betting he did not vote for any R- candidate in the last 40 years. I bet he’s regretting that he didn’t have BLM signs in all of the windows the thugs broke to start the fire.

Chain stores are a cancer on the body of towns and cities. I didn’t used to think so, but I’ve been convinced. Business owners care about the town. Store managers don’t.

Who thinks like this? The ideological whip holders, the privileged 1%, perhaps, but not the foot soldiers enjoying the chaos. They will end up with some consumer goods, a bricked phone, awesome pictures for social media, tales to tell, a burnishing of the meaningless credentials they use to make themselves feel like good people. (All the people involved in the rioting and looting would be angry if you called them bad people. There’s no deficit of self-esteem in that whoopin’ hootin’ crowd: these stores are all full of L’Oreal, and they deserve it!)

There were two ideas that took a catastrophic hit in 2020:

Next post: New York, New York, what a wonderful town!