Netflix Debuts The All New Dumb and Dumber Channel 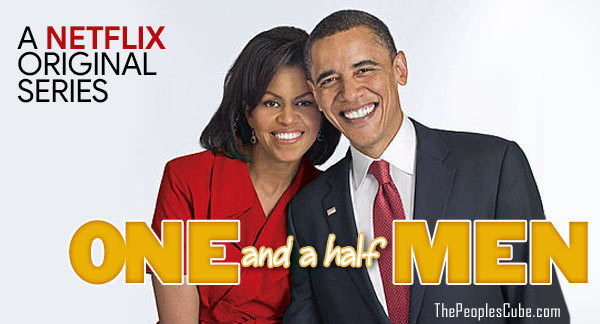 The Peoples’ Cube Explains It All and the exciting offerings just around the corner with Barack and Michelle Obama do Netflix. And while no one yet has the slightest clue about the content, let us be the first to announce the list of potential titles.

The Wire
A team of Obama loyalists inside the DOJ and the FBI try to prevent a government takeover by wiretapping the presidential campaign of the Orange Monster.

Orange is the New Black
The Orange Monster replaces the first black president in the Oval Office.

The Odd Couple
Season 1: Obama transforms America with his phone and his pen. Season 2: The Orange Monster comes and erases Season 1.

One and a Half Men
The life and times of Barack and Michelle Obama.

Air America Rides Again
Barack and Michelle go on magical adventures, learning about the wonders of Global Warming, lowering the sea levels, and making up fun scientific facts across a variety of locations and time periods.

The Americans
Barack and Michelle Obama are two KGB spies in an arranged marriage who are posing as Americans in Washington, D.C., shortly after he is elected president.

Tax and the City
We’re better than you and you know it. So kick back, eat your kale, and watch us party like there’s no tomorrow. When we run out of food, we’ll blame the Republicans.