Monkey in a Box: Best long read of the year so far 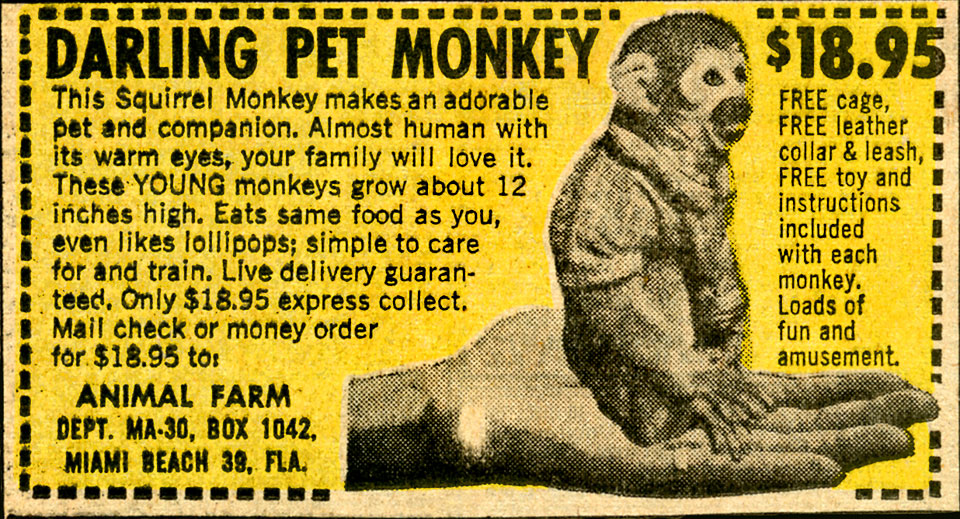 So my mom’s having a big bridge party. We’ve been, you know, squeezed into our plaid jackets, little red bowties and our hair’s been slicked down and we look very nice – we look like twins. And we’re just kind of sitting there smiling so we don’t embarrass anybody and they’re just pointing and pinching our cheeks. By the way, the cardinal rule in our house is you never ever embarrass your mother in front of the bridge club.

That is the worst thing you can do. So as we sit there petrified that we might embarrass our mother, there’s a knock at the door, it’s the postman. And the postman has a box addressed to me and my brother. And it’s the size of a shoebox. And in the front of the shoebox is a little, tiny metal grill. And on the little metal grill, what we see is a little monkeys mouth going (monkey beathing) up against this thing. So when my mother, seeing this monkey, and seeing it’s from Monkey Island or wherever it was from – and she says, oh my god. I don’t care what the boys have ordered. Take this thing back, it’s not coming to my house. Take it back where you got it from. I don’t want this thing in my home.

And the postman says, if I take him back, he will die. So now my brother and I are about to have a stage 4 meltdown in front of the bridge club, which she cannot have, right? And we know that she’s sending our friend away to a certain death. So she says, oh for god’s sakes, all right. Put the monkey in the kitchen. Now your father’s at the hardware store. Now listen, when he comes back and when this bridge club’s over, we will resolve this monkey issue. But in the meantime, you do not touch that box, you do not go in the kitchen, you don’t even look in the kitchen, you don’t smell the kitchen.

You stay out here and when I finish with the bridge club and your father’s home, we will deal with it at that time and not a second before. And then she goes back down to play bridge. But we are 8 and 9 years old. We have a monkey in the box in the kitchen. There’s no power on this planet that is going to keep us out. Now being 8 and 9, you know where all the creaking floorboards are.

So we take off our shoes and we silently creep into the kitchen. You aren’t near that monkey, are you? Of course not, of course not. And we run back to where we were. So we go in the kitchen and we see that the box has a little frayed corner. So we think to ourselves, all right. If we take a little knife, we can help that corner and help Pepe escape so it looks like he just came out on his own because we know he’s like suffocating in there – we just can’t take it. So we get the steak knife out.

And at first we’re tepid and we’re kind of slowly kind of working it to let it open, but pretty soon we just start hacking at the box. And were stabbing at it and the monkey’s starting to screech – dodging this knife coming at it right and left going ah, ah. Finally, boing (ph), out pops Pepe. Now monkeys are very, very, very smart creatures. They do not defecate in enclosed places and he has been waiting a long, long time in that box. And so sadly, now he’s freaked out because a knife’s been plunging at him, he’s been shipped in a shoebox. So now as he screeches at the top of his lungs, bites us with needlelike teeth and runs in the living room, there’s an arc of urine in front of him and a huge trail of defecation wherever he went around that living room.

So now, the women hearing that there’s something screeching inside think, oh my god, what happened – run up the steps with their arms up, going oh my god, what’s going on? Oh my god. In those years, women had huge beehives that were sprayed and stinky and horrible. And Pepe decides at this moment in time that the best defense is a very strong offense and leaps on one of the women and gets entangled in her hair…. RTWT AT Monkey Madness : NPR

Next post: KABOOM! Trump declares houses of worship as essential