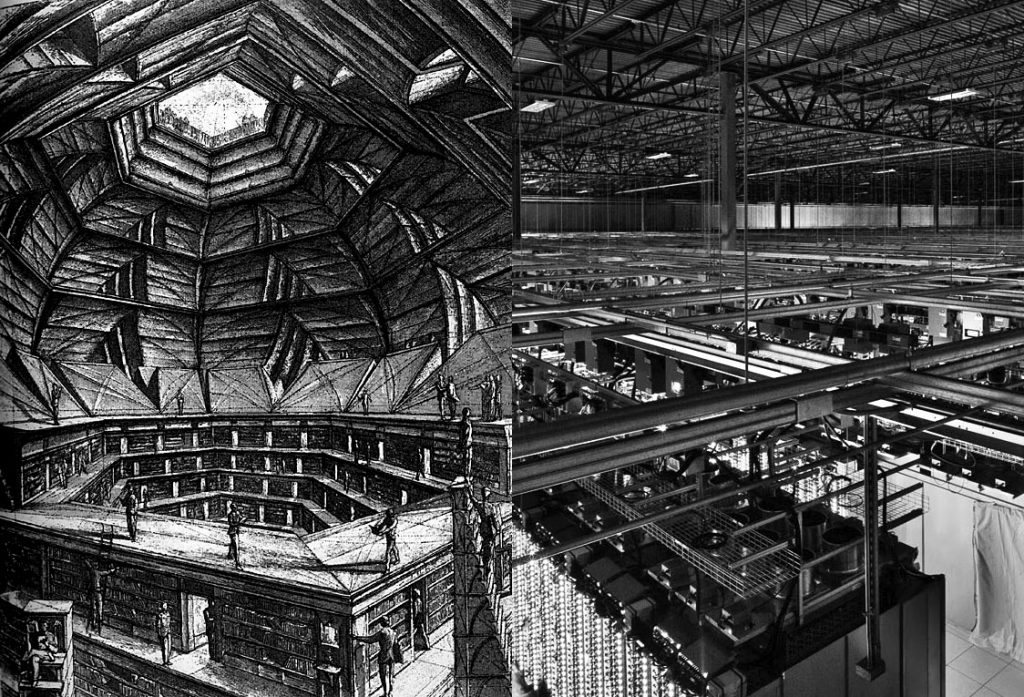 The universe (which others call the Library) is composed of an indefinite, perhaps infinite number of hexagonal galleries. In the center of each gallery is a ventilation shaft, bounded by a low railing. From any hexagon one can see the floors above and below-one after another, endlessly. The arrangement of the galleries is always the same: Twenty bookshelves, five to each side, line four of the hexagon’s six sides; the height of the bookshelves, floor to ceiling, is hardly greater than the height of a normal librarian. One of the hexagon’s free sides opens onto a narrow sort of vestibule, which in turn opens onto another gallery, identical to the first-identical in fact to all. To the left and right of the vestibule are two tiny compartments. One is for sleeping, upright; the other, for satisfying one’s physical necessities. Through this space, too, there passes a spiral staircase, which winds upward and downward into the remotest distance. In the vestibule there is a mirror, which faithfully duplicates appearances. Men often infer from this mirror that the Library is not infinite-if it were, what need would there be for that illusory replication? I prefer to dream that burnished surfaces are a figuration and promise of the infinite. . . . Light is provided by certain spherical fruits that bear the name “bulbs.” There are two of these bulbs in each hexagon, set crosswise. The light they give is insufficient, and unceasing. — Borges, The Library of Babel 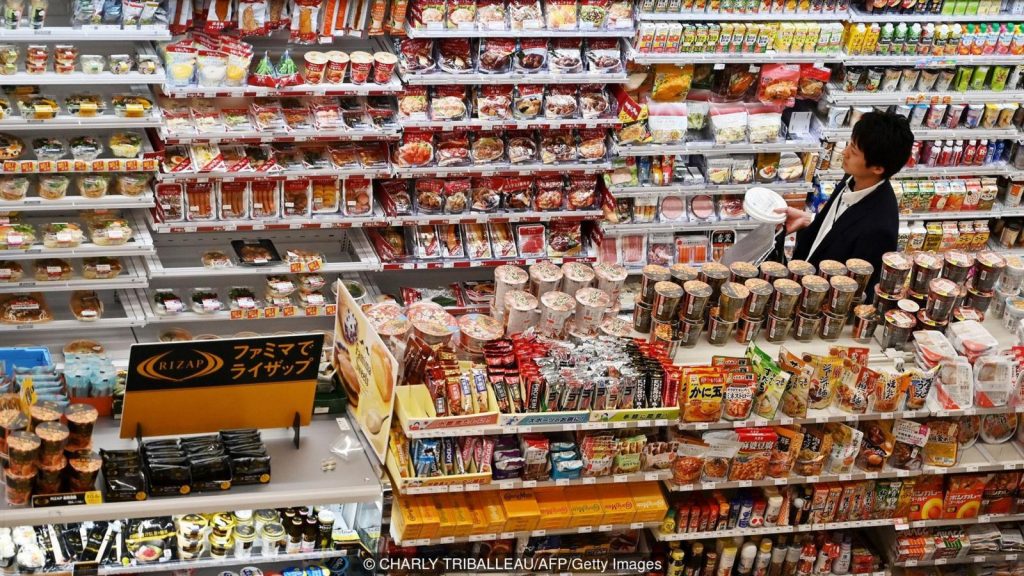 The unique culture of Japanese convenience stores  “A convenience store is not merely a place where customers come to buy practical necessities,” said Furukura in the novel’s opening pages. “It has to be somewhere they can enjoy and take pleasure in discovering things they like.”

Florida man steals mail truck leading to a pursuit up I-95, deputies say  The suspect intentionally swerved and drove the mail truck directly toward the deputy. Estep missed the deputy and swerved the trick toward a different FCSO deputy who was attempting to lay out more stop sticks. Then, when the back tire of the truck struck a stop stick and the suspect lost control of the mail carrier. The suspect overcorrected, causing the truck to crash into a guardrail and flip. 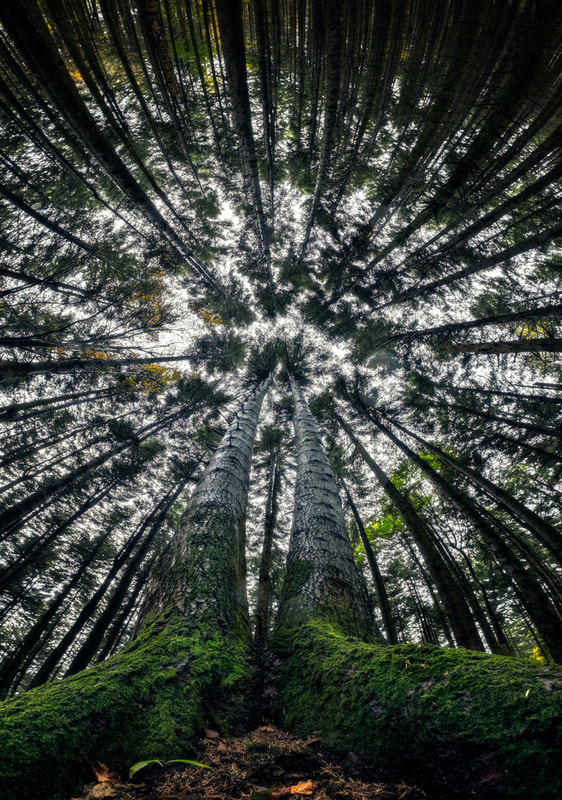 Crown shyness, a phenomenon where the leaves and branches of individual trees don’t touch those of other trees, forming gaps in the canopy. — Trees

“It all starts with the universally applicable premise that people want to be understood and accepted. Listening is the cheapest, yet most effective concession we can make to get there. By listening intensely, a negotiator demonstrates empathy and shows a sincere desire to better understand what the other side is experiencing.” | Cool Tools

Tumblr Users Give “Tips” For Aliens, Showing How Weird Humans Are |  “Humans drink ethanol (in concentrations high enough to be used as an effective as a microbicide or a solvent!) for the express purpose of achieving blood toxicity and disrupting normal brain function… as a recreational activity!”

When the Māori First Settled New Zealand, They Hunted Flightless, 500-Pound Birds   The South Island giant moa clocked in at two meters (6.5 feet) tall. In its time, it was the tallest bird to walk the earth; larger females weighed more than 500 pounds. With their long necks, rotund bodies, and total lack of wings, they must have been an imposing sight. 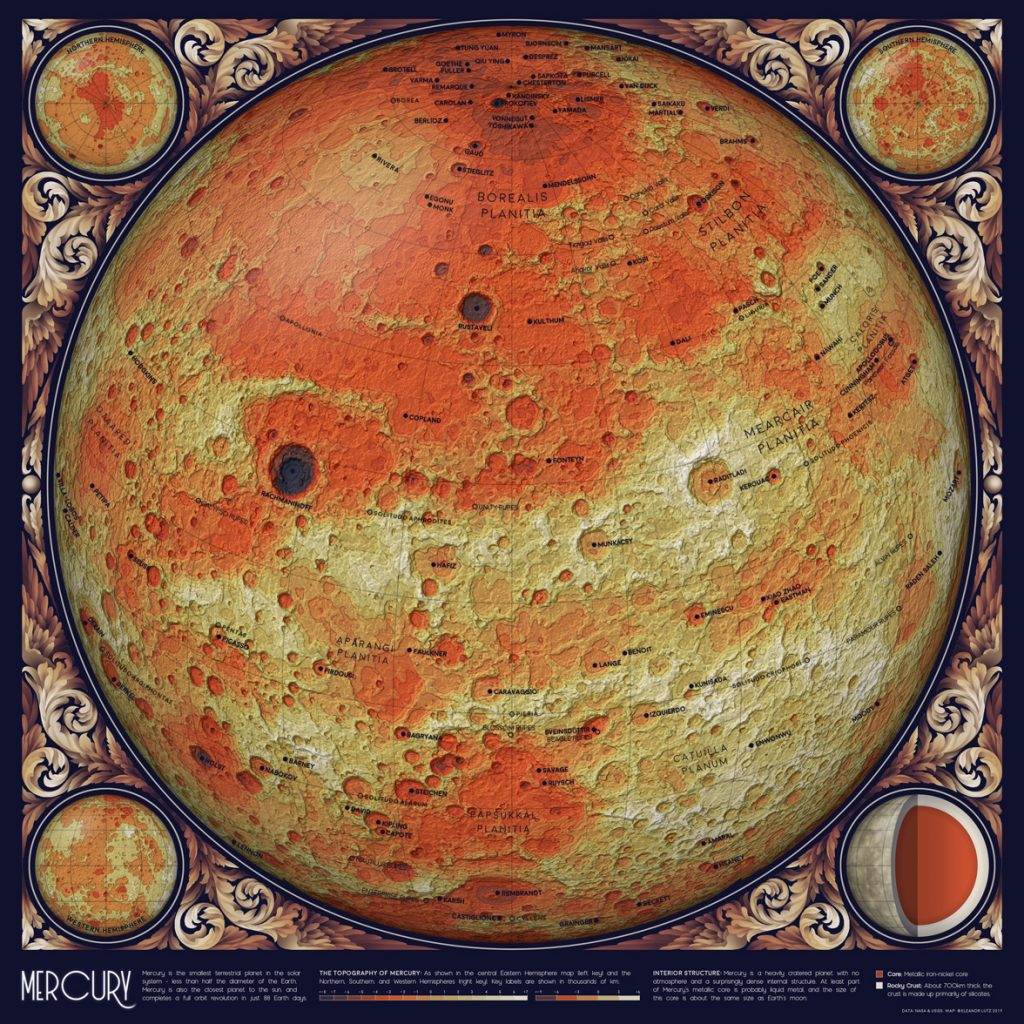 A Topographic Map of Mercury

The origin of white road lines  She took direct action. She got down on her hands and knees and painted a 2-mile-long 4-inch-wide white stripe down the center of the road that passed in front of her house on Indio Boulevard.  She was sure that her example would illustrate the idea’s safety benefits, but change was slow to come. For seven years, she wrote letters and petitioned the county and state to adopt the white lines. 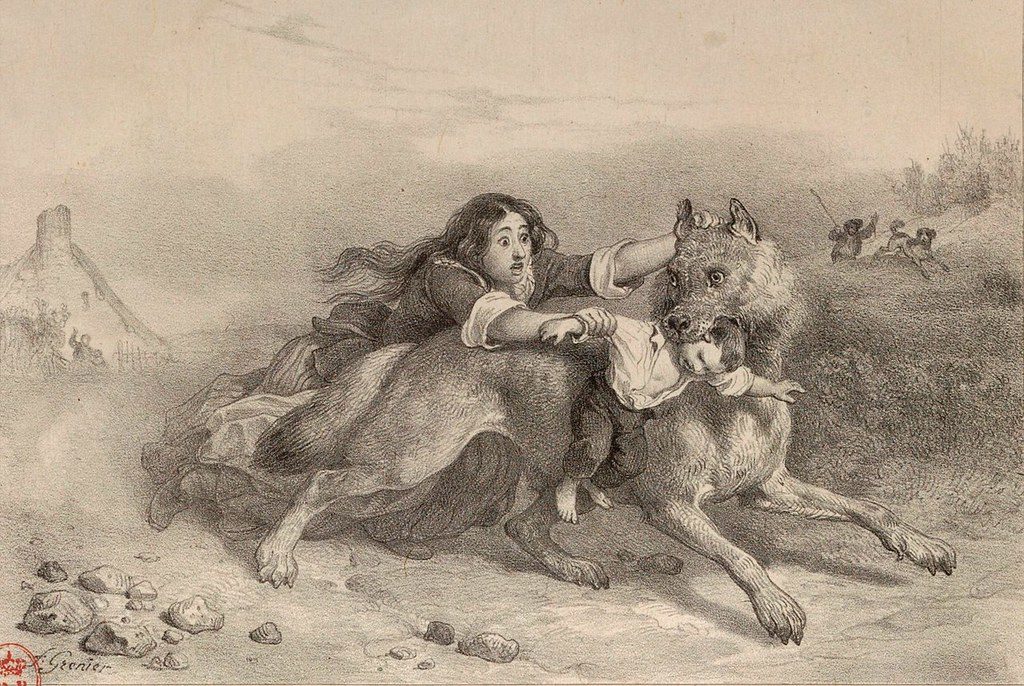 The Beast of Gévaudan (1764-1767)    The rampage of the Beast of Gévaudan was one of the first international news stories. First breaking in the Courrier of nearby Avignon, it was quickly taken up by the papers of Paris and from there spread abroad. A German print from September 1764 shows the Beast, looking more like a quadrupedal kangaroo than a wolf or hyena, attacking an improbably well-dressed man in a rather Teutonic-looking landscape.

Unamusement Park »    I continue to believe that the best way to achieve the aforementioned goal  — shall we call it racial harmony? — is by and through the truth, and not (what is more popular) some infernal combination of lies, nonsense, and wishful thinking. 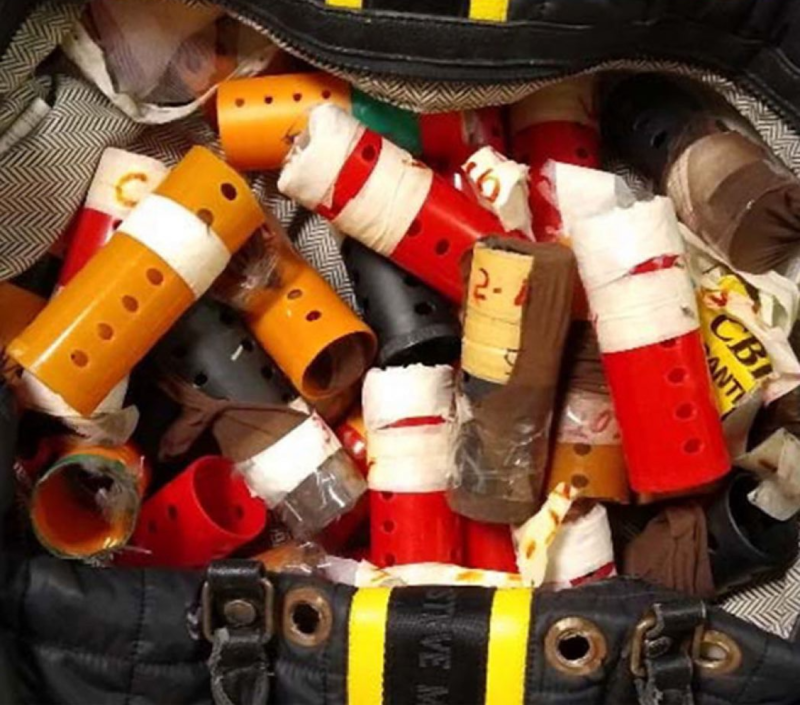 Man Caught Smuggling 34 Birds Into NYC For Bird-Singing Contest  The Connecticut man is said to have planned on selling each bird for about $3,000 making a total $102,000 in profit. In case you weren’t aware of New York City’s fascination with bird-singing competitions, these events aren’t all that uncommon in the boroughs of Queens and Brooklyn.