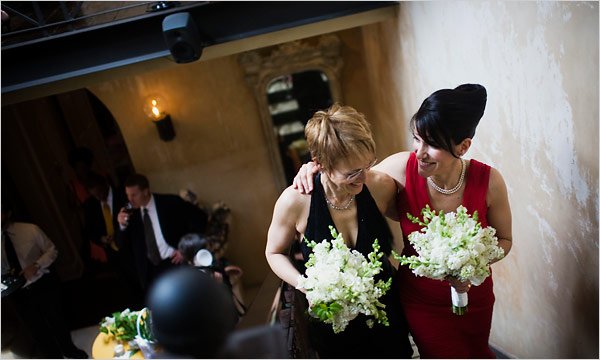 “Let me not to the marriage of true minds
Admit impediments…”

Submitted for your consideration an item from 2009 most notable for its soothing palliative tone in which the previously perverted strives to be normalized. As the age’s intellectual insanity assumes the proportions of a plague, the experience of reading the herald of these plague years, the New York Times, becomes more and more like reading dispatches from the alternate universe of “hoping these changes stick.” That the changes can only stick if the core of the more normative America holds both economically and militarily (even as the ‘changy’ culture struggles to destroy it) is where the hoping enters in.

Still it is an item imbued with sweetness in the coyly named “Weddings & Celebrations” section of the Times. It really has it all when it comes to the modern nature of love in a time of cultural cholera: Vows – Kate Adamick and Kay Diaz – Weddings and Celebrations – NYTimes.com [Emphasis carefully added]

“The two women were introduced Feb. 4, 2008, via an e-mail message from their mutual friend, Jim Rogers, the New York State deputy attorney general in the social justice division, for which Ms. Diaz, 45, is a senior trial counsel….

On Valentine’s Day the women exchanged photographs. “It’s an absolute bonus she is as beautiful as she is,” Ms. Adamick said. They scheduled their first phone call four days later. Lengthy, nightly conversations ensued….

The next day Ms. Adamick flew back to New York from California. To her surprise, Ms. Diaz was waiting for her at Newark Liberty airport with two dozen roses. The connection was instantaneous. “She dropped the flowers on the ground and kissed me,” Ms. Adamick said. “We were making out in the car like two teenagers,” Ms. Diaz said. By the following morning they were engaged. ‘It just came out of my mouth…‘ ”

A little more than a year later, on May 8, the couple were legally married by Jeanne Laughlin, a Connecticut justice of the peace, in a conference room at the Stamford Government Center.

They exchanged yellow pipe-cleaner rings, saving their engraved gold bands for their public ceremony the next day, when Mr. Rogers — who had introduced them — led them through their vows in the three-story atrium of 632 on Hudson, an event space in a 19th-century New York town house.

Mr. Rogers said, “You may both kiss the bride,” and their 96 friends and family cheered as the couple smiled exuberantly.

“And,” as Walter Cronkite would totalled up the whole passel of perfection if he’d attended, “That’s the way it is.”

Having not been invited to their event space, all I can say is that they seem like a nice, attractive couple and that I wish them all the happiness they can garner from the world. Life’s tough enough on the denizens of this relentlessly advancing and evolving world, and tougher still without love.

And yet for all that it seems to me that the report of the affair as scribbled by the oddly yet predictably named “Devan Sipher” in the ‘paper of [the broken] record’ is trying too hard to retain a deadpan affect; a state in which the writing does not “dumb it down” so much as it “blands it out.”

The tone may be a spin-off of drawing this duty, but Sipher’s report of love amongst our blithely ignored ruins is more revealing of how things stand in the floating world of our hallucinating elite than a dozen “scientific” surveys of contemporary human happiness. “VOWS: Kate Adamick and Kay Diaz” tells us how haute love is done in the high towers of the Stamford Government Center’s technoworld.

First we have the electronic introduction by the strangely accredited “New York State deputy attorney general in the social justice division.” I mean, who knew that the State of New York was so deeply committed not to mere justice but to “social justice” that it would field a whole division to handle same? I suppose it comes in handy for those litigants or victims who, having lost their battle for plain justice, can appeal for “social justice” which presumably has its own body of separate but equal laws.

The Lesbian to Lesbian intro was, as noted, an “electronic” introduction in which souls destined for kismet but distant in space can hope to span the great divide of the fly-over states that unfairly keep New York and California apart. One of the advantages of such an introduction is that it allows intellectuals to mainline each other’s thoughts before the more mundane and inconsequential elements of looks and mannerisms can interfere with the shared gay brainwave — an essential credential of love today. Knowing the the whole of the beloved’s mind before the body interferes is essential if small hiccups in perfection are to be overcome:

“Kay had everything on my list,” Ms. Adamick said, “except she was a vegetarian.” When Ms. Diaz disclosed this particular trait, Ms. Adamick wrote her, “I love animals. Medium rare.”

Ah, love, let me not have hamburgers and ribs to the marriage of true minds [and buns] breed impediment.

This mainlining of each other’s thoughts used to work better in pure ascii form when email was in the stone age and no photos could be attached. Now, however, photos can be attached and such attachments are a sign that modern love is ready to be taken to the next level. It must be love

“that looks on tempests and is never shaken.”

In this case, the sweetness of exchanging photos on Valentine’s Day is especially endearing.

But love cannot ever be confined to cyber-realms to be real, but must sooner or later

“bear it out even to the edge of doom!”

Yes, it must descend from such spiritual plains into the world where it shall be

“the star to every wandering bark.”

— and must ultimately come down to Earth even if that Earth is the airport near Newark.

From town car make-out sessions to the final ceremony, our modern oh-so- lipstick lesbian love affair does not miss a chance to make history glisten.

First comes the mundane out-of-state legalistic wedding in Connecticut exchanging oh-so-ironic “yellow pipe-cleaner rings,” and then the high-toned public ceremony where it counts replete with the “engraved gold bands” in the “event space” in a 19th-century New York town house.

And at the last the little touch of cock-the-snoot sprinkled on the whole thing when the male yenta of the “social justice division” whipped out a little “social justice” of his own with his killer punch-line, “You may both kiss the bride.”

…. and their 96 friends and family cheered as the couple smiled exuberantly.

“Exuberantly…” Oh really? Such a weak and wet adverb to such a strong and determined tale of love in a Brave New Century trying to make all that was old new; a century trying to remain impervious to history with every ounce of hope it can muster.

We have all been here before throughout the Clinton years and into the first three quarters of 2001 before it all went smash. Maybe this time our luck will hold   though all of history tells us we are merely whistling through the graveyard.

Even to my tin ear it is pleasing to hear the ever-rising hymns of lesbian love, though we all know that they only serve to drown out the approaching waves of blood that will determine the fates of many millions; New York dwellers such as Kate and Kay chief among those that, sooner or later, will burning like human torches in their wonderful target city.

On the other hand, since nothing is written, perhaps it will be their brave new lesbian world that survives after all. I, for one, certainly hope so. I’d like a world in which their love and all love begun on Valentines Day  survives at least to the silver anniversary. I just wish I had more hope than rope for their change.

Failing that, I still stand with the bard who notes that,

“Love alters not with his brief hours and weeks,

But bears it out even to the edge of doom.”

If this be error and upon me proved,
I never writ, nor no man ever loved.