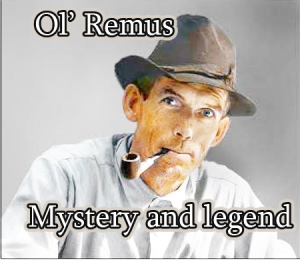 [NOTE: I DO NOT have any independent confirmation of the death of Remus. All there is, so far, is a comment in this thread from an unknown and previously unseen commenter/lurker. We can assume but we do not know. He is still listed here as MIA.]

Many readers in comments and email are concerned about the lack of updates at the Woodpile Report. I am concerned as well.

I’ve written Remus a couple of times over the last week or two but have, to date, received no response.

I’ve left a query comment over at the new Western Rifle Shooters site but haven’t heard from them to date.

In an effort to dispel all the wild rumors I offer this advance notice of a forthcoming announcement at woodpilereport.com.

It is taking some time to get to as there are more important things for us to do in the immediate but it will be posted soon.

The Woodpile Report will no longer be updated.

His family regrets to announce that Ol’ Remus recently met his demise.

In accordance with his desire for anonymity as author of The Woodpile Report his identity as well as details about his life will not be provided.

An archive here {at woodpilereport.com} of available past issues is pending.

Stay away from crowds.

H/T to all for the kind comments in your blogs, pages and comments.

While his family, and yes, I am family, close enough to him that I have known him every single day I have been alive – until he died of course, wishes ‘friend of wife” had not posted her comments anywhere containing details of his death, which are true – but that’s all ya get for real info, the fact is that Ol’ Remus has indeed died.

While rumors will persist without a link to an obituary or the divulging of other revealing information concerning who Remus was it is from the respect of his wishes to remain anonymous that we, his family, act in this manner.

There are very few on the internet who know who Remus was but rest assured he was greater in real life than his writings showed him to be.

This post may be freely shared of course, and I have no doubt it will be – an important take from this is the H/T thanks offered to all, not just readers here, but everywhere.

It is my honor to post this message here originally.

Lastly – No, I am not posting from Stockholm, Sweden as the logged IP address will show.

Next post: The Two Americas in Miniature: A Time for Choosing

Previous post: Just another relaxing afternoon on the deck