MASKS AND MANDATES? AGAIN? JUST. SAY. NO. ( from the Wall St. Journal) 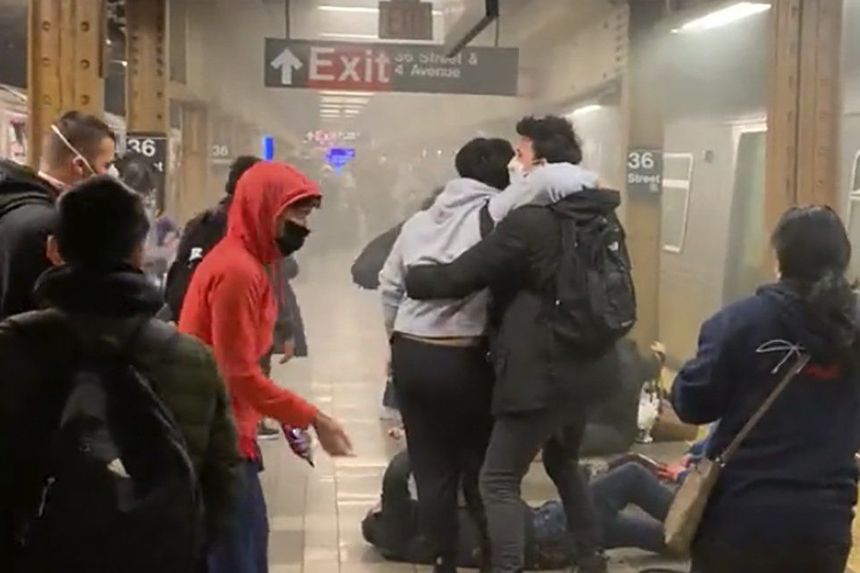 FROM: A Crime Scene Where the Victims Wore Masks – WSJ

As terrified passengers stumbled from the train at the 36th Street station in Brooklyn last week, it was noticeable how many of them were complying with the mandate that to enjoy the privilege of venturing into the underground abyss known as the New York City Subway system, you must be wearing a face covering.

There they were, desperately fleeing a gunman or bravely helping rescue injured passengers, but still dutifully playing their part in the absurdist theatre of pandemic regulations scripted and directed for us by our little overlords.

Those flimsy pieces of fabric might have offered some minimal protection from the noxious fumes of the smoke bombs that Frank James allegedly set off in that subway car. But they were never going to be a match for the bullets fired from the 9mm semiautomatic handgun recovered at the scene. Many innocents were wounded, and it is something of an Easter miracle that no one was killed.

For the millions of people who have dared to ride the city’s subway this year, the greatest danger to life isn’t some escaped molecule of a virus of rapidly diminishing potency. That exiguous risk is dwarfed by the combined threat of being pushed in front of an oncoming train, stabbed, hit in the head by a psycho with a hammer, robbed at gunpoint or being sexually assaulted. The number of robberies on the subway so far in 2022 is up 72% from the same period in 2021. There is no easily discoverable record of how many maskless riders have been struck down this year by Covid.

It’s hard to think of a tableau that better captures the disordered priorities of our governing classes than that scene in Brooklyn.

The politicians and bureaucrats who run almost all major cities, many states and the federal executive branch seem to care more about preserving the symbol of their authority that mask mandates represent than about the actual physical safety of citizens. In their warped ideology, crime is the result of material deprivation, prejudice and wicked police officers. The real need for enforcement is shown by those tempted to show their faces in public.

Masks are only an example. It’s hard to recall a time in recent American history when there has been such a monumental mismatch between the priorities of the people who govern us and the needs of the people. On issue after issue—crime, inflation, immigration—we have leaders so entrenched in their ideological priors that they seem incapable of, even uninterested in, addressing the actual challenges faced by hard-pressed Americans.

Joe Biden was at it again last week with inflation. It has been clear for a long time that the return of this old horror is the largest threat to living standards and economic stability. But acknowledging that would have required the Democrats to abandon their ideological goals of ever-higher spending and forced them to reorder their governing priorities. So they didn’t.

Now, unable to dismiss it anymore, they have offered not a serious set of policies to relieve inflationary stresses, but a series of public-relations gimmicks that will have virtually no alleviating impact. Lifting the summertime ban on blended ethanol fuel will be about as effective in addressing higher energy costs as publicly shaming greedy corporations or blaming Vladimir Putin.

On immigration, the administration instinctively reflects a progressive mindset that regards border control as racist. It spent the better part of a year undoing the immigration restrictions imposed by its predecessor. As the inevitable border surge swelled, it feigned some concern. Now, as apprehensions of aliens in border areas reach their highest level in 22 years, what is its response? The repeal of Title 42, a measure that had been effective in curbing illegal crossings.

Interestingly, as the pandemic rationale for that measure is no longer deemed operative, the administration insists elsewhere that the emergency continues when it suits it. So, even as the nation yearns to return to normality, the Centers for Disease Control and Prevention last week announced another extension, for 15 days, of the federal mask mandate on airplanes and public transportation. It had been scheduled to end this Monday at long last. (And on Monday a judge in Tampa, Fla., held that the mandate exceeded the CDC’s statutory authority.)

On it goes. from needless bailouts for student loans to a fixation on sacrificing energy capacity in pursuit of long-term climate goals, Democrats display an unerring focus on aims Americans don’t see as pressing—or even necessary.

Obdurate insistence in the face of evidence of both rising unpopularity and accumulating failure is a common political flaw. No leader willingly acknowledges the irrelevancy of his policies. but it seems to be especially embedded in the modern progressive philosophy that the rulers know best; that they, by dint of their scientific expertise and moral superiority better understand our true needs.

Like all such authoritarian conceits, it doesn’t survive long in a democratic environment. That helps explain why leftists are so panicked at the thought of losing control over information, why they feel so threatened at the thought that a communications channel such as Twitter might fall out of their hands. Anything that challenges their right to go on pursuing their priorities is “disinformation.”

But it won’t take the intervention of a rogue billionaire to restore democratic equilibrium. A popular reckoning is coming.