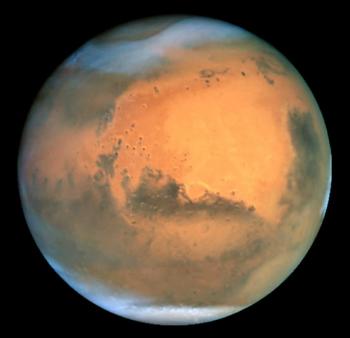 There’s a hell of a nice universe next door. Let’s go.”

For the first time in decades, the possibility of going to Mars has been brought forward and placed on the table for discussion and debate. Not only that, designs for Mars rockets have been drawn up and prototypes have been built and are nearing the launch phase.

I’ve been carrying on a conversation with a friend over the past few weeks about the immediate ramifications of Mars, The Going To. That and the larger issues that Mars illuminates. Those issues came to mind this morning when an email from the friend mentioned above said:

….if, indeed, life and intelligent life are as prevalent as we think they should be, why aren’t we (a) intercepting millions of alien broadcasts in the electromagnetic spectrum, and (b) positively inundated with alien landings?

One reason that is disturbing in a deep way is that we’re all wrong, and we’re all alone…What if, in all those billions of galaxies, we’re it?

Gives me the shivers.

….Look at us, mankind. We’ve been given the gift of intelligence, and the ability to expand our ecosystem out into space, where, with some significant but not insurmountable effort, we could spread like a proverbial virus.

“Oh heavens above,” I thought. All we need to do is figure out how to make a wheel within a wheel to take us away to the middle of the air.

But the Religion of Intelligent Life Is Everywhere (ILIE) requires proof that our Extraterrestrial Civilizations (ETC) exist and from that you get the High Church of SETI ( Search for Extraterrestrial Intelligence) scanning the skies until their deep jungle telescope collapses.

All we need is one, just one, captured episode of some far-stars afternoon sitcom and we’ll know ILIE is the one true religion. It will show us that we are not, as mentioned above, a fluke of the universe; that we are not alone.

That said, I suspect that we are, indeed, alone. Or, if not exactly alone, alone enough that it makes no practical difference.

Many years ago I read a stirring beautiful book by Guy Murchie called The Seven Mysteries of Life. It is a complicated bit of scientific romanticism and I won’t go into it in detail. Besides I’m sure if I re-read it now it would seem antiquated, even quaint. But at some point in that book, Murchie began to take on the Googlenumber of stars – X stars = X Stars Supporting Intelligent Life proposition that forms the foundation for the ILIE Religion. Murchie’s Goldilocks argument removes stars from the board of life for being in the center of galaxies, being multiple, being too big, too small, too young, too old, too hot, too cold etcetera, etcetera, and turtles all the way down until almost none are just right. This gets you a much smaller number of stars with planets and then, through the application of other elements, makes that number smaller and smaller until you get to, well, the single planet on which we have found intelligent life, Earth. In sum, Murchie’s “countdown to one” is at least as compelling as the arguments for ILIE.

But they are both still religions and we are returned, just when we thought we’d escaped into the one true faith of ILIE, back to a situation of dueling faiths each playing a slightly different tune even if the underlying harmonic blends. But let’s boost the all-alone track for now and dampen the ILIE part of the mix. Let’s say that we are all alone and that Murchie’s argument is correct. After all, the all-aloners do have a planet to stand on. The others need at least two planets to get going.

If we are alone, if we are a fluke, then what we do will hardly matter to anything other than ourselves. Hence, we need to take responsibility for our actions as a race. If we are all that is we need to keep going — if only from the imperative that life must keep going even if it is to no purpose other than simple replication. To achieve continuity with any certainty we have to create, it seems to me, a second planet just as an insurance policy, a safe haven. This is, to my mind, the most cogent argument for Mars. Elon Musk seems to agree with me and though simple agreement is not proof of a proposition, I’ll side with Musk.

READ THE REST — FOR MEMBERS (FREE OR PAID) — AT THE NEW AMERICAN DIGEST’S   Mars? Man, you gotta go.