Mars? In my lifetime?

If God’s grace allows it, I may well live to see my boyhood’s fantasy become a reality. Then there will be at least 2 (Two) planets with life on them. And if there are two there can be, now or along the corridors of God’s deep time, through God’s grace, more; Many, many more.

Though our bodies be of infirm flesh,
Our thoughts enslaved to blood and heat;
Though we scan the skies with eyes of beasts,
Still, we would walk in fields of wheat,
And from such sheaves deduce the laws
Of war and wealth and God, and pause
To build our towns and temples, our cobblestoned streets,
And gird the very globe with grids,
And make our maps and take our measures,
And populate the final stars with our myriad
Grown from one, in the harsh soil, our single treasure.
— The Wheatfield

From The Million Year Picnic by Ray Bradbury:

He dropped a leaf in the fire.

“I’m burning a way of life, just like that way of life is being burned clean of Earth right now. Forgive me if I talk like a politician. I am, after all, a former state governor, and I was honest and they hated me for it. Life on Earth never settled down to doing anything very good. Science ran too far ahead of us too quickly, and the people got lost in a mechanical wilderness, like children making over pretty things, gadgets, helicopters, rockets; emphasizing the wrong items, emphasizing machines instead of how to run the machines. Wars got bigger and bigger and finally killed Earth. That’s what the silent radio means. That’s what we ran away from.

“We were lucky. There aren’t any more rockets left. It’s time you knew this isn’t a fishing trip at all. I put off telling you. Earth is gone. Interplanetary travel won’t be back for centuries, maybe never. But that way of life proved itself wrong and strangled itself with its own hands. You’re young. I’ll tell you this again every day until it sinks in.”

He paused to feed more papers to the fire.

“Now we’re alone. We and a handful of others who’ll land in a few days. Enough to start over. Enough to turn away from all that back on Earth and strike out on a new line–”

The fire leaped up to emphasize his talking. And then all the papers were gone except one. All the laws and beliefs of Earth were burnt into small hot ashes which soon would be carried off in a wind. Timothy looked at the last thing that Dad tossed in the fire. It was a map of the World, and it wrinkled and distorted itself hotly and went– flimpf–and was gone like a warm, black butterfly. Timothy turned away.

Michael was crying loudly, and Dad picked him up and carried him, and they walked down through the ruins toward the canal.

The canal. Where tomorrow or the next day their future wives would come up in a boat, small laughing girls now, with their father and mother.

The night came down around them, and there were stars. But Timothy couldn’t find Earth. It had already set. That was something to think about.

A night bird called among the ruins as they walked. Dad said, “Your mother and I will try to teach you. Perhaps we’ll fail. I hope not. We’ve had a good lot to see and learn from. We planned this trip years ago, before you were born. Even if there hadn’t been a war we would have come to Mars, I think, to live and form our own standard of living. It would have been another century before Mars would have been really poisoned by the Earth civilization. Now, of course–”

They reached the canal. It was long and straight and cool and wet and reflective in the night.

“I’ve always wanted to see a Martian,” said Michael. “Where are they, Dad? You promised.”

“There they are,” said Dad, and he shifted Michael on his shoulder and pointed straight down.

The Martians were there. Timothy began to shiver.

The Martians were there–in the canal–reflected in the water. Timothy and Michael and Robert and Mom and Dad.

The Martians stared back up at them for a long, long silent time from the rippling water. 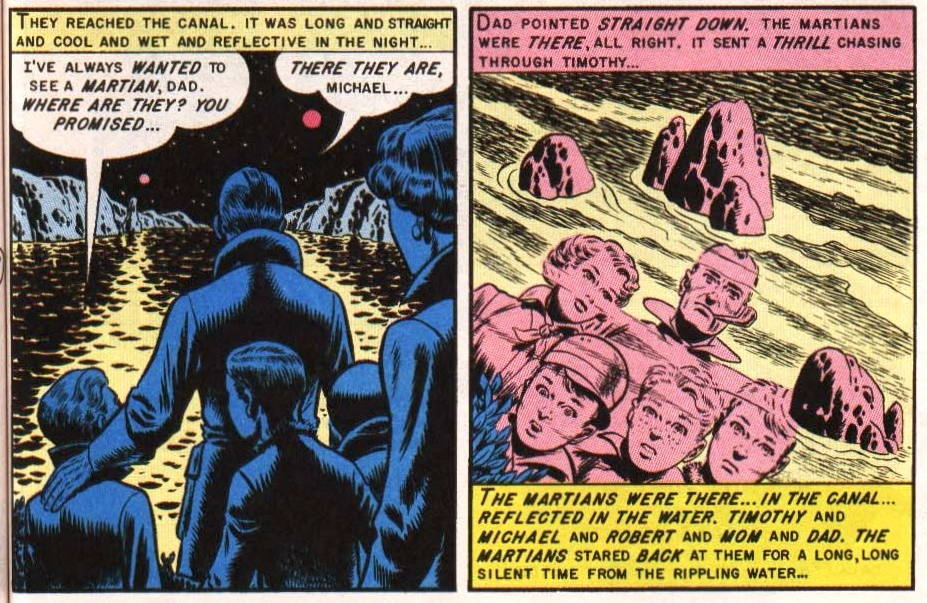 Next post: Strange Daze: Of Sploosh, Rasputin, and Kneepads

Previous post: Nukes: The Time for a Live Demo Is Long Overdue